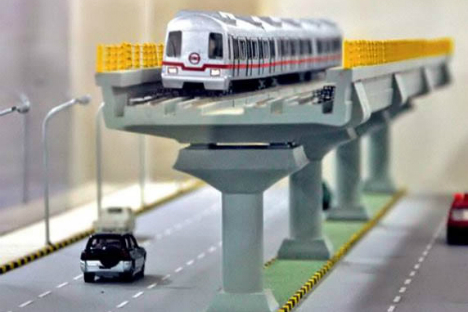 The project involves construction of 8 kilometres of rails and 12 stations in Kochi. Source: Press Photo

Moscow-based company wants to participate in the tender to construct an elevated metro line in the city of Kochi.

Moscow's engineering and construction giant Mosinzhstroi is bidding for the right to build a $930 million elevated metro line in India in an effort to tap into the country's booming infrastructure market, the company said Monday.

Mosinzhstroi, which has been involved in a number of large-scale projects in the Russian capital, joined forces with an Indian peer, Mumbai-based Pratibha, to participate in a tender announced by state-owned Delhi Metro Rail Corp.,  Mosinzhstroi chief executive Sergei Volkov told The Moscow Times.

The project involves construction of 8 kilometres of rails and 12 stations in Kochi, one of India's major ports on the west coast. Local authorities expect the work to be completed by 2016.

“India is an untapped and promising market where huge investment is being made into infrastructure development, so we are committed to working there,” Volkov said.

A company that has a local partner could become a market leader, she said.

Infrastructure development is one of the most promising sectors of the Indian market, with investment in rail construction, including subway, estimated at $65.5 billion between 2007 and 2012, Kommersant reported Monday, citing figures by McGraw-Hill Construction.

Among other cities where metro construction is planned in the next few years are Mumbai and Chennai, the report said.

Volkov said Mosinzhstroi, which has already won two contracts totaling 5 billion roubles ($167.2 million) to build a sewage system in India, would open branches in Delhi and Mumbai if it wins the current tender.

The Delhi Metro Rail Corp. is slated to announce the results of the tender next month, he added.

Pratibha could not be reached for comment Monday, but an unidentified employee of the company told Kommersant that it had entered into a consortium with Mosinzhstroi.

Founded in 1968, Mosinzhstroi is one of the oldest companies in Moscow that builds roads, bridges and other facilities.

Among the projects it has been involved in are the Okhotny Ryad shopping center near the Kremlin, the underground infrastructure of the Moskva-City business district and an upgrade of city infrastructure ahead of the 1980 Summer Olympics.