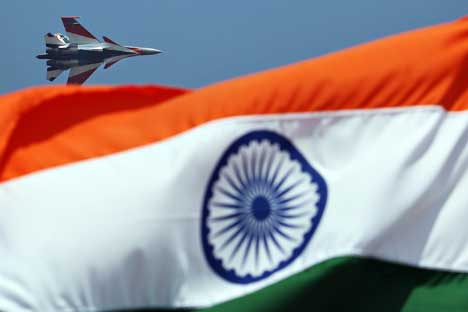 Alexander Fomin believes, that the reason is not because of any deterioration in the quality of arms and equipment, but rather the increased competition.

In his opinion, Russia is losing arms markets in Asia and the Middle East, but gaining new ones in Latin America and Africa.

"Markets we have lost are being replaced by new ones, such as Venezuela"

"Markets we have lost are being replaced by new ones, such as Venezuela. We are rediscovering long-forgotten Soviet markets like Peru. In Africa, the list includes Mali, Ghana, Tanzania, and Uganda; in Asia, Oman," said Fomin, ahead of the opening of the "Aero India-2013" International Exhibition in Bangalore, India.

As director of the FSMTC, Fomin is the head of the Russian delegation at the exhibition to take place on February 6-10.

He acknowledged that because of the tragic events in the Middle East and the Mahgreb, Russia had lost a number of markets. "It is due to the regional conflicts and wars. Cooperation with Libya has been temporarily suspended; supplies to Egypt and Iran have fallen off, and we are being hindered in Syria. That's a fact. We lost Iraq, and Afghanistan is heading the same way," he told RIA Novosti.

He also explained a number of setbacks in tenders for contracts with India's Ministry of Defense. According to Fomin, it is nothing to do with the quality of Russian-made products, but simply that competition in the global market is heating up.

"I agree that there is a discernible trend. But if you are hinting that this trend is the consequence of a decrease in quality, the answer is no and no again. There are quality-related issues, we don't deny that. But our main competitors face exactly the same problems. The issues are solvable," stated Fomin, in response to a query about Russia's failure in recent years to win some major military contracts in India.

"This trend is not related to a decline in quality or an increase in the cost parameters of our output. We are still much cheaper than our western competitors," said the director of the FSMTC.

He noted that the trend affected all major suppliers of arms: "It applies to all and is essentially a matter of competition. We live in a tough competitive environment inhabited not only by our long-term rivals — the U.S. and Europe, but now China, too," remarked Fomin.

"We're not short of political lobbying, either. The president and the government, as well as all the core ministries involved in this process — the Ministry of Defense (MoD), the Ministry of Foreign Affairs, and others — all lend us their support, and that's very welcome," he underlined. "Without that assistance, we would not be where we are today. But our competitors also enjoy the same kind of support."

"There was once a time when India's relations with the West were stand-offish. That's all changed: now there’s more freedom, embargos have been lifted and gates opened, which our competitors have rushed through headlong. As a rule, winning or losing a tender is not always about technical or economic matters. The totality of factors needs to be taken into account, including, perhaps, the buyer’s intention to diversify weapons suppliers. After all, arms are a delicate matter. It is a crucial area of ​​cooperation not only economically, but also politically," said Fomin.

In the words of Fomin, the tense international situation is "redividing the world map." "Despite the fierce competitive struggle, our industry is still very much operational," underscored the head of the FSMTC (reports ITAR-TASS).

For the record, Russia's military industry has missed out on a number of important Indian contracts in recent years. 2011 saw the loss of a tender to supply 126 fighters. The bidding aircraft were Russia's MiG-35 (manufactured by RSK MiG), Sweden's Gripen (SAAB), Europe's Eurofighter Typhoon (consortium), France's Rafale (Dassault), and the USA's F/A-18 (Boeing) and F-16 (Lockheed Martin). The spoils ultimately went to the French. In the past, India's MoD has shown preference to the USA's CH-47 Chinook heavy transport helicopter (built by Boeing) over Russia's Mi-26T2.

Speaking about Russian hardware due to be presented at the exhibition, Fomin made particular mention of a new full-scale combat simulator for the MiG-29 fighter. "It is truly unique. We're ahead of the game with this one and believe that it will be in great demand," he said.

The simulator was due to be delivered to India in the event that the MiG-35 (a modification of the MiG-29) won the Indian Air Force tender for the purchase of a new multi-role fighter, but it lost out to France's Rafale.

Other full-scale models of Russian hardware to be displayed at Aero India-2013 include the Ka-226T helicopter, which is now in India in connection with a tender, and fighters flown by the Russian Knights aerobatic team.

"Unfortunately, there will be no other full-scale models of Russian equipment at the show," said Fomin.

However, he pointed out that Russia's participation in the Indian air show would be significant. Many Russian companies will provide information in the form of posters, 3D demonstrations, wall sheets, and mock-ups.

"JSC Almaz-Antey alone will present 79 products," said the director of the FSMTC.

He also announced that by the end of this year Russia would supply India with seven MiG-29K carrier-based fighters. "Under a contract signed in 2010 for the supply of an additional 29 MiG-29K shipborne aircraft (in December 2012), the first four units have already been exported. Seven more are due to be delivered by end 2013," said Fomin.

It is planned that all the aircraft will be based on board the INS Vikramaditya aircraft carrier (formerly the Admiral Gorshkov), which is expected to arrive in India in the fall, and on India's first domestically-built aircraft carrier, currently under construction at a national shipyard.

He also noted that the first prototype of a new fifth-generation fighter jointly developed by Russia and India could appear in 2015-2016.

"The first prototype will appear in a few years' time, after which a decision will be made about putting it into production and how many," said Fomin.

According to him, all the work is right on schedule. "The contract is being fulfilled. The preliminary design work is complete, and we are now moving to the development stage. An experimental prototype will be built, and I see no reason for concern," said the head of the FSMTC.

He noted that neither India nor many other countries possessed such an aircraft. "It is a worthwhile aspiration for any country. India has been actively investing its own scientific capabilities and technological know-how in the project. Both parties have contributed equally in terms of financing," added Fomin.

The head of the FSMTC also announced the signing of a contract to integrate the new Russian-Indian BrahMos cruise missile on board the Su-30MKI multi-purpose fighter, which is being manufactured in India under a Russian license.

India is already considered to be the world's largest importer of arms. This year, the Indian government has set aside $9.4 billion for arms procurements, with most of the money ($7.7 billion) to be spent on Russian weapons. Indian contracts account for a total of 60% of Russian arms exports. This year, Russia is due to supply the country with 40 Mi-17V-5 helicopters, 21 Su-30MKI fighters (licensed assembly contract signed in 2000), 12 Su-30MKI fighters (contract signed in 2007), and nine MiG-29K/KUB carrier-based fighters.

The largest contract in terms of price will be the handover of the INS Vikramaditya to the Indian Navy in December of this year. The cost of the aircraft carrier is slated at $2.34 billion.