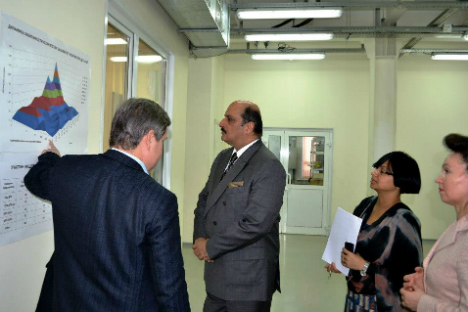 India’s ambassador to Moscow, Ajai Malhotra paid a five-day visit to the cities of Novosibirsk and Akademgorodok. Source: Press Photo

With Novosibirsk's distinguishing feature being the application of advanced scientific technologies of production, the region is specially looking for cooperation with India.

Earlier this month, leading a delegation, India’s ambassador to Moscow, Ajai Malhotra with his wife Ira Malhotra paid a five-day visit to the cities of Novosibirsk and Akademgorodok to explore the prospects of the development of India’s cooperation in trade, economic, scientific, technological and educational fields with the Russia’s Novosibirsk region. Malhotra discussed with the region’s high officials the great opportunities to enhance bilateral cooperation in trade, investment, S&T, culture and other fields, in view of the good trade and economic ties that exist between India and Novosibirsk region.

Located in central Russia, Novosibirsk is one of the country's leading industrial, scientific and economic hubs. It has strategic tie-ups with China, Japan and South Korea, and India is the latest country in its sights for potential joint business opportunities and investment. With Novosibirsk's distinguishing feature being the application of advanced scientific technologies of production, the region is specially looking for scientific and technological cooperation with India. Potential areas of cooperation identified by the regional teams are energy efficiency, water and materials technology, automotive sector and the IT and biotechnology industries.

Novosibirsk has grown very rapidly in the past decades. It is the largest industrial, scientific, cultural and administrative centre east of the Urals located at the intersection of the Russia’s main railway lines and highways. A well-developed system of waterways used for delivering goods to the north ensures trouble-free operations for oil companies.

He also met with the Russian Academician Fyodor Kuznetsov and other prominent scientists of the Siberian Branch of the Russian Academy of Medical Sciences and discussed with them the prospects of cooperation in different fields with special attention to further development of contacts in science and technology. The sides also discussed cooperation in the sphere of coal industry and pharmaceutics.

During the talks with his counterparts, Malhotra emphasised the urgent necessity of the development of cooperation between scientists of the two countries. He also expressed his willingness to assist in the implementation of bilateral projects approved by the governments of India and Russia.

On his part, Academician Kuznetsov noted that exploration of semiconductor materials and crystals for the manufacture of detectors are promising from the point of view of both countries. According to him, silicon is of particular interest for India. The two sides expressed interest in working together, particularly in the area of industrial particle accelerators and solar energy.

It may be recalled that recently a meeting of specialists from India and Novosibirsk was held. There was an active two-day discussion of the results. It was agreed that India would support the entering of seismologists from Novosibirsk into the existing agreement between the Academies of India and the Russian Federation to commence the active cooperation.

“Today there are significant opportunities for development of business contracts. In favour of this fact speaks considerable growth of the trade turnover between the Novosibirsk region and India in 2012,” Malhotra said.

In 2011, the regional export to India was more than $5 million. Within nine months of 2012, it increased to $16.8 million. The share of import increased too, thanks to the supplies of cereals and pharmaceuticals, according to the Novosibirsk government press service. Novosibirsk region is planning to increase the trade turnover with India by tenfold annually, in the near future.

“We intend to tenfold increase trade with India. The area will be the first Russian region, to open an office in India to establish direct contacts.” Yurchenko’s predecessor Viktor Tolokonsky had said during his visit to New Delhi in October 2011, for the presentation of the region to businesses in India. He also invited Indian investors to participate in the creation of industrial park, in Novosibirsk, making a pitch for greater trade and scientific cooperation.

During Tolokonsky’s visit, two agreements were signed between Indian and Russian companies. The $180-million Sona Group inked an agreement with two Russian firms - Power Electronics of Siberia and Sibtechnomash - to conduct joint research in automotive electronics. Sibagropribor, another firm from Novosibirsk, signed an agreement with New Delhi-based Benny Impex for supply of milk analysers.

In Novosibirsk, Malhotra visited Nikolas Roerich Museum. Besides, having a look of the exhibition halls of the Museum, a round-table meeting was held, during which joint cultural projects were discussed.

“Many people contributed to development of friendship between India and Russia, but the role of Nicholas Roerich in this area was special,” Malhotra said. Among the priceless exhibits at the Museum, is the summer coat with a hood that belonged to Helena Roerich, the wife of Nicholas Roerich. The Roerich Museum constructed by the efforts of thousands of people of goodwill in Novosibirsk was formally opened in October 2007.

“I was highly impressed by the size of the Museum. It was a positive thing that the painters’ works had annotations,” the Indian ambassador said. He also warmly praised the staff of the Roerich Museum.