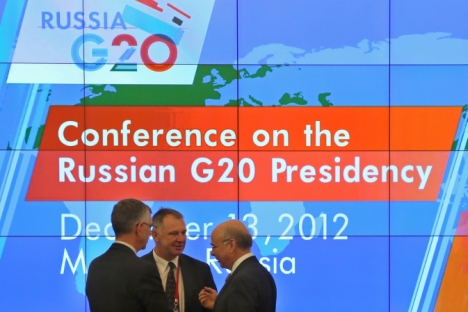 Participants of a press briefing within the framework of the Conference on the Russian Presidency in G20 "Fostering Economic Growth and Sustainability" held on December, 13, 2012. Source: RIA Novosti / Ekaterina Chesnokova

Leaders of the Group of 20 said Saturday that global economic growth remains weak despite government measures, but they agreed to avoid currency wars intended to stimulate the economy by devaluing their money.

A meeting of the group's finance ministers and central bankers was held in Moscow for the first time, due to Russia's current G20 presidency. The Manezh exhibition hall, a stone's throw away from the Kremlin, was the venue.

“We recognize that important risks remain and that global growth is still too weak, with unemployment remaining unacceptably high in many countries,” read a joint communique published on the G20's official site Saturday.

“We will refrain from competitive devaluation,” the statement said.

The commitment is in line with the position of Russian Finance Minister Anton Siluanov, who has said exchange rates should be set by the market because Central Bank interference could lead to imbalances, Rossiyskaya Gazeta reported Saturday.

G20 leaders also said they had agreed to establish a joint study group with the World Bank, International Monetary Fund and United Nations to stimulate the financing of long-term investment.

The G20 is also seeking to increase governments' control over the global financial system.

The G20 meeting in Moscow was seen as a milestone for Russia, which is nursing the idea of turning Moscow into a key financial centre despite purportedly poor corporate governance.

“A clear and enforced rule of law will be important for Russian financial markets to reach their full potential,” Lawrence Goodman, head of the Center for Financial Stability, a U.S.-based financial think tank, told the Moscow Times in an e-mail interview Friday.

“Russian participation in the G20 and inclusion in the BRIC category of nations helps deepen its local financial markets,” said Goodman, a former adviser to the U.S. treasury secretary.

“Although the clustering of Brazil, Russia, India and China is somewhat artificial,” he said, “the four nations maintain the potential to shape future growth outside the advanced economies.”