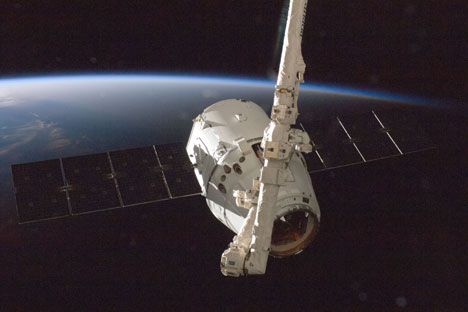 Russia has repeatedly called for stepping up cooperation with India in high-tech areas, saying it is willing to share with her its experience in the field of space disaster management. Source: AP.

Moscow and New Delhi already have a long record of ties in preventing disasters and emergency situations.

As a massive rescue and clean-up operation involving about 10,000 workers of the Russian Emergency Situations Ministry continues in the Urals following Friday’s meteorite strike in Chelyabinsk region, Russia has called for an urgent international cooperation to effectively meet natural threats from space.

Meteorite explosions and fireball showers like the one in Chelyabinsk may especially prove to be very dangerous in the regions where nuclear facilities are located. Several nuclear and chemical industry facilities are located in Chelyabinsk, including the Mayak fuel processing factory and nuclear waste storage, where a nuclear accident occurred in 1957, causing massive radioactive contamination.

“We already have people who have been harmed and injured as a result of the meteorite’s fall,” Russian Academy of Sciences member, Moscow State University World Politics Department dean Andrei Kokoshin said in an interview to the Itar-Tass, following the meteorite showers, which injured thousands of people and caused huge damage to buildings and property in Chelyabinsk city.

“Should a larger celestial body hits the Earth, the effects will be far more devastating. Particularly so, if that happens in a large city. And in certain cases, as many scientists have been warning, the fall of an asteroid would spell the end of humanity,” Kokoshin said.

Kokoshin, in particular emphasised on the meteorite disaster incident, saying this is the reason why the time is ripe for not only scientists to address this issue, but also for politicians and statesmen to join their forces in this work.

“There should be concerted efforts by the international community on the basis of decisions by the leading countries of the world having the appropriate scientific knowledge and technologies, he said, adding “Such technologies do exist in Russia, the United States, China, the European Union and, to a certain extent, in India.”

Kokoshin, a former secretary of the Russian Security Council, urged the foreign countries to consider this issue in the bilateral and multilateral format.

“It is high time to create a common international centre for monitoring and responding to natural threats from space. The UN may create a special committee within its structure to coordinate efforts by UN Security Council member-states and other UN countries in that field,” he said.

According to the Russian scientists, the Chelyabinsk meteor close miss should serve as a “wake-up call” for the international community to set up a system for monitoring meteors of similar size and provide advance warnings to the population in the regions likely to be affected. Reports suggested the meteor was a tiny asteroid that released 300 to 500 kilotonnes of energy when it exploded, which is roughly equivalent to 20 atomic bombs of the type dropped on Hiroshima and Nagashaki.

It only underlined the urgency of taking measures by the international community to avoid such risky natural calamities from the space. “Today we can spot about 10 percent of such objects as the Chelyabinsk meteor in the solar system. Ninety percent go undetected and some of them may crash into Earth any moment,” Dr Oleg Malkov of the Russian Science Academy Institute of Astronomy warned.

Following the meteor incident in Chelyabinsk region, Russia lost no time to commence move to coordinate international efforts not only in multilateral format, but also in bilateral format with India and within the framework of Russia-India-China (RIC) trilateral cooperation.

Russian Prime Minister Dmitry Medvedev has already entrusted Deputy Prime Minister Dmitry Rogozin with the responsibility of proposing ways to forecast and prevent disaster threats from space. Rogozin, who looks after Russian defence industry and space issues, is the co-chairman of the Indo-Russian Inter-Governmental Commission on Trade, Economic, Scientific-Technological and Cultural Cooperation. The deep interaction that he already has with his Indian counterparts will undoubtedly enable him to expand cooperation in the field of management of disasters from space.

Reiterating his call from 2011 for an “international initiative to create a system,” to prevent space threats, Rogozin said neither Russia nor the US can prevent objects from crashing into the Earth from space. “The essence of our idea consists of joining the intellectual and technological efforts of industrial nations,” he tweeted last Sunday.

Even before the Friday’s meteorite explosion in Urals, Russia has repeatedly called for stepping up cooperation with India in high-tech areas, saying it is willing to share with her its experience in the field of space disaster management.

India and Russia have a long record of ties in preventing disasters and emergency situations. In December 2010, they inked an intergovernmental agreement on interaction in case of natural and man-made disasters.

In June 2011, during the visit of the-then Union Home Minister P. Chidambaram at the invitation of former Russian Emergency Situations Minister Sergei Shoigu, Russia and India agreed to deepen disaster management cooperation between the two countries. Russia also offered technical assistance in setting up a disaster management centre in India similar to the one it has in Moscow.

Russia has a state-of-the-art crisis control centre using sophisticated technology and GLONASS, the Russian equivalent of GPS. It keeps real time record of each and every case of accidents and disasters in the country. The centre has highly mobile infrastructure that can airlift rescue and relief teams into any part of the country within hours.

India, which has set up a National Disaster Management Authority, is also in the process of creation of such crisis control centre and can effectively utilize and gain from the Russian experience. During Chidambaram’s visit, both sides discussed the Russian proposal to set up a joint commission to implement the December 2010 intergovernmental agreement on cooperation in dealing with natural disasters, including tsunami.

Most recently, taking a step further, the two countries signed a Memorandum of Understanding (MoU) during the visit of Russian President Vladimir Putin to New Delhi for regular annual India-Russia summit on December 24, 2012.

Success of the pilot project may provide insights for wider applicability of GLONASS signals in the future in areas such as disaster management, telephony and long-distance communications.

Russia, India and China have already been cooperating in disaster management within the framework of RIC and Moscow is likely to propose new measures with a view to further boost collaboration between the triangular alliance to ward off threats of natural disasters from space following the recent meteorite explosions in Chelyabinsk region, sources said.

The RIC Foreign Ministers at their meeting in Moscow last April, underlined the importance of cooperation in the field of disaster management and appreciated the outcome of the trilateral programme for exchange of information and expertise on the use of geo-spatial technologies in monitoring and forecasting flood and drought, organized in Hyderabad in May 2011.

They also welcomed the outcome of the 4th Russia-India-China Trilateral Expert Meeting on Disaster Management in St Petersburg in September 2011 and identified priorities for further cooperation in the trilateral format.