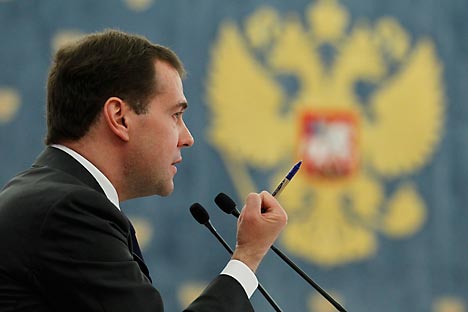 IMF said that Russia's economy could demonstrate a faster pace of growth over the next few years than the annual goal of 5 percent set by Prime Minister Medvedev. Source: Reuters

IMF’s Russia representative praised the government's efforts to keep the economy on a stable path, like tying federal spending to the price of oil.

The International Monetary Fund took an optimistic stance at Russia's prospects, saying that its economy could demonstrate a faster pace of growth over the next few years than the annual goal of 5 percent set by Prime Minister Dmitry Medvedev.

To attain those growth rates, the government should focus on the “three legs” of ensuring macroeconomic stability, developing the financial sector and improving investment climate, the IMF's representative in Russia, Odd Per Brekk, told a news conference.

“Standing on those three legs … the Russian economy could grow by as much as 6 percent annually over the medium term,” he said.

Brekk praised the government's efforts to keep the economy on a stable path, like tying federal spending to the price of oil and a shift toward inflation targeting by 2015 that will involve increasing the flexibility of the rouble exchange rate and reducing the Central Bank's currency interventions. Those measures, he said, “should provide policy anchors for economic stability that Russia has been missing.”

At the Federation Council, Central Bank Chairman Sergei Ignatyev voiced concerns Wednesday that the shift to the free rouble exchange rate might result in high volatility on the currency market. He told senators that the bank might continue to use some mechanisms to regulate the exchange rate after the shift to inflation targeting. But he added that those measures would not contradict the inflation targets.

Brekk cautioned that inflation would likely reach 6 percent this year and in 2014 if the Central Bank's policy remained unchanged but noted that policy changes promised to allow the bank to reach its inflation target.

The Central Bank expects inflation to reach 5 to 6 percent this year before slowing down to 4 to 5 percent in 2014.

Brekk also outlined other steps critical for attaining a stable economic growth, including developing the financial sector and improving conditions for doing business.

The IMF has welcomed Russia's 2012 accession to the World Trade Organization, which should make the investment climate more predictable, as well as the government's focus on selling off state assets.

But Brekk said much work lies ahead because to attract investment, the government should also strengthen the rights of property owners and minority shareholders, tackle corruption, reduce red tape and improve the rule of law.

Turning to the short term, Brekk said the IMF expects Russia's economy to grow by 3.75 percent this year, slightly above the Economic Development Ministry's forecast of 3.6 percent.

The government has been charged with ensuring annual economic growth of at least 5 percent over the next five years under a program revealed by Medvedev this month.

“Which [growth] scenario will materialize will depend on the government's economic policy choices,” he said.