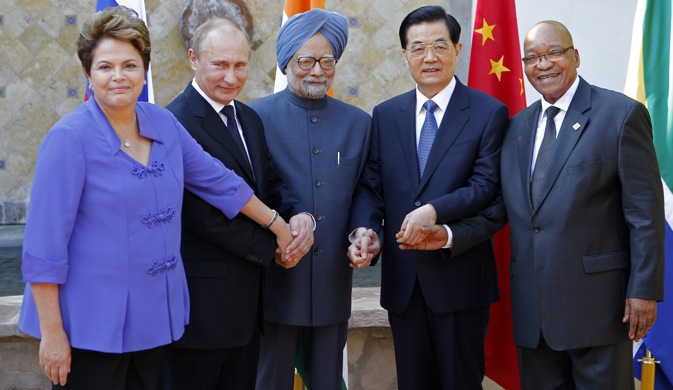 The BRICS countries have a remarkable opportunity to coordinate among themselves after the global economic meltdown is over because major economies would continue to be plagued by financial instability and insipid growth. Source: AP

All 5 BRICS members have pooled their intellectual capital and come up with a strategic agenda for forging closer links among themselves to consolidate and expand their roles in global affairs.

A new strategic agenda will be considered during the upcoming 5th Brazil, Russia, India, China, and South Africa (BRICS) summit in Durban, South Africa (March 26- 27, 2013). Its contours are so broad and vast that this four-continent outfit will inevitably take several summit meetings to implement it.

The BRICS officials have identified 13 specific areas to synergise BRICS economies. It must be stressed here that the political and technical feasibility of this 13-point programme is yet to be determined. Obviously the implementation of this programme will inevitably require further deliberations. However, it is for sure that these 13 points will be part of BRCS discussions at all levels or a long time to come.

The BRICS roadmap is that the member countries should coordinate their economic policies and diplomatic strategies not only to enhance their position as a grouping in the international economic and financial system, but also to be a stabilization factor for the world economy as a whole. The idea is that BRICS should increasingly harmonise and coordinate their policies with a view to sustaining their growth momentum and capacity to weather global turbulence so that this cooperation benefits not just the grouping but also for the global economy.

Though the BRICS countries have shown remarkable resilience to the global economic crisis, there is a source of potential downward pressure on growth in the BRICS because of weak growth and the spillover effects of policy responses in advanced economies.

Moreover, the credibility of the policy of reforms is crucial for the BRICS economies to make their growth processes more durable and development-oriented. Policy changes are needed by the member countries to address these challenges, domestic as well as external. Here are some of the specific ways to achieve this as suggested by a very recent official BRICS report:

China needs to take it as its priority tasks to transform the economic development pattern, expand domestic demand, and improve people’s well-being in advancing economic and social development.

Brazil, Russia, and South Africa need to bring in a much needed diversification in their current reliance on exports of natural resources like oil and other primary commodities. They need to have such industrial policies in place which improve the competitiveness of manufactures in order to make economic growth less vulnerable to adverse movements in commodity prices.

An important distinctive aspect among the BRICS economies lies in their respective levels of social and infrastructure development. Brazil, India, and South Africa are still laggards and need to catch up with the level of infrastructure and human capital achieved by Russia and China.

The development trajectory of BRICS economies in the next decade will heavily depend on the manner in which the following challenges are met, not necessarily in that order: high fiscal deficits in the post-economic crisis period, high global uncertainty leading to weak demand for exports, trade protectionism in the wake of the global financial crisis, intolerably high unemployment levels, poverty and inadequate public health and education facilities.

The BRICS countries have a remarkable opportunity to coordinate among themselves after the global economic meltdown is over because major economies would continue to be plagued by financial instability and insipid growth.

BRICS have acquired a key role in the world economy as producers of goods and services, receivers and exporters of capital and as huge potential consumer markets. Sample these facts: (i) their large population (BRICS accounts for more than 40 percent of world population), (ii) resurgent middle class, (iii) huge share of land (nearly 30 percent of global share), and (iv) natural resources.

The way BRICS economies have recovered from the global economic crisis only demonstrates how strong and robust their macroeconomic fundamental are, and also underlines the grouping’s growing significance in the new global order.

Income inequality in Brazil and Russia is reducing rapidly and thus leading to a growing and vibrant middle class and the total percentage of South Africans in the middle class is projected to increase at a rapid pace. Russia, India and Brazil are relatively more domestic demand-driven economies while China’s manufacturing success has boosted urban household spending.

A major plus for BRICS is that all five countries are abundant in terms of workforce availability. This is in stark contrast to the Western world where most of the countries are suffering from the bane of a declining population and a dwindling workforce.

The BRICS countries have clocked steady growth by taking advantage of their abundant population and resources. But the trends in GDP indicate that the individual countries have different paces and levels of economic growth.

Here are the country-specific examples. China has been maintaining its long-term high economic growth trajectory, while India and Russia have been moving towards sustained high growth. In contrast, Brazil and South Africa have shown sustainable but lower economic growth rates since the early 2000s, but have been making rapid strides along the path from crisis to stability and growth.