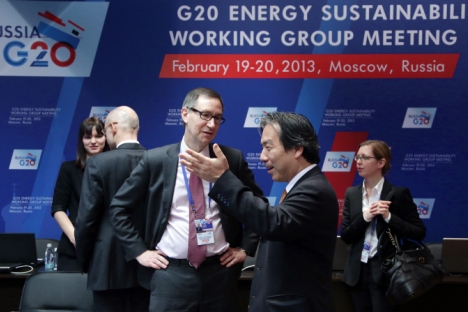 One of the least understood aspects of Russia's economic policy is how badly the government managed the global financial crisis.

Russia's policy choice was not inevitable. During the financial crash in 1998, the government had many fewer options but acted much more effectively. That crash functioned as a catharsis, allowing the economy to expand 7 percent a year for a full decade, the highest growth Russia has ever recorded.

The secret lay in the government's cleansing of the economy by cutting harmful subsidies, which had kept inefficient enterprises afloat. The economy opened up for competition from new entrepreneurs. The main cause of the 1998 crisis was a persistently large budget deficit that mainly went toward the financing of huge enterprise subsidies, which the World Bank has assessed at 16 percent of GDP. Without foreign financing, the  government had no choice but to eliminate these benefits to the old elites. From 1997 to 2000, the country slashed public expenditures by no less than 14 percent of GDP.

As a result, accidental owners of privatized enterprises, usually old state managers, realized that their enterprises could become worthless. Many sold fast to budding young entrepreneurs, who turned the old enterprises around. The leveling of the playing field allowed many new entrepreneurs to enter the market. The number of enterprises rose soundly until 2009 — and with them, competition.

In 2008, by contrast, the government had ample funds, but it used the money so inefficiently that in all likelihood it would have been better not to spend it.

Two excellent young Russian economists, Yulia Davydova of the London School of Economics and Vladimir Sokolov of the Higher School of Economics, wrote an as-yet unpublished study of the corporate bailouts in 2009. They did a proper econometric study of 481 strategic state-owned firms, of which 79 received state support. The government must be lauded for making all the underlying statistics public.

The outcome of the government's assistance could hardly have been worse.

Davydova and Sokolov's first conclusion is that enterprises that had low profitability and quickly increased their debts before the crisis were likelier to receive government assistance during the crisis. In other words, the government poured money into the companies that had been the worst managed before the crisis.  An explanation of this selection, the study says, is "that firms chosen by the government for bailout were significantly larger than no-recipients within the same industry." In 1998, such state enterprises were forced into bankruptcy and their assets were taken over by more capable private entrepreneurs.

The authors' second conclusion is that "average productivity … declined among the treated firms, while it grew among the control firms in the post-bailout period." In short, "firms that received government assistance performed worse than matched firms that did not receive such assistance." Not only did the government spend money on the worst enterprises, but its assistance also further aggravated their performance.

This study deals only with state corporations, but the government pursued the same policy toward the private sector. The government channeled $50 billion in bailout money through a state bank, VEB. In total, $100 billion from the National Reserve Fund was spent from February 2009 until May 2010. The biggest support, however, was $200 billion in international currency reserves that was expended on a gradual devaluation from November 2008 until January 2009, which effectively allowed all the wealthy and well-connected to "speculate" against the state to their benefit.

In similar fashion, as the successful crisis management of 1998 granted Russia a decade of growth, the flawed bailout of 2009 may lead to a decade of low growth. After many years of persistent growth, the number of enterprises started declining in 2010, and this decline seems likely to continue. So far, the improvements in the business environment have been marginal, and increasingly businesspeople talk about glass ceilings blocking their advancement.

A dominant current feature of the economy is that state corporations with access to state financing are purchasing large private companies. Rosneft's purchase of TNK-BP stands out as the sign of this time: a poorly managed state corporation buying one of the world's most efficient and profitable large oil companies at great cost and harm to the nation's finances.

Deputy Prime Minister Arkady Dvorkovich has said that half of GDP now originates in the public sector. Just look around. Wherever you look, you see the bright signs of big state corporations like Gazprom, Rosneft, Sberbank and VTB. Meanwhile, large billionaire-controlled companies are buying smaller private firms. The concentration of ownership is noticeable, as is the dwindling competition.

In September 2008, Prime Minister Vladimir Putin spoke of Russia as a safe haven in the global financial crisis. He missed Russia's dependence on oil prices and the corporations' large credits from foreign banks, since the dominant state banks had indulged in activities other than financing large domestic companies. Even so, Russia should have done better economically, given that the oil price has been persistently high since the crisis. The halving of the growth rate to 3 to 4 percent after the crisis is a stark contrast to China and India.

Admittedly, Russia's economic growth looks good in comparison with that of the neighboring eurozone, and its macroeconomic policy remains stellar. But with a deteriorating economic structure and reforms kept to a minimum, economic growth is not likely to rise but to gradually decline, even if oil prices stay as high as at present.

Russia has two great assets that now drive growth: splendid human capital, which remains underutilized, and increasing international integration, not least because of its recent accession to the World Trade Organization. But if private corporations do not find room to establish themselves, develop and invest, growth will remain impeded.

Anders Aslund is a senior fellow at the Peterson Institute for International Economics in Washington.