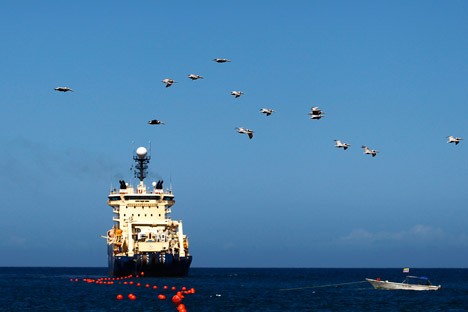 BRICS Cable is an important strategic project for immense social and economic benefits to all member countries. Source: Reuters

Once completed the 34,000-km-long BRICS Cable will be the third longest undersea telecommunications cable in the world.

The quotient of success or failure of an international grouping is determined by the level of connectivity among members of the grouping and what steps the body has taken to bridge the gaps. On that count, BRICS has already cemented its place in the comity of nations.

A super ambitious BRICS project, already on, is a testimony to the grouping’s high success quotient. The project is called BRICS Cable.

The project, scheduled to be completed by next year, is going to cost $ 1.5 billion, to be shared by the five member countries depending upon the work involved in each country. The grandiose nature of the project can be ascertained from the fact that once completed the 34,000-km-long BRICS Cable, stretching from Vladivostok in Russia to Miami in the US, will be the third longest undersea telecommunications cable in the world.

The grouping’s leaders have acknowledged the strategic value of a new cable to directly link the 5 economies and at the 4th BRICS summit held in New Delhi in March 2012, the project was included in the joint declaration as a project of strategic importance. All the BRICS governments have already been consulted on the project and have given their in-principle support. Feasibility studies on the project began in March 2011 and were completed in less than a year. Besides, French-owned telecommunications construction firm Alcatel has finished the route survey.

How BRICS Cable Will Be a Game Changer

The BRICS countries – Brazil, Russia, India, China and South Africa – currently use hubs in Europe and the US to connect to one another. This inevitably means higher costs. More importantly, it leaves the BRICS countries in the hands of the European and American hubs managers and enhances the risks of data interception and theft.

The more networks you travel through, the higher are the chances of your data getting stolen or intercepted. For example, a call from China to Brazil may have to be routed through the US in two hops, or four or five different hops via Suez. The BRICS Cable project will end this as it will link the countries without having to route traffic through multiple hubs.

These problems will become a thing of the past once the project becomes operational. It adds high strategic value to the entire BRICS grouping and sends a strong signal to the world that this grouping means business and has the technology, the resources, and more importantly the political will, to reduce dependence on the developed world.

Moreover, through the BRICS cable, the original BRIC members of the grouping will be able to establish a two-way avenue with 21 African countries currently using those systems. This in turn will enhance the scope of trade and economic ties between BRICS and Africa.

In the process, the cable project will also inevitably lead to a tremendous rise in the stature of South Africa within Africa as South Africa would emerge a gateway between BRICS and the African continent.

No wonder then that South Africa is leading from the front in trying to see that the project is completed in soonest possible time. At a separate BRICS business breakfast hosted by South Africa, South Africa’s President, Jacob Zuma, encouraged the attendees to support the project and play their role in fast tracking its execution.

The South African promoters – Imphandze Subtel Services (Pty) Ltd, a subsidiary of Imphandze Investments, in association with i3 Africa (Pty) Ltd– are in possession of the requisite telecommunications licences in South Africa to land, operate and maintain the undersea cable in South Africa. Following the outcome of the BRICS Summit in India, they are now in the process of formally inviting telecommunications operators and other potential investors in the BRICS countries and the USA to participate in the project.