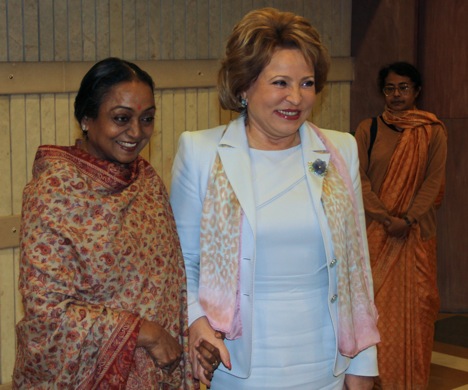 Matviyenko said India would remain a reliable and true friend of Russia, noting that the bilateral relations had stood the test of time. Source: Alexandr Nevara/RIA Novosti

The exchange of the delegations between the parliaments of the two countries has in the recent past years increased following a long pause in the inter-parliamentary collaboration.

The chairperson of the Federation Council, the upper house of Russian parliament, Valentina Matviyenko, paid a three-day visit to New Delhi last week to further strengthen the inter-parliamentary cooperation between India and Russia. The exchange of the delegations between the parliaments of the two countries has in the recent past years increased following a long pause in the inter-parliamentary collaboration.

During her visit, Matviyenko held talks with a number of political leaders, among them, President Pranab Mukherjee, Lok Sabha Speaker Meira Kumar and Vice President and Rajya Sabha Chairman Hamid Ansari, on wide-ranging bilateral and international issues, including terrorism, UN Security Council reforms, BRICS, G20 and other issues of mutual interests for both the countries.

Matviyenko’s talks in New Delhi aimed to give a powerful thrust to the India-Russia inter-parliamentary cooperation at the par with the high level of political understanding and special privileged bilateral strategic partnership. However, during the talks the interlocutors from both sides, unmistakably mentioned that in spite of increasing inter-parliamentary cooperation between India and Russia, in recent years, there was much desired to be done, in order to raise the level of bilateral parliamentary interaction commensurate with the high level of political ties between the two countries.

He said Russia was a key partner and friend of India for many decades, and that the India-Russia privileged strategic partnership was a unique and multi-dimensional relationship, characterised by stability and warmth.

"Russia remains a key priority for India's foreign policy. From Soviet assistance in India's early industrialisation and defence consolidation to a strong symbiotic relationship in joint design and development in strategic sectors, the India-Russia strategic partnership reflects our remarkable convergence of interests in bilateral spheres as well as on the global stage," Mukherjee said, calling on the sides to make concerted efforts to take their two- way trade to $20 billion by 2015.

India must be Russia’s number one priority

In her turn, Matviyenko said India would remain a reliable and true friend of Russia, noting that the bilateral relations had stood the test of time. "Russia is happy over the growth in status and influence of India because our views and interests converge and we will together be able to better influence global events," said Matviyenko who is Russia’s most influential woman according to a recent survey by the radio station Ekho Moskvy.

The leader of the Russian parliamentary delegation was warmly welcomed by her counterpart, Lok Sabha Speaker, Meira Kumar who expressed her deep appreciation for Russia’s support for India’s candidacy as a permanent member in the UNSC. Kumar also noted the key role that India and Russia are playing in BRICS, G20 and various other international forums.

She also emphasized the need for India and Russia to work together against the scourge of terrorism. "Terrorism is a scourge which India and Russia have to address together," Kumar said, adding that the relationship between the two countries is unique and warm based on rock-solid foundations, as they have “commonality of views” on most of the global issues.

Moscow has for many years faced terrorism and separatism in North Caucasus, especially in war-ravaged Chechnya and it considers New Delhi, which has long been confronted with separatist violence in Indian Kashmir, as its strategic ally in south Asia.

Kumar, in particular, also pointed to the establishment of the India-Russia Parliamentary Friendship Group in Indian parliament and expressed the hope that the initiative would further consolidate interaction between the parliaments of the two countries. She also underlined the importance of the fact that the frequency of the exchange of visits of parliamentary delegations from the two countries should be increased.

“We have cooperation in several fields; there is friendship between our countries and very warm stable relationship. And all this is on a very solid foundation,” she said. “All the people of India have the same opinion – they all want to have a close relationship with Russia.”

Matviyenko, on her part, noted that relations between Russia and India have reached the level of privileged strategic partnership. She thanked Kumar for the warm hospitality and extended an invitation to her to visit Russia along with an Indian parliamentary delegation, stressing that both India and Russia are old friends and both can work together for a better world order.

As the upper houses of both Indian and Russian parliaments are represented by states and regions, Matviyenko during a meeting with Rajya Sabha Chairman proposed the creation of a special format of regional cooperation between the states and regions of the two countries.

Speaking to reporters after her talks with the Rajya Sabha Chairman, Matviyenko reiterated that parliamentary side of the Indo-Russian relations have been lagging behind. “The last meeting between the chairs of the houses of the two countries was 14 years ago. Inter-parliamentary relations have been lagging behind the presidential and government-level relations. My visit is here to activate this relationship,” she said.

“Regular parliamentary level bilateral interaction has served as an important dimension of the Indo-Russian political ties, based on continuity, trust and mutual understanding,” Moscow-based Russian analysts said, commenting on the fruitful results of the visit of chairperson of the Russian Federation Council.“In this regard, Matviyenko’s visit to India is a further step forward in the tradition of exchanges between the parliaments of the two countries,” they noted, mentioning the long-standing tradition of inter-parliamentary cooperation.

It may be recalled that after the collapse of the Soviet Union in 1991, there have been a series of exchanges of visits. An agreement on the establishment of India-Russia Inter-Parliamentary Commission, headed by the Speakers of the two countries, was also signed during the visit of the then Lok Sabha Speaker G.M.C. Balayogi in November 1998.

During his recent trip to New Delhi, Matviyenko told journalists in New Delhi that BRICS countries (Brazil, Russia, India, China, South Africa) will soon set up a parliamentary forum in order to closely cooperate among themselves, including between Indian and Russian parliamentarians.

“Our colleagues from Brazil had proposed creating parliamentary dimension of the BRICS format,” she said, adding “It has been agreed and it will soon be signed.”