Russia’s chances on the Indian arms market. Part one 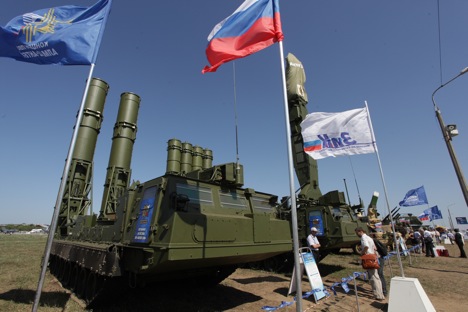 The Russian corporation JSC Concern Almaz-Antey, one of the main suppliers of air defence products to Russia’s national Armed Forces, has traditionally viewed the Indian market as a priority.

Several weeks have already passed since the closing of the Aero India 2013 international aerospace show in Bangalore in the Indian state of Karnataka. Much has been written about what happened at the seminar, but a lot remains to be said. This includes, above all, the fierce competition among the leading countries and their defence industries for India’s arms market, one of the world’s richest.

The expositions of the Israeli company Rafale and the Russian corporation JSC Concern Almaz-Antey sat almost side by side at the Aero India 2013 show at the Yelahanka air base.

The Israelis exhibited their famous Iron Dome, David’s Sling, Spyder SR/MR, and some other systems, intended primarily to intercept non-guided Qassam and Grad missiles launched by Palestinian militants from the Gaza Strip towards Israeli cities.

While the Almaz-Antey didn’t have any actual equipment specimens to demonstrate, scale models of its short-, medium-, and long-range air defence systems were on hand, including the Buk-M2E, the Tor-M2E, the Tor-2KM and the Antey-2500.

I asked Yuri Bely, CEO of the Tikhomirov Instrument Engineering Research Institute, which is part of Almaz-Antey, about the prospects for supplying Buk-M2E air defence systems to the Indian market, and also about their Israeli competitors.

“You should ask the Indian side about that,” Bely said. “I saw the Akash complex that they are demonstrating here. It’s a copy of our Kub, the predecessor of the Buk. Today’s Buk-M2E, complete with an electronic scanner and multi-role firing capabilities, is not even the next generation – it’s three or four generations ahead of it. There is competition from Israel, of course, but there is also competition from the Americans. Although strictly speaking, our system is short range, it spans the medium range and approaches the long range. I think we have a shot here. We are working on extending the firing range to 70km and the scanning range to 150km. So those who want solid protection for their airspace can count on us”.

The head of Almaz-Antey’s delegation Sergei Maksimenko was more forthcoming with his answers.

“Our company has traditionally viewed the Indian market as a priority,” he said. “Russia and India share strong political ties; we have strong trade and economic cooperation and a strategic partnership. Plus, our Indian customers have a high creditworthiness – all of which makes New Delhi one of our priority partners. Our company is one of the main suppliers of air defence products to Russia’s national Armed Forces, so we are interested in establishing mutually beneficial cooperation agreements with partner countries, including India.”

Maksimenko pointed out that his company was conducting a very flexible and well-balanced policy of promoting its products in the Indian market. “We are happy to offer customers in India our completed products: the Antey-2500 long-range systems, the Buk-M2E medium-range systems, the Tor-M2E short-range systems, and radar stations for detection and guidance, as well as for air traffic control. Armies, navies and air forces are all very interested in these products. This is one area we are working on with Rosoboronexport (the Russian state agency for arms exports) and Rostec, with support from the Federal Service for Military and Technical Cooperation.

We adapt our products to unique Indian market requirements by fitting them for Indian-made chassis, including stand-alone, wheeled and trailer versions. We have already found several partners in this area, and we are discussing specific implementation programmes. We are studying the market for Indian manufacturers to see how their products can be integrated into our equipment. This is to ensure that we will be in a position, alongside our Indian partners, to offer our newly adapted products to the country’s Ministry of Defence when the Indian side makes the final decision to purchase weapons from domestic manufacturers. One of the things we did ahead of the exhibition was to visit a number of Indian industrial companies. These companies showed us their capabilities. We already have a number of specific ideas for how to install our equipment, including modular pieces, on those systems.”

“As far as Israeli manufacturers are concerned, they, or course, are strong competitors in the air defence segment,” Maksimenko said. “We would like to familiarise ourselves with their products and see what characteristics they have been able to achieve. It acts as a kind of motivation for us to actively improve our own products, which in terms of the key criteria of mobility, survivability and target zones are no worse than those of our rivals; in fact, I am certain that they even outperform them. We are always ready to prove our worth in a tender”.

To be fair, India has yet to announce a tender for missile/air defence systems. Russia has systems that New Delhi used to buy back in the Soviet times. I asked Maksimenko how their modernisation programme was going.

“Under Russian law, our company has the power to sign various international documents related to after-sale service. For example, we signed a contract with an Indian company at the DefExpo exhibition last year on the extension of the service life of our missile systems. That contract is being successfully carried out right now. We supplied the materiel ahead of time, sent our specialists there, and we are conducting after-sale maintenance together with our Indian partners. We have several other projects in the pipeline. I believe that in the immediate future we will make end users happy by getting the contract signed.”

Does this include the Shilka and the Tunguska, mentioned by the Federal Service for Military and Technical Cooperation Director Aleksandr Fomin at his press conference?

“Yes, those systems are used here. We have packages of specific proposals related to improvements of after-sale maintenance and of characteristics of this equipment. We are discussing those matters with our partners. We stand a chance. And I would like to point out that no one except the manufacturers of this equipment can offer more technically proven, better calculated, and optimally balanced solutions from the economic point of view. Our company services our equipment itself.

For this, we have all the authority, and we have the support from the federal government. We don’t need anybody to help with that”.

“I would like to point out that India is one of the largest arms importers in the world,” Maksimenko said. “We have political interaction. One of the country’s leaders said at the opening of the Aero-India 2013 show that the focus of military and technical cooperation would be shifting towards purchasing equipment from India’s national manufacturers. I understand that this requires time. It’s impossible to implement this immediately, even though Indian companies do make modern equipment. But as long as such a policy has been announced, we have to adapt to it, and we are doing a lot – we are having many meetings, negotiations and company visits. We are trying to identify points of contact, and to understand how we can adapt our products in order to be able to offer Almaz-Antey’s products to the Indian Ministry of Defence together with our Indian partners.

Here’s hoping that Almaz-Antey will succeed in that, especially as Deputy General Director of Rosoboronexport Viktor Komardin told the author that Russia was planning to take part in a tender to supply air defence systems to India. “We are offering India’s Armed Forces our S-300VM (Antey-2500) long-range air defence missile system,” he said.