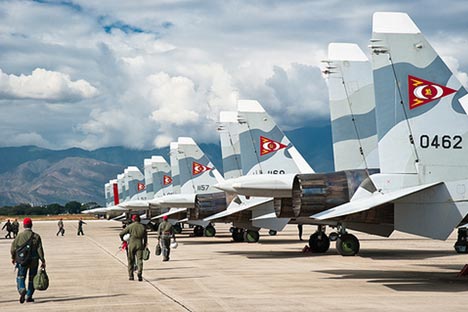 Rosoboronexport Deputy General Director Viktor Komardin called speculation that India has been increasingly turning away from Russian arms. The portfolio of Indian orders stood at $7 bn at the end of December of last year.

A French multi-role fighter plane Rafale, the winner of a $10-bn tender for 126 fighters announced by India several years ago, was stationed not far from the pavilion of the Israeli firm Rafael. The Rafale’s rivals included Sweden’s Gripen (SAAB), the American-made F/A-18 (Boeing) and F-16 (Lockheed Martin), the European Eurofighter/Typhoon, and Russia’s MiG-35.

Russia’s chances on the Indian arms market. Part one

The multi-role MiG-35 was a star of the Aero India 2009 show held at the height of the tender proceedings. It made flights over the Yelahanka air base several times a day. Our pilots gave rides to Indian marshals, politicians, and even to a local celebrity beauty – a female pilot instructor at a military academy.

Our MiG didn’t manage to win the 126-aircraft tender for various reasons. The Rafale has become the champion, although its tactical, technical, and combat specifications were not much better than those of our fighter, or any other tender contestant for that matter.

A simulator of the MiG-29K aircraft carrier-based fighter and its designer Vladimir Ivanov were in very high demand at Aero India 2013.

However, it was the French Rafale rather than the Russian MiG-35 that was the star of the show in Bangalore. Innumerable visitors lined up for a photo opportunity with it, and Indian specialists had long conversations with its pilots.

Until, that is, five Russian Knights piloting the Sukhoi-27s arrived at Yelahanka, lighting up the skies over Bangalore with their aerobatics.

However, according to Rosoboronexport specialists, India has yet to sign a contract for the delivery of the Rafale, although under the terms and conditions of the tender, the Indian Air Force was supposed to receive several French-made fighters by the end of 2012.

The reason is simple. Winning a tender is one thing, and fulfilling its terms and conditions thoroughly and in good faith is quite another. Delays have occurred with the latter part. First of all, the French must grant the Indians a license to manufacture their planes locally. There were some difficulties with transferring the license. Secondly, the parties must agree on a final price of the deal and spell it out in the contract. Difficulties have emerged there too. It turns out Paris is not happy with the $10-bn price for the whole deal; the French believe the contract’s value is much higher. Specialists from Dassault Aviation, the holder of the patent for the plane, have proposed valuing each of its components – engines, radar and avionics, antenna, missiles, etc. – separately. Several companies took part in the development of the plane, and many firms should be paid rather than only one. Combined expenses related to the plane’s purchase, lifetime maintenance, upgrades, spare parts supplies, and training of crews and servicing personnel put the sum total at far above the nominal $10-bn price tag.

French President Francois Hollande even came to New Delhi on a state visit immediately after the wrap-up of the Aero India 2013 show in Bangalore to give a boost to Dassault Aviation’s bid. He was welcomed with all the appropriate protocol, including laying wreaths at India’s main landmarks. The outcome of his visit and the decision on Rafale, the tender winner, are not yet known though.

The winner of a tender to supply India with 15 heavy-duty helicopters is reportedly also in limbo. The CH-47F Chinook took part in the tender alongside our own Mi-26T2; according to the local media, the American won.

“No official information has been announced yet”, Rosoboronexport Deputy General Director Viktor Komardin told us. “But in terms of comparison, the carrying capacity of the Mi-26T2 is 70%  higher than the CH-47F Chinook’s, while the sheer volume of the Russian helicopter’s cargo compartment is comparable to that of the С-130 Hercules military cargo plane”.

Komardin recalled that two years ago it was the Russian chopper that evacuated the American one on an external suspension from a battlefield in Afghanistan, not the other way around. In addition, the Mi-26T2 is capable of handling transportation, troop landing, rescue, and special tasks all during the same flight. It can also be successfully used as a fuel tanker, an extremely important feature given the rough and inaccessible terrain in some of India’s regions. In terms of avionics, something the Americans have always been strong at, both models are nearly identical. The Mi-26T2 can carry 82 airborne troops in full gear in its cargo compartment compared to the CH-47F’s only 55. Our machine can fit 150%more wounded on stretchers. “So let’s not get ahead of ourselves and wait for an official announcement of the tender results”, Komardin said

Komardin called speculation that India has been increasingly turning away from Russian arms, if four tenders lost in a row are any indication, a myth and utter nonsense. The portfolio of Indian orders stood at $7 bn at the end of December of last year. We supply at least $3 bn worth of arms and military equipment to New Delhi annually. In 2012, Rosoboronexport signed more than $3.5-bn worth of contracts with India, more than half of that in the area of aviation. The largest contracts involve supplies of the Mi-17V-5 helicopters, engines and onboard equipment for the Sukhoi-30MKI aircraft, and a batch of technical gear for the Sukhoi-30MKI. This contract for 42 machines was signed during President Vladimir Putin’s visit to New Delhi last December.

Even leaving aside the fifth-generation fighter aircraft we are developing together with the Indians and whose mock-up was exhibited at the pavilion of the HAL (Hindustan Aeronautics Ltd) corporation, keep in mind that negotiations on upgrading the previously supplied Sukhoi-30MKIs are underway. A conceptual and engineering design for the upgrade has already been approved, and the signing of a contract on experimental design work is expected by the end of this year. According to Yuri Bely, general director of the Tikhomirov NIIP, the upgrades will involve extending the range of the radar, enhancing the APAR’s resolution, and adapting the radar to accommodate new weapons that are to be deployed on the plane. These might include the BrahMos missile, which experts believe the Indians are planning to put in the air and launch from a plane as soon as this year.

To be fair, tenders are not always won in an open competition. A lot of politics is often involved. Sometimes tender terms and conditions can even be formulated to suit a particular bidder. The Indian government occasionally purchases military equipment without any tenders. For example, Boeing recently sold it the С-17 Globemaster military cargo planes intended for long-distance transportation of troops and materiel – from the American continent to Europe or to the Persian Gulf. It’s unclear where exactly the Indians are going to take their troops though. They have no overseas military bases, nor are they engaged in combat far removed from their national borders… Only one explanation is possible: Big politics. Kind of like our own purchases of the Mistrals.