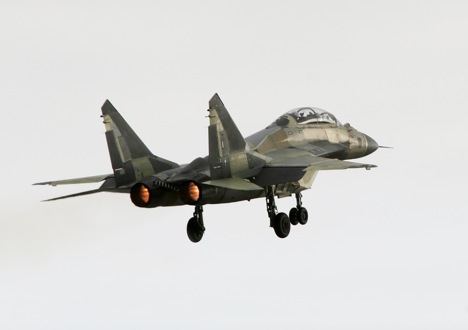 The Russian MiG-29K/KUB pilot training system is designed for pilots to train on the ground in safer and more comfortable conditions that are nevertheless very close to those of a real flight.

The Russian MiG-29K/KUB pilot training system for the carrier-based multirole fighters was one of the more unique exhibits at the Aero India 2013 air show. It is unique because of its 3D capabilities. You put on special glasses, just like at the cinema, sit at the control board and watch the computer display turn into a flight deck with its lights in front of your cockpit, hear the rocking waves and pull the joystick…

“The simulator that we are demonstrating at Aero India 2013 enables pilots to see just how the plane is operated, as if it were real. This is due to the stereoscopic effect,” says Vladimir Ivanov, head of the Centre for mathematical and test bed simulation of flight dynamics at MiG. “In real life we use both eyes, so we can measure the distance to an object and the speed at which we are travelling towards it. The data are processed in the human brain, and the pilot makes decisions. This is a crucial thing. The better he perceives the world when hand-flying, the easier it is to handle the plane and keep it safe.

The training system is designed for pilots to train on the ground in safer and more comfortable conditions that are nevertheless very close to those of a real flight. We attempted to build a visualisation system that would be very close to the real world. For such complicated processes as aerial refuelling, when you are at arm’s length from the object, the pilot must be able to identify the distance between his plane and the refuelling aircraft and the best speed to fly at. We have created the image of a receptacle, and we have a real flying boom system in the cockpit. The pilot is supposed to insert the real boom into the virtual object. The pilot sees this virtual receptacle catch the real boom and manages the process. It happens as if it were a real life refuelling process.”

“It may sound as if I’m boasting, but there’s a very experienced pilot whom I respect. So when he used the simulator, he told me that he was making the same mistake using the training system as in real life. I guess this is an interesting quality evaluation of our product.”

This is just one of many examples. The simulator has lots of tasks for pilots to complete, including taking off from an air carrier. The ski-jump ramp is a high structure located on the edge of the deck, so the pilot often feels that he is heading into a wall. To help him get accustomed to what happens on a real deck is a good thing. The same holds for landing, where any reliable information is helpful. This is a short process, and the stereo effect may not be very important. The deck is huge, but it is a tiny matchbox in the ocean. When he approaches the ship, the pilot starts to get a grasp of the size of the vessel and the deck.

We supply these systems to the Indian armed forces. They will have certain options there, but I’m a technician, not a businessman, and I don’t know the details of the contract. The pilots who come here say they love it, but what happens next has nothing to do with me. “The Ministry of Defence is familiar with this equipment, but I don’t know what sort of decisions they make there,” Ivanov says. “But we prepared the simulator for the Admiral Gorshkov rather than INS Vikramaditya, as you can see from the software,” he adds.

So we won’t be needing the NITKA naval aviation training facility in Ukraine?

“I wouldn’t be so sure. There are surely many different ways of training deck-based aircraft pilots, and there is a need for NITKA. However, it is one thing to perform a few takeoffs and landings using the NITKA system, and a totally different thing to have hundreds of them on our machine. NITKA is expensive and is not entirely safe for unprepared pilots.”

The Russian Knights aerobatic demonstration team showcased their skills during the final two days of the show in Yelahanka, and the crowd cheered for the five ace pilots – lieutenant-colonel Andrei Alekseyev (team leader), lieutenants-colonel Oleg Erofeyev, Aleksandr Bogdan, Sergei Shcheglov and major Denis Plaksin, who showcased the beauty and grace of the art of piloting.