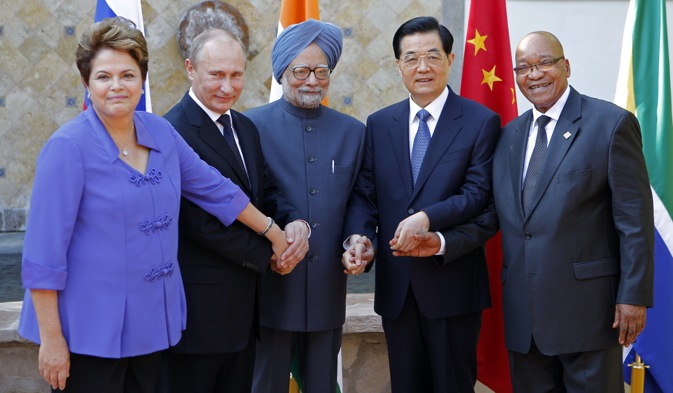 The intra-group flow of tourists will be a significant gain for economic development of the members.

While the BRICS summit takes place in South Africa late this month, one of the major items that has emerged in media, and will likely receive focus in the summit, is the issue of tourism.

The BRICS countries possess enormous potential for tourism; with coordination between them and provisions of better infrastructure and communication, tourism can be a major revenue earner. The intra-group flow of tourists will itself, as these countries comprise about 40 percent of world population, be a significant gain for economic development of the members. South Africa has already geared its mechanisms to highlight its tourism potential, and its policy makers have focused, besides other things, on this particular item of multilateral cooperation.

South Africa is currently pursuing the idea to establish T-5 (Tourism-5), which will be a premier body of the 5 BRICS members to coordinate on the issue of tourism. This T-5 idea is based upon the pattern of T-20, for which South Africa played a key role. The aim of T-20 is to “promote the value of tourism as a driver of job creation, economic growth and development within the G20 process and advocate for policies which are supportive of tourism growth.” All the BRICS members are part of the G-20, another powerful international body with significant impact on global economic decision making process. The formation of T-5 may help coordinate policies on tourism between the five countries. Reports suggest that the South African revenue has substantially increased in recent months due to inflow of tourists from the other four members of the BRICS. While from Brazil the tourists within the first nine months of 2012 increased by 51.7 per cent, the numbers in case of China, Russia and India are 62.8, 16.8 and 34.6 per cent respectively.

It is known that despite huge potential of tourism, the BRICS members have underutilised this potential. All these countries, particularly the first four, are huge in geography, and with rich flora and fauna, and also cultural and historical sites, but they are so far not been able to attract large number of tourists to match their potential.

While participating in a road show last week, the Premier of KwaZulu-Natal province, Zweli Mkhize and South African Minister of International Relations and Cooperation, Maite Nkoane-Mashabane, harped on this tourism potential of the country, and expressed hope that the forthcoming summit at Durban in this province will prove propitious on many accounts, including in the sector of tourism. The programme called Public Awareness is launched to highlight tourist potential of the country. South Africa is already investing a lot of diplomatic energy to capitalize the forthcoming summit. Mkhize argued, “In essence, BRICS Summit serves as a platform on which synergies between the economy of KwaZulu-Natal and economies of member nations will be strengthened. We want to promote KwaZulu-Natal as a destination for foreign direct investment.” The chief of the South African Chamber of Commerce and Industry, Neren Rau also argued in the same spirit as that of Mkhize. According to him, “The BRIC nations hold substantial potential for encouraging tourism to South Africa, given that our conventional tourism markets were substantially impacted by the global economic crisis.” Rau agreed that the country has to surpass many hurdles before being a tourist hub. In his words, “If tourism growth is to be sustained, it must be supported by strong redress of the inhibitors to tourism growth in South Africa, such as perceptions of rampant crime and widespread violent protest activity, as well as insufficient promotion of the facilities that South Africa has to offer.”

One of the major advantages in the transformation of South Africa as a tourist hub is its crucial location between South America and Asia. Usually the travelers from South America take the route through the Middle East while traveling to Asia. With improved airport facilities and flight services South Africa can play a vital role in boosting tourism. In this particular venture, the BRIC can play a dynamic role in building airport facilities and also launching more flights from South Africa to the BRIC countries. The CEO of the Southern Africa Tourism Services Association, Michael Tatalias pointed out that “Where air links open up, business travellers follow, deals are made, and cargo and sea trade follows.” The Tourism Minister of South Africa, Marthinus van Schalkwyk observed, “We are confident of continuing our exciting growth in a market set to become one of the world’s most important tourism markets in the future,” The transformation of South Africa as a communication hub will facilitate travel between the members of the BRICS not only for tourist purposes but also for trade purposes. In order to promote tourism the South African government is also mulling over the idea of easing visa restrictions for the travelers.

The forthcoming summit will be crucial on many accounts. Multilateral trade and investment will be a major item of deliberation. The members will also turn their attention on some of the vexed issues in the Middle East and in other parts of the world. Tourism will also be another item on the agenda. While the summit will certainly vault South Africa further on the international scene, it will also provide the needed scope to the members to strengthen the grouping and enhance their cooperation in political and economic spheres, and also increase their clout on the international scene.