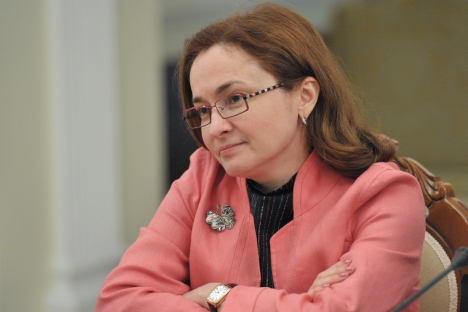 Vladimir Putin did not address Elvira Nabiullina’s lack of banking and finance experience but implied he had faith in a loyal technocrat who served as economics minister from 2007 to 2012.

President Vladimir Putin’s nomination of his economic aide and former Economics Minister Elvira Nabiullina as a candidate to head Russia’s Central Bank evoked mixed reaction from experts, while the markets seemed to be unruffled by the news.

Putin proposed Nabiullina’s candidacy on Tuesday evening at a meeting with incumbent Central Bank chief Sergei Ignatyev who has served three successive terms and will step down in June.

Putin did not address Nabiullina’s lack of banking and finance experience but implied he had faith in a loyal technocrat who served as economics minister from 2007 to 2012.

Nabiullina, part of the Kremlin team, is seen as a compromise figure in the struggle between the Central Bank’s efforts to conduct tight monetary policy to keep inflation under control and the government’s calls for monetary easing to spur the sluggish Russian economy, which demonstrated the weakest growth last year for the entire period of Putin’s reign, VTB bank head Andrei Kostin said in televised comments.

Some bankers and financiers praised Nabiullina’s appointment, which has yet to be approved by Russia’s parliament.

Kostin, who has long criticized the Central Bank for its tight monetary policy which he claims stifle the Russian economy by imposing high interest rates, said Nabiullina’s appointment would make these policies “more flexible” because the bank’s current monetary stance “was not adequate.”

Kostin also said Nabiullina’s appointment would also be followed by changes in appointments in the Central Bank’s leadership.

The Central Bank of Russia has kept its key refinancing rate at 8.25 percent since September 2012, saying the rate reflected a balance between inflationary risks and economic growth.

Ulyukayev has repeatedly claimed easing monetary policy by lowering interest rates would be counterproductive and would fail to stimulate economic growth, and could create imbalances and an accumulation of new risks in various segments of the economy.

“The previous [Central Bank’s] management was responsible only for the rouble exchange rate and inflation… without bothering about economic growth. From this viewpoint, Nabiullina has the experience of heading the Economics Ministry, which deals with the issues of economic growth,” he said.

He said the Central Bank was likely to ease monetary policy to some extent under Nabiullina because “the Central Bank’s interest rate policy has lost touch with economiс realities … as Russia is seen to move towards a considerable slowdown in economic growth.”

Others see Nabiullina's candidacy as a disaster in the making. Mikhail Delyagin, head of the Moscow-based Institute of Globalization Studies and well-known economist, said Nabiullina’s appointment would do nothing less than bring to an end to the period of economic stability under President Putin.

“This means not simply a continuation, but a reckless tightening of the disastrous policy of liberal fundamentalism, and the acceleration of Russia’s destruction, pushing us into a systemic crisis and, eventually, into turmoil,” Delyagin wrote on his personal website.

“One can only have sympathy for the Central Bank’s professionals,” he said.