Arctic Shelf to be tapped for growing energy demand 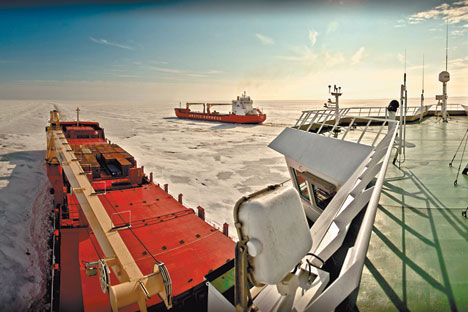 The borders of the Russian shelf in the Arctic Ocean have yet to be formalized. Source: Press Photo

With the danger if oil production in Russia falling by 20 percent by 2030, Moscow is turning its attention to the Arctic Ocean as its main source of future oil and gas.

The Arctic Development Strategy, signed by Russian President Vladimir Putin at the end of February, proposes that the oil and gas reserves of the Arctic shelf be considered part of Russia's reserve fund of hydrocarbon resources, intended to offset the expected drop in production after 2020.

Arctic reserves would be increased through an intensive study of the territory and state-funded exploration programs. The strategy also covers the development of several major fields, including deposits in the Timano-Pechorsk province and on the continental shelf of the Kara, Pechora, and Barents seas, as well as the Gydan and Yamal peninsulas.

State-owned raw materials companies and their partners have been promised a special tax regime for Arctic projects.

It isn’t without reason that Rosneft CEO Igor Sechin been criss-crossing the globe with the alacrity of a professional diplomat. In mid-February, he travelled to South Korea, China, and Japan, and early March saw him attend IHS CERAWeek in Houston. Investors around the world have been lured to Russia's Arctic shelf by the call of two magic numbers: the region's raw stock is estimated at over 35 billion barrels of oil equivalent and investments in their development could amount to $500 billion. That alone could fuel operations in the Russian Arctic. The development strategy is far more important to Sechin than to the government and ministerial civil servants who have spent the past four years drafting the document.

According to the strategy, Russia's Arctic zone includes such territories as Arkhangelsk, Novodvinsk, Severodvinsk, the Onezhsky, Primorsky, and Mezensky regions, and all the islands of the Arkhangelsk region. In addition, the zone covers the Chukotka and Murmansk oblasts, the northern half of Yakutia, the Nenets and Yamal-Nenets autonomous districts, the three regions of Karelia abutting the White Sea, the city of Vorkuta in the Komi Republic, Igarka, Norilsk, and the Taimyr region of Krasnoyarsk territory.

Rosneft and fellow state giant Gazprom own 80 percent of the offshore fields that have long-term prospects. For a long time, both politicians and businessmen were wary of the Arctic. Eight years ago, for instance, the owner of Chelsea FC, Roman Abramovich, who at that time controlled Sibneft and governed Chukotka in the Arctic zone, seriously considered a resettlement programme to provide more habitable conditions for the local people. Although his administration did indeed bring about some improvements in the region— reindeer herders' tents were replaced by houses built with Canadian technology, while home brewing and alcoholism were tackled through the introduction of credit cards, Abramovich found no commercially viable projects on the mainland, which rendered any offshore ventures insane. This view was shared by most of Russia's oil and gas generals —reindeer will not get you very far, economically.

Since then, Sibneft has become part of Rosneft, and the shelf has turned into a big business project. True, not all the oil and gas majors believe in its commercial viability. In 2009, the self-same Rosneft, in partnership with BP, abandoned exploration under the Sakhalin-4 project after two test wells came up empty (the price of each was estimated at $100-150 million) — and that was an inexpensive way of getting out of a project. This year, Shell suspended upstream prospecting in the Chukchi and Beaufort seas, having managed to spend $4.5 billion without drilling a single well. But Russia's state capitalists have learned how to extract profit from being party to the solution of any political matter, no matter how complex. Rosneft could take up the slack at Sakhalin-4, but only if the tax regime is changed, says the company.

The Arctic Development Strategy outlines a justification for introducing a special tax regime. After all, according to the document, the continental shelf is to be the primary resource base of the reserve fund, which, in addition to offshore projects, will include several unallocated strategic subsoil plots with reserves of around 70 million metric tonnes of oil. The fund is being set up for a rainy day, sometime after 2020 when production at traditional sites is expected to drop significantly.

According to the Economist Intelligence Unit, the decline will occur at a rate of 2-6 percent per year, against an annual increase in global oil demand of 2 percent. The Russian Ministry of Energy estimates that by 2030 the country's oil production will fall from today's 500 million to 400 million metric tonnes. However, not all analysts are convinced that the time has come to develop the continental shelf. Dmitry Lukashov of VTB Capital, for instance, recalls that the U.S. took that step when their traditional deposits were depleted by 35-40 percent, whereas Russia's are only exhausted by a quarter. Moreover, most experts agree that without tax preferences offshore operations cannot even begin. It is a coercive measure, says Dmitry Baranov of Finam Management.

Work on a tax relief scheme for offshore projects slated to start in 2016 is underway at the Ministry of Energy and should be completed in April. The projects are due to be divided into four levels of complexity. Each will have its own preferential rate of mineral extraction tax: from 30 percent of the cost of raw materials for basic projects, to 5 percent for Arctic projects. Project operators may be exempt from export duties on oil, as well as import duties and VAT on hi-tech equipment. It is proposed that the tax regime be invariable for 5-15 years.

The Arctic is of interest not only to potential investors, but also their governments. There is even a line of countries seeking observer status in the Arctic Council, a body made up of the eight Arctic states. There are currently six observers, but the list of candidates is twice as long. Among the latter are China, Italy, Japan, South Korea, Singapore, and India. A decision regarding their status is to be taken in May at the next ministerial meeting of the Council.

Russian shelf: Source of crude or stimulus for innovation?

The political gaps are taking longer to bridge than the financial ones. For example, the borders of the Russian shelf in the Arctic Ocean have yet to be formalized. Their international legal registration, under the UN Commission on the Limits of the Continental Shelf in particular, is expected to take place by 2015. It is part of the first phase of implementing the Arctic strategy. The objectives of the second phase (by 2020) include achieving sustainable and innovative socio-economic development of the region. But that will only be possible if offshore operations prove successful.