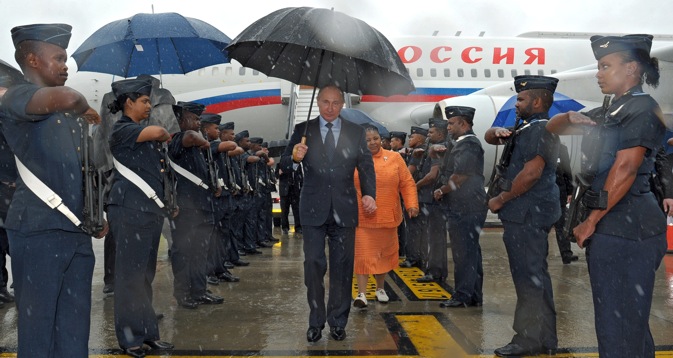 Besides the Development Bank, the formation of the Business Council will be a key outcome of the Durban summit.

DURBAN: The BRICS economies, which have emerged as beacons of growth and hope in times of the global slowdown, are poised to push the envelope for enhancing intra-BRICS trade and investment – the master-theme of the BRICS Business Forum that was held in the South African coastal city of Durban March 26.

The forum will culminate in the setting up of the 25-member BRICS Business Council March 27, which will comprise top five business leaders from each BRICS country. It will not be a talk shop, but a result-oriented permanent structure that will have its own secretariat and will impart greater economic heft and coherence to the $14 trillion grouping. At the plenary of the summit, the heads of states of BRICS countries will announce the list of all members of the BRICS Business Council. The council will meet twice a year. Besides the Development Bank, the formation of the Business Council will be a key outcome of the Durban summit, the first time the BRICS summit is being held on the African soil.

Cutting across continents, India, Russia, China, Brazil and South Africa may not be exactly natural economic partners, but the congruence of larger strategic interests and the ravages of the global slowdown have prodded them to bond and deepen their economic linkages to insulate themselves from the malignant fever of the Eurozone.

The sentiment was upbeat at the BRICS Business Forum which has brought around 900 leading business leaders from the five countries to the South African tourist hub in search of win-win deals and investments. Officially, the leaders of BRICS countries had set the target for scaling up intra-BRICS trade to $500 billion by 2015.

Given a renewed enthusiasm for expanding linkages among emerging economies, business leaders participating in the forum said they were confident that the 2015 target would not only be achieved but could easily be surpassed. Naina Lal Kidwai, country head, India, HSBC Bank, has voiced optimism about the trajectory of intra-BRICS economic cooperation. “There are enormous opportunities for BRICS countries. There is so much more than can be done in terms of intra-BRICS trade and investment.”

Kidwai said that the business forum has identified key focus areas of intra-BRICS investment linkages. These include: 1) Infrastructure II) IT and communication industries III) skills and training IV) energy and mining V) Manufacturing VI) agriculture. The discussions, according to Kidwai, focused on creating an enabling environment to spur trade and investment. This, in turn, entails addressing issues relating to legal structures, regulatory environment and connectivity.

The industry leaders from emerging economies have latched on to the BRICS opportunity to shore up their bottom-line, which has been adversely impacted by the prolonged Eurozone recession. It was clear from the profiles of captains of industry who are participating in the BRICS Business Forum. The top brass of leading Indian companies like the Tatas, Mahindra, Kirloskar and Apollo Tyres have descended in Durban to network with leaders of top companies of BRICS countries. The CEOs of Russian giants like Rosatom, Norilsk Nickel and Vnesheconombank are also in Durban to reap the BRICS dividend.

“It is of great importance for Russia to increase its trade and investment cooperation with its BRICS partners and launch new multilateral business projects involving our nations’ business communities. In Durban we intend to announce the formal establishment of the BRICS Business Council designed to support that activity,” Russian President Vladimir Putin said in an interview with the Itar-Tass news agency.

In his remarks ahead of the summit, Indian Prime Minister Manmohan Singh projected the Durban summit as an opportunity to “discuss ways to revive global growth and ensure macroeconomic stability, as well as mechanisms and measures to promote investment in infrastructure and sustainable development."

Underlining the new synergy developing among BRICS countries, India’s Commerce and Industry Minister Anand Sharma said South African companies can play a major role in India's plans to pump $1 trillion over the next five years in infrastructure development. “India is rolling out massive developments touching rail, road, telecoms, power and airport infrastructure. This makes for a perfect opportunity to increase trade and investment between the two nations and by extension, within the BRICS establishment," he told The New Age, a South African daily.

Sharma also stressed that BRICS member states were positioned to complement and learn from another. In the same breath, he, however, stressed that it was important to recognize the unique socio-economic circumstances confronting each of them.

Bridging knowledge and information deficit about business environments and opportunities will, therefore, be a critical factor in cementing and expanding intra-BRICS economic architecture. The Business Forum in Durban has set the stage for a marked acceleration of intra-BRICS trade and investment. The council has agreed on a plan that will include frequent visits by businessmen from one BRICS country to another. In a mutating world order marked by the rise of emerging powers and the shift of power from the West to the rest, economics will hold the key to the future of the five-nation grouping that account for more than a quarter of global GDP. In the end, the business of diplomacy is business, and it is this key yardstick by which the success of the BRICS grouping will be judged.

The writer is Editor-in-Chief of India Writes.  He is in Durban to report and analyse issues and outcomes of the 5th BRICS summit