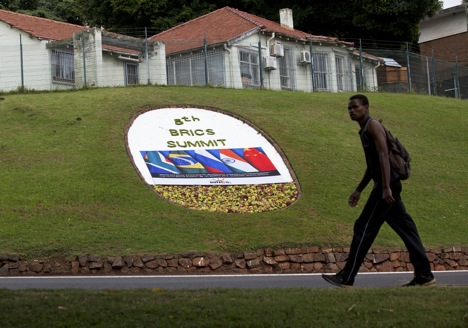 It’s a game-changer for the global South as the bank is envisaged as an alternative to the Bretton Woods institutions.

In a pioneering step that could change the dynamics of South-South geo-economic landscape, the BRICS’ finance ministers have cleared the path-breaking Development Bank that will cater to the funding needs of infrastructure-hungry developing world that is negotiating its ascent to the global pecking order.

It’s a game-changing moment for the global South as the bank is envisaged as an alternative to the West-dominated Bretton Woods institutions, an important milestone in accelerating reform of global financial institutions of governance.

“It’s done,” South Africa’s Finance Minister Pravin Gordhan said in the coastal South African city after a meeting with his counterparts from the other four BRICS countries. “We made very good progress,” Gordhan said.

Finance Minister P. Chidambaram represented India at the crucial meeting that has firmed up what is expected to be the showpiece deliverable of the summit of the $14 trillion grouping.

“In principle, there is some progress,” Russian Deputy Finance Minister Sergei Anatolievich Storchak told Reuters. Finance Minister Anton Siluanov stressed that the bank will be a work in progress, and key decisions on its location and funding will be decided later.

South Africa is upbeat about the bank and seeks to leverage the new institution to harness two billion consumers of the BRICS world – the new hive of economic virility in times of the festering Eurozone recession that has persisted stubbornly despite many attempts to fix it.

“The BRICS formation is an potential pool of over two billion consumers, so we have to explore opportunities for trade, explore opportunities for technological exchanges, learn from each other as how we create better-paid consumers to increase demand overall and learn how we work out how we are going to trade on a more even-handed basis with our bigger BRICS partners,” said South Africa’s finance minister.

The finance ministers’ recommendations on the bank will be encapsulated in the March 28 eThekwini Declaration that will mark the culmination of the 5th BRICS summit, the first meeting of the leaders of emerging economies which collectively account for over a quarter of global GDP, on the African soil.

The details of the bank, widely seen as a BRICS counterpoint to the West-dominated IMF and World Bank, are expected to be announced at the plenary session of the summit.

The BRICS Development Bank, which is set to create jitters in Western capitals, will, be a work in progress as key issues like the corpus of then bank, governance structure and voting rights may be decided over the next one year. The bank could take two to three years to become functional.

There is, however, a near-consensus on the core role of the bank as a catalyst in infrastructure-building in Africa and in the global south.

South African President Jacob Zuma, the host of the Durban summit, has struck an upbeat note about the prospects of the Bank, which is poised to be the show-stealer at the fifth BRICS summit.

The bank is set to unleash a wave of enthusiasm in Africa, a continent that has defied stereotypes to become a symbol of economic resurgence and the ineluctable African optimism.

“The funding requirements of Africa are far too huge. We need more funding institutions, and a bank from the BRICS block would be strategic and complement institutions such as the World Bank and the International Monetary Fund,” said Patrick Dlamini, CEO of the Development Bank of Southern Africa (DBSA).

(The writer is Editor-in-Chief of India Writes. He is in Durban to report and analyse issues and outcomes of the 5th BRICS summit.