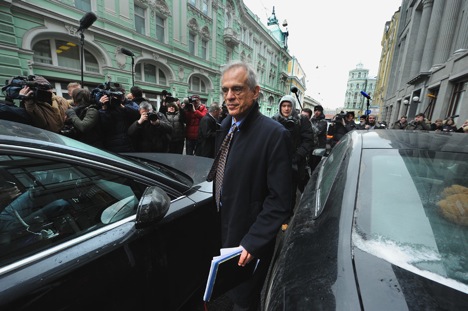 Russian companies control part of the 19 billion Euros of the mass of deposits in the Cypriot banking systems, controlled chiefly by the non-residents of Cyprus.

Now that the acute phase of the Cyprus crisis is over, the Russian authorities are considering the question of extending financial assistance to that country and at the same time criticising the European Union and in the insular state for the just-made decisions. Analysts are trying to figure out the exact figures of Russia’s losses the European plan for Cyprus would lead to.

On Monday, the European Commission and the International Monetary Fund agreed with the leadership of Cyprus the terms on which they would be prepared to lend 10 billion Euros. The new anti-crisis plan for Cyprus, authorised on March 25, does not envisage the introduction of a unified tax on bank deposits, something the Cypriot parliament earlier voted against. That initiative earlier drew an extremely negative response from Russia.

The new plan provides for the elimination of the country’s second largest bank – the Cyprus Popular Bank – with the loss of all of its assets in securities and, with a high degree of probability, practically the full loss of all unsecured assets – all deposits exceeding 100,000 Euros.

The largest Cypriot bank – the Bank of Cyprus – will remain afloat, but it should brace for painful streamlining and the loss of a considerable share of unsecured deposits. According to different estimates, the losses may range 20% to 40%. In a word, the second plan for Cyprus will inevitably lead to the loss of a considerable portion of Russian assets. It should not be ruled out that the losses may prove even greater than according to the original plan.

In the meantime, President Vladimir Putin instructed the Finance Ministry and the government to look into the possibility of rescheduling Russia’s 2.5 billion-Euro loan to Cyprus, which Russia extended in 2011. This transaction, according to Finance Minister Anton Siluanov, will help Russia save 250 million Euros.

Prime Minister Dmitry Medvedev on Monday held a special conference with deputy prime ministers to promise to calculate thoroughly the effects of the Cypriot crisis. Medvedev dropped a rather dubious phrase: “They seem to be robbing back what was robbed away!”

“Rob back what they robbed from us!” was a political slogan in Russia in 1918. It was an exact replica of the Marxist term “expropriation of the expropriators.”

One cannot but agree, say analysts, that some of those who are about to sustain losses in Cyprus are the holders of assets of shadow origin, but part of the money that will be wasted there – largely due to Russia’s inability since the summer of 2012 to analyse in detail the events in Cyprus – is transparent, legal deposits of big corporations.

Accurate calculations of Russia’s losses in the course of this transaction are impossible: Russia’s companies control part of the 19 billion Euros of the mass of deposits in the Cypriot banking systems, controlled chiefly by the non-residents of Cyprus (mostly from Russia, Ukraine and Lebanon), part of the 40 billion Euros of the funds belonging to the country’s residents (Cypriot companies obviously and not very obviously of Russian origin), and part of the unknown sum in the banking system of the country on the demand (settlement) accounts.

According to Moody’s, at the end of 2012 the amount of Russian companies’ assets in Cyprus might approach 19 billion US dollars. Another 12 billion dollars is found on inter-bank and corporate deposits in Cypriot banks.

Rosstat says that in the overall foreign investments in Russia 76.7 billion dollars (21 percent) came from Cyprus; in the amount of investments from Russia accrued abroad Cyprus accounts for 29.6 billion (25 percent). Russian businessmen were actively buying up real estate on the island and major companies used Cyprus as a settlement centre for transactions with the economic structures of the EU countries.

The VTB group is the sole of Russian banks that has a daughter bank in Cyprus – Russian Commercial Bank (Cyprus) – RBC. Under the most pessimistic scenario it estimates its losses in Cyprus at tens of millions of Euros.

Russian officials are unable to estimate the losses at this point. First Deputy Prime Minister Igor Shuvalov said that the authorities “do not have an accurate register of the losses that may be possible for Russian investors.”

According to Shuvalov, the Russian authorities have no idea if there is any Russian money in Laiki Bank or the Bank of Cyprus or not.

For such structures as Evraz and Norilsk Nickel, for metallurgical companies, some trading companies and all those who used holding companies in Cyprus the Cypriot crisis will be an extreme stress test. Consultants have been warning the Russian clientele of the risks of any transactions in the Cypriot financial system at least since January 2013, says the daily Kommersant.

The medium-term losses (from the severed contracts, lost interest, distracted of funds from the necessary re-crediting, missed benefits from the freezing of assets), let alone long-term and irreparable ones, are anyone’s guess, the daily says.

Obviously, Cyprus will most probably lose its offshore status. The current events may have several long-term effects – the next week of the Cypriot crisis may force the Russian clients of Cypriot banks to flee from the current risks to other jurisdictions.

Igor Shuvalov on Monday voiced the hope that this exodus would be Russia-bound.

The terms on which financial assistance will be extended have harmed the image of Cyprus. Besides, the European regulators will keep an eye on the banking sector for sometime. Naturally, the bank secrecy will be far harder to maintain. Russians will certainly turn their backs on Cyprus to opt for a safer haven, say Latvia, the RBC Daily quotes Capital Economics analyst Jennifer McKeown as saying.

“Cyprus has demonstrated its inability to keep the situation under control. In the medium term and in the long term the country will have no trust,” says UniCredit bank board chairman Mikhail Alexeyev.

There are some other opinions, too.

“I have met not a single person who would say I am closing shop in Cyprus. It does not suit me,” the director of the Moscow office of Tax Consulting UK Eduard Savulyak told the Russian service of the BBC.