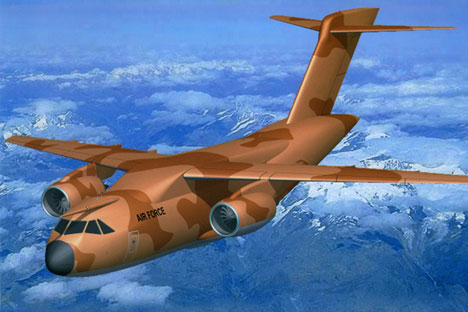 It is forecast that 205 aircraft will be manufactured, of which 30% are to be sold globally. Source: Press Photo/UAC-TA

The latest stage of the Multirole Transport Aircraft (MTA) project is presently being implemented by a Russian-Indian joint venture. As soon as the first prototypes are ready, Rosoboronexport will join the project to bring it to the global market.

"We have received a legal order and financing for the MTA from the Russian-Indian JV. Russia and India have an equal participation in the venture. Both countries have invested $300 million each, making a total of $600 million," deputy general director of JSC Rosoboronexport and head of the joint delegation of state corporation Rostech and JSC Rosoboronexport Viktor Komardin told reporters at the LIMA-2013 Arms Exhibition.

He said that on the Russian side the aircraft would be developed by Ilyushin Aviation Complex. As soon as Ilyushin creates, tests, and presents a working prototype, the JV will commence production. The aircraft is due to be built in both India and Russia. "Here, Rosoboronexport will play a big role," said Komardin.

Russia and India set up a JV to design and develop the medium-payload MTA. Its founders were India's HAL (50%) and Russia's United Aircraft Corporation (25%) and Rosoboronexport (25%). The headquarters of the JV will be based in Bangalore.

Production facilities will be located in both countries. The Indian Ministry of Defence plans to pre-order 45 aircraft, and the Russian Air Force is expected to purchase approximately 100. At the initial stage, it is forecast that 205 aircraft will be manufactured, of which 30% are to be sold globally.

The maximum take-off weight will be 55-60 metric tons. The vehicle will be able to carry different loads of at least 18.5 metric tons. It will be fit for use at high-altitude aerodromes and operational in hot climates.

First published in Russian in VPK.