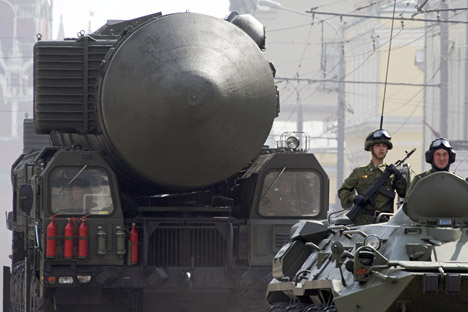 Nuclear weapons will not be effective in deterring or ending the types of conflicts that Russia is much more likely to have to face than a hypothetical war with NATO.

On April 5, 2009, President Barack Obama gave a speech that was supposed to set the agenda for his presidency in international security. “I state clearly and with conviction America's commitment to seek the peace and security of a world without nuclear weapons,” he proclaimed in front of an enthusiastic crowd in Prague.

Four years later, however, this drive to achieve “Global Zero” seems to have waned to a point when even another round of modest reductions in US and Russian arsenals appears difficult to achieve. Yet, I would argue that the United States, Russia and the other nuclear powers each have a stake in pushing forward toward world free from nuclear weapons.

Obama’s 2009 Global Zero rallying cry was welcomed by official nuclear powers such as Great Britain and China. India came out in support of eliminating nuclear weapons and influential policy leaders in Pakistan also backed the goal of Global Zero. A number of the world’s leading powers that do not have nuclear weapons but which could develop them with ease, such as Japan or Germany, also back a Global Zero world.

Church vs Nukes: Dilemma of a secret Russian town

‘No flexibility’ in US missile talks - Medvedev

Russia’s leaders also joined the welcoming chorus. Both Vladimir Putin and Dmitry Medvedev officially supported this “fourth wave” of nuclear abolitionism. Medvedev and Obama signed the New START treaty in April 2010, which both nations presented as evidence of their commitment to pursue nuclear disarmament in compliance with the Non-Proliferation Treaty (NPT)

However discussions on further reductions by the two countries, which together possess more than 90 percent of world’s nuclear weapons, have stalled over US missile defence plans. And Russia’s policy-makers in private are sceptical that their country will ever actually agree to go all the way to Global Zero.

Asked when he thinks Russia might agree to full nuclear disarmament, one senior Russian policy-maker is said to have quipped: “Mañana!”

This less than optimistic prognosis is rooted in the multitude of roles that Russia’s nuclear arsenal plays in the Kremlin’s defence, security, foreign and even domestic policies. In addition to deterring other nuclear powers and compensating for Russia’s inferiority to NATO and China, in conventional forces, Russia’s nuclear arsenal also re-affirms its great power status at home and abroad. It accommodates the institutional interests of the nuclear weapons sector in the military-industrial complex and the armed forces.

Given these multiple roles, one could say that “mañana” is overly optimistic – Russia will agree to full nuclear disarmament “bukra” (an Arabic word conveying a similar message as mañana but with even less urgency).

However, I would argue that nuclear weapons in fact play a narrower role than Russian strategists claim. For instance, nuclear weapons will not be effective in deterring or ending the types of conflicts that Russia is much more likely to have to face than a hypothetical war with NATO. These include an armed conflict with a conventional power, intrusion by insurgents, or low-intensity conflict with insurgents within Russia.

Some of the perceived benefits of nuclear weapons in a war are similarly problematic. A limited nuclear strike, which Russia has repeatedly gamed out in the “West” exercises, would not necessarily localise an armed conflict with NATO or de-escalate one were it ever to take place. Moreover, striking a nuclear power or alliance may actually escalate the conflict.

As for nuclear weapons’ role in preventing conflict among nuclear weapons states, the absence of nuclear weapons would not increase the probability of any such conflict occurring. The conditions for full nuclear disarmament that the Russian and US leaders have presented since April 2009 make it clear that neither will agree to a nuclear weapons free world unless they have developed effective conventional deterrents and established international arms control, security and verification systems. These measures should not only help to prevent former nuclear powers from attacking each other, but also to prevent potential threats from opportunistic rogue states.

One disincentive for Moscow on the road to Global Zero is that dramatic reductions in nuclear arsenals by United States and Russia would undermine the existing model of deterrence based on the concept of mutually assured destruction (MAD). We can hope, however, that calls made by senior diplomats on both sides to explore ways of abandoning the Cold War relic of MAD in favour of what they have described as mutually assured stability will bring results that remove this disincentive.

Yet another disincentive is that nuclear arms cannot be “un-invented” and nations may preserve the capacity to covertly acquire nuclear weapons, undermining the Zero in Global Zero. But this effect can also be minimized. One proposed solution would place a modest number of nuclear arms under UN control to deter opportunistic nations. Another proposal envisions robust and even intrusive inspections coupled. A combination of the two could minimize the risks. Weighing the long-term benefits of eliminating nuclear weapons against the long-term costs of keeping them reveals that the costs keep growing as nuclear proliferation continues.

The United States, Russia and other official nuclear powers cannot hope to hold on to their arsenals despite their commitments under the NPT treaty to eliminate them, while also trying to convince others to honour their commitments to refrain from acquiring nuclear weapons. True, fulfilment of these commitments will not ‘awaken the conscience’ of those set on proliferation and ‘shame them into stopping.’ However, without such efforts, it would be very difficult to win the international community’s support in trying to stop these proliferators.

The spread of technologies will inevitably, over time, allow ever more countries and, potentially, non-state actors to develop nuclear weapons, spurring on countries that have the technological capacity, but have so far abstained from developing these weapons, to follow suit.

The emergence of new nuclear powers will ultimately end the era of bilateral nuclear deterrence, and usher in an era of complex and unpredictable multilateral deterrence configurations, increasing the risk of a nuclear conflict, as Russian strategist Andrei Kokoshin rightly notes.

And while new nuclear states might be expected to act rationally or predictably and not to use such weapons against Russia, the same cannot be said of non-state actors.

Nuclear weapons will not prevent a nuclear attack by a group that is not clearly defined geographically or whose members are willing to die for their cause.

A nuclear-free world will probably prove unattainable even in the longer-term, due to the web of disincentives and the various roles that nuclear weapons play. However, if the leaders of the United States and Russia were to take further steps toward disarmament, and if other nuclear powers were to join them further down the road, the world would become significantly safer.