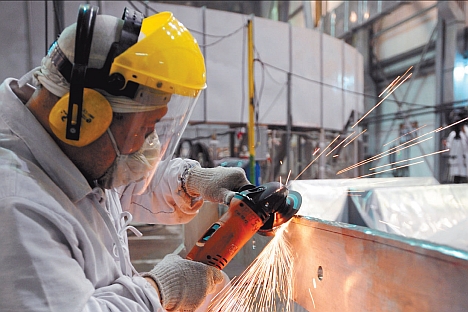 The melted core, hydro accumulators and an array of few more safety features had made the KNPP reactors unique in the industry. Source: RIA Novosti / Pavel Lisitsyn

Yevgeniy Dudkin tells The Hindu that the Kudankulam reactors are the safest in the world.

A leading Russian scientific expert vouched for the safety of the Kudankulam Nuclear Power Project (KNPP), which has faced the ire of protestors believed to be backed by Russia’s rivals. Yevgeniy Dudkin, head of the Russian Specialists Group at Kudankulam Nuclear Power Project told The Hindu that the superior technology and exceptionally high quality equipment used in the reactors at the project made them unique in the global nuclear industry.

Dudkin told the paper that the ‘hot run’ of the first reactor was successfully completed, as all components behaved exceptionally well during the tests.  Since the Russian government established Quality Management System with international standards, the companies manufacturing any component to be used in the nuclear industry would always be adhering to international standards, the report said.

Every part used and being used in the reactor and other parts fitted in the allied sections were being jointly inspected by Indian and Russian specialists prior to a series of tests conducted on them to ascertain their quality, the report said adding that the products were being received at the KNPP site jointly by the project’s engineers and Russian specialists, who would sign the documents to certify the quality of the components.

“If any of the observation made by one of the members questioned the quality of a particular component, it will not be installed until the issue is settled. Hence, there cannot be any room for compromise in quality in the products supplied to KKNPP,” Dudkin told the paper adding that the Russia side was addressing the issue of short supply of any of the components, if any, to avert possible delay in the execution of the project.

Dudkin told the paper that the VVER – 1000 technology, which has been used in the reactors under construction at Kudankulam, was a proven one, as two similar reactors constructed by his company, Atomstroyexport, a Rosatom subsidiary were functioning well in China.

“Inter-governmental agreement had been signed for constructing two nuclear reactors of 1,000 MWe in Bangladesh and construction on two reactors with similar capacity is to be started at Vietnam. Of course, we have planned to construct four more reactors at Kudankulam. This is purely because of the highest quality standards Russia has evolved over the years and the components with exceptionally superior quality,” The Hindu quoted Dudkin as saying.

Dudkin also told the paper that a number of passive safety measures installed had made the reactors the safest in the world. The report said that the passive heat removal system that could extract the residual heat from the reactors even during absolute power cut, quick boron injection system, the core catcher that would cover completely even the melted core, hydro accumulators and an array of few more safety features had made the KNPP reactors unique in the industry.

Kudankulam 3 and 4 costs would double if new law applied

“In fact, we will be pleased to introduce such futuristic safety measures in the reactors we are going to construct in other parts of the world,” Dudkin told the paper.

The Kudankulam units comprise of 1,000 MW reactors of the VVER-1000 model being constructed by NPCIL and Russia’s Atomstroyexport.