Foreign investors to have easier access to Russian strategic assets 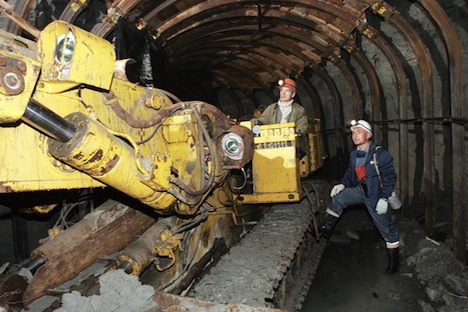 The amendments abolish preliminary approvals of transactions in the use of mineral deposits of federal significance if the state owns a controlling stake in the relevant business. Source: ALROSA

The government approved rules proposed by the Federal Anti-Monopoly Service to liberalise the access of foreign investors to strategic assets such as mineral deposits.

On April 4, Prime Minister Dmitry Medvedev approved amendments to the Federal Law “On Foreign Investments in Commercial Entities of Strategic Importance for National Defence and Security.” The procedure for considering petitions for approvals of acquisitions of shares in Russian strategic enterprises by foreign investors will be simplified.

The amendments abolish preliminary approvals of transactions in the use of mineral deposits of federal significance if the state owns a controlling stake in the relevant business, and the size of the stake remains unchanged as a result of the transactions. Also, no approval will be required if the investor already owns at least 75 percent in the company concerned. Furthermore, the law will not apply to transactions with companies under regional control.

The document is expected to help investors address the problem of the validity of previous decisions on the preliminary approval of transactions. There have been precedents in the practice of the Federal Antimonopoly Service (FAS) when a decision to approve an agreement was officially made, but investors didn’t have time to finalise the deal. The applicable law had only one way out for them – to file a new application with a full package of documents. If the amendments are approved, the applicants will only have to inform the regulator.

The amendments also specify the list of activities that are considered strategic. According to Armen Khanyan, director of the FAS Department for Control over Foreign Investments, the new law will not apply to enterprises that use biotechnological products to manufacture cheese, beer and baked goods (for instance, yeast and some types of mould fungi). These biotechnological products are qualified by legislators as ‘infectious agents’.

According to Ernst & Young Law partner Sergei Stefanishin, this will be a second series of amendments. Previous amendments were introduced in December 2011 to reduce the list of strategic activities. “We hope that legislators will continue their work to improve Russian regulations and reduce administrative barriers in those sectors where they are clearly excessive,” Stefanishin says.