Postal Service cries for help as packages pile up 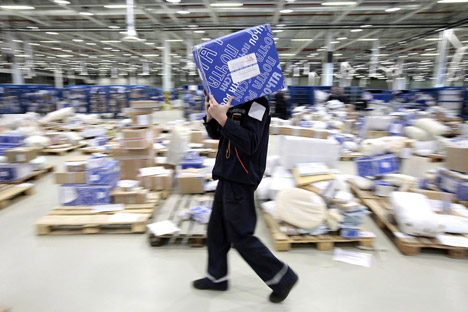 Russia’s Postal Service has increasingly been under fire for delays and inefficiency, with up to 20 percent of correspondences not reaching their addressees on time. Source: RIA Novosti / Ruslan Krivobok

Staffing issues at Russian Customs has led to 500 tonnes of backlogged mail packages, most of them online shopping orders.

Russia’s Postal Service has sounded an alarm over some 500 tonnes of backlogged mail packages, most of them online shopping orders that have not passed through customs due to staffing issues, Kommersant reported Tuesday.

Russia’s Postal Service Director General Alexander Kiselyov has sent a letter to Customs Service chief Andrei Belyaninov asking him to look into the problem, after complaints from Deutsche Post earlier last month that postal packages sent to Russia were not reaching their destinations.

But the backlog of postal packages has as much to do with customs as it does with the postal service, according to Russia’s Postal Service. Customs officials at airports like Vnukovo are severely understaffed and cannot handle the increase in postal traffic, Kommersant reported, citing a source in the Postal Service. Each day, Russia’s Postal Service delivers 48,000 small packages to the Customs Service, while customs is able to process no more than 37,000 packages a day.

In accordance with a 2010 decree by then-President Dmitry Medvedev, the Customs Service was to cut 20 percent of its civilian staff by 2013. To rectify this, Kiselyov proposed that the two agencies “prepare a joint address to [current President] Vladimir Putin to reconsider the… decree,” Kommersant cited Kiselyov as writing in his letter.

Meanwhile, postal traffic is expected to continue growing as an increasing number of people order products online. If the Postal Service delivered 2.3 million packages ordered online in 2009, by 2012 that number had grown to 17 million.

Russia’s Postal Service has increasingly been under fire for delays and inefficiency, with up to 20 percent of correspondences not reaching their addressees on time, according to figures from the Communications Ministry.

The government on Monday ordered the Postal Service to be transferred under the direct control of the Communications Ministry in an attempt to improve efficiency, according to an official statement posted on the government’s site.

Meanwhile, some 10,000 people have signed a petition to President Putin through Change.org asking him to “sort out everything and restore order” in the postal service.