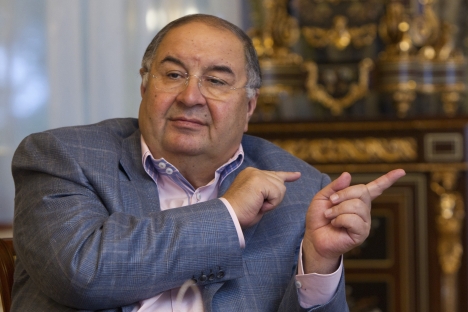 Alisher Usmanov, the owner of Metalloinvest metals giant and a major shareholder in London's Arsenal Football Club, has retained his top spot on the list. Source: Reuters / Vostock-Photo

The newcomers include Mark Kurtser, Moscow’s chief obstetrician and Vladimir Litvinenkov, rector of the St. Petersburg-based National Mining University and a minority shareholder in PhosAgro.

Moscow’s chief obstetrician, a deputy to Russia’s voucher privatization architect Anatoly Chubais and the rector of a university where President Vladimir Putin defended his thesis are among the lucky ones who have joined Forbes’ 2013 Wealthiest Russian Businessmen List published on Thursday.

Alisher Usmanov, the owner of Metalloinvest metals giant and a major shareholder in London's Arsenal Football Club, has retained his top spot on the list, even though his fortune has shrunk by $0.5 billion to $17.6 billion.

Mikhail Fridman, owner of Alfa Group, has climbed four places over the year to rank second with $16.5 billion, while Leonid Mikhelson, a key shareholder and head of Novatek gas company has climbed seven places on the list to come third with $15.4 billion.

The other top ten Russian businessmen include Viktor Vekselberg, owner of Renova Group, who ranks fourth with a wealth of $15.1 billion (up four places). He is followed by Vagit Alekperov, key shareholder and CEO of LUKoil oil giant with $14.8 billion who retains his fifth place and Andrei Melnichenko, chairman of the board of directors of EuroChem mineral fertilizer producer, with $14.4 billion (up five places).

The newcomers to the list are Mark Kurtser, Moscow’s chief obstetrician and the founder of the Mother and Child network of clinics, with estimated wealth of $950 million (112th place), Andrei Rappoport, former Chubais’ deputy at RAO UES of Russia and his current deputy at the RusNano hi-tech corporation, with a fortune of $950 million (115th place), Vladimir Litvinenkov, rector of the St. Petersburg-based National Mining University and a minority shareholder in PhosAgro mineral fertilizer firm with a fortune of $0.5 billion (197th place), and 13 others are new to the list.