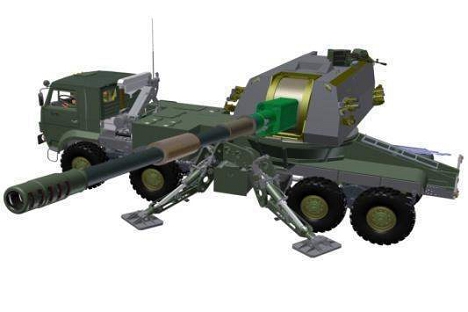 The Koalitsiya-SV 152-mm twin-barrel howitzer, based on the KamAZ-6560 platform, will premiere at the famed Nizhny Tagil tank show this September.

The Russian Defence Ministry has launched a programme to gradually replace tracked artillery pieces in its arsenal with wheeled types. Russia's first wheeled howitzer will be revealed to the public at the REA 2013 international military equipment exhibition in Nizhny Tagil in September.

KamAZ spokesman Oleg Afanasyev told Izvestiya that the new howitzer will be based on the four-axle KamAZ-6560 truck, which has a history of construction and military applications. The platform underwent minor modifications to accommodate the Koalitsiya piece, including the installation of a more powerful engine and a reinforced frame  to withstand the recoil.

"This is essentially the platform used in the Pantsir-S SAM system," Afanasyev explained. "It meets the factory and military specifications. It is also in production, which means there will be no production-entry hiccoughs."

According to Afanasyev, a prototype Koalitsiya platform has been shipped to the Motovilikhinskiye Zavody factory in Perm in Russian Urals, which manufactures the howitzer. Factory testing of the complete item is expected to last until late 2015, and will lead up to the official commissioning of the new weapon.

The new howitzer will reportedly be fully automatic, meaning that the crew will remain in the armoured cab for the loading and firing sequence.

Sources at the Defence Ministry told Izvestiya that the howitzer is primarily intended as an asset for assault and light mountain brigades, which require mobility and high road speeds. Lesser-priority recipients are medium brigades, which currently use wheeled armoured personnel carriers (APC) instead of tracked infantry fighting vehicles to transport personnel. Heavy brigades are expected to be armed with tracked vehicles, which are normally better armoured than wheeled vehicles.

Sources at the Missile Troops and Artillery Department of the Russian Ground Troops Command told Izvestiya that the KamAZ-based Koalitsiya howitzer would supplement the previously ordered superlight howitzer.

"This type of howitzer would best fit the needs of medium brigades with APCs, whose high share of wheeled vehicles and fairly high marching speed would warrant the addition of such an asset," he explains. "Tracked Msta-S howitzers or towed Msta-B howitzers would slow down the advance of a marching convoy within such units. On the other hand, the howitzer would prove useless for light brigades because it is too big to fit into an Mi-26 [transport helicopter], which is a mandatory parameter for light weapons [operated under the Russian military system]."

Tseluyko also notes that the Russian Ground Troops have previously attempted to develop a wheeled howitzer with the Msta-K barrel, but failed because the wheels were not sturdy enough to withstand the recoil loads.

Mock-ups of Koalitsiya family artillery systems, to be based on various chassis, were first demonstrated during Deputy Prime Minister Dmitry Rogozin's visit to Perm in July 2012.

It was at that time that Motovilikhinskiye Zavody proposed its grounds as the venue for a federal centre of innovative artillery technology, which was expected at the time to include Burevestnik and Yekaterinburg-based Artillery Plant No 9.