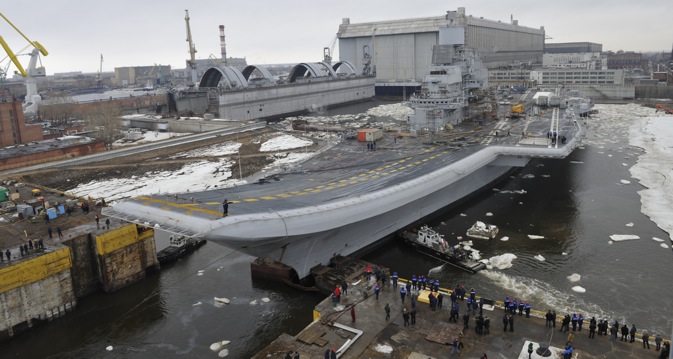 Sevmash engineers will perform repairs and maintenance during the initial 12-month warranty period, and then provide their services for another 20 years once the warranty has expired. Source: Maxim Vorkunkov / JSCo «PO «Sevmash» Press Service

The aircraft carrier will once again take to sea in July; flight tests are scheduled a month later.

The INS Vikramaditya has undergone a complex operation at Russia’s Sevmash shipyard ahead of the final stage of trials and delivery to the Indian Navy later this year.

With 10 weeks still left until July 3, 2013, when the final sea trials are due to begin, tug boats carefully manoeuvred the giant ship to a drainable pool. There the Vikramaditya will once again be put on a frame. Once the water has been drained, engineers will inspect the hull of the ship and all its outboard parts and components.

The Vikramaditya should be in India by the end of the year. Source: Maxim Vorkunkov / JSCo «PO «Sevmash» Press Service

According to the head of the commissioning team, Igor Leonov, all the procedures in the dry dock - which are compulsory for a ship after repairs - will take two months. So far, the project remains strictly on the latest schedule.The April 25 deadline for putting the ship in the dock has been met, Leonov said.

Ekaterina Pilikina, spokeswoman for the Sevmash shipyard, gave the media details of the elaborate operation. The main complication was that there were only a few centimetres to spare between the hull of the enormous ship and the sluice gate. To make matters worse, the team worked in strong winds and had only an hour at the peak of the high tide to complete their task.

The operation was observed by senior Sevmash executives; the head of the White Sea naval base, Vladimir Vorobyev; the captain of the Indian crew of the Vikramaditya, Suraj Berry and the head of the Indian observation team, Kudaravalli Srinivas. Both Indian representatives were impressed with what they saw.

108 days at sea spent in 2012 by the Vikramaditya crew and commissioning team during trials in the White Sea and the Barents Sea. Source: Maxim Vorkunkov / JSCo «PO «Sevmash» Press Service

Srinivas said this was the second time he saw such an operation. The first was back in 2008, when the ship was being taken out of the drainable pool after repairs. “Now Sevmash specialists have once again demonstrated their professionalism,” the Indian representative said. “They have coped very well with their task.”

The chief executive of the shipyard, Mikhail Budnichenko, expressed confidence that all the remaining work in the dock “will be done well and on schedule.” Sergey Novoselov, head of defence export projects at Sevmash, explained the nature of that work: “In accordance with the contract, we must inspect the state of the hull, the propeller-rudder system, and the sea valves. We will also restore the paintwork below the waterline, if necessary.”

Novoselov added that most of the problems identified during the sea trials have already been fixed. The ongoing refurbishment of the main boilers involves specialists of the companies which designed and manufactured them. The refurbishment is scheduled for completion in May. All the interim results of the project are inspected by the Indian customer and by the Russian MoD.

Repairs to the Vikramaditya’s steam boilers near completion

Vikramaditya equipment change to begin at Sevmash in April

Before the Vikramaditya can take to the sea once again, the Sevmash quality assurance specialists will be asked to present their findings on 435 separate items covering almost the entire ship, including tens of thousands of individual parts and components. In addition, much of the interior finish has yet to be completed.

“There are more than 2,500 compartments in the ship,” Novoselov says. “That includes combat stations, bays, cabins, engine and boiler rooms, power plant compartments, and a 120 metre-long hangar, which is about the same length as a football pitch. We must paint all these compartments, install the hardware, properly insulate all the piping and frame elements, and present the whole thing for the customer's inspection. In addition to the engineers setting up the main equipment, we also have painters, joiners, fitters, insulation technicians and other specialists working on the Vikramaditya.”

On occasions there will be more than 3,000 people on board the Vikramaditya this year because the schedule of the sea trials is very tight. The maximum number recorded in 2012 was only about 2,000. The Indian crew will account for the bulk of that increase; 1,326 Indian officers and sailors will begin their practice on the carrier at sea. Sevmash is already making plans for quartering all the sailors, members of the commissioning teams, pilots, mechanics and other air support specialists on the ship. The Vikramaditya’s three galleys will be working flat out nearly round the clock to provide catering.

In the autumn of 2012, the Vikramaditya was forced to return to Sevmash, where it had previously been repaired and refitted, to replace the fire-resistant insulation of the boilers, which began to deteriorate during trials in the Barents Sea. This and several other problems with the hardware had forced Russia to postpone the delivery of the Vikramaditya to the Indian Navy, which was previously scheduled for 2012.

The new delivery deadline is November 2013. Eight boilers must be refurbished before the end of May if that deadline is to be met. The ship is scheduled to take to the sea once again on July 3, so there will be a month left to test all the boilers of the main power plant, including operation at the maximum load. The next stage of the trials, which involves the planes and helicopters based on the Vikramaditya, is scheduled for August 3.

In mid-October the ship will return to Sevmash, where specialists will spend another month preparing it for the voyage to India.

“On July 2013 the aircraft carrier will begin sea trials in the White Sea; we will spend a month testing all the boilers of the main power plant under various loads. The next stage of the trials will commence on August 3 in the Barents Sea, and end on September 30. It will involve the planes and helicopters based on the carrier; the aim is to test the operation of the entire carrier-aircraft complex. One of the critical parts of the trials is aircraft landings on the deck of the Vikramaditya during night-time. These flights will begin in late August or early September, once the midnight sun period north of the Polar Circle is over.

Then the ship is scheduled to return to Sevmash in early October to begin preparations for the voyage to India. November 15 is the deadline for the aircraft to be delivered to the customer and (for the ship to) set sail for its new home in India. Incidentally, we are planning a shorter route for that journey, via the Suez Canal rather than around Africa. In accordance with the terms of the contract, Sevmash engineers will perform repairs and maintenance during the initial 12-month warranty period, and then provide their services for another 20 years once the warranty has expired."