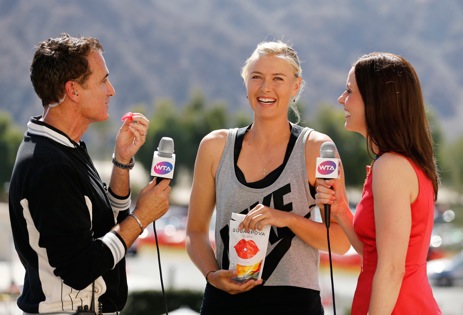 For someone known for her punishing ground strokes on the tennis court and elegant style on the red carpet, candy was not an obvious choice for a first foray into business. But all the pieces came together.

For her first truly independent venture outside of a tennis court, Maria Sharapova is relying on familiar tools: high heels, her cover-girl lips, and neon green tennis balls.

But she’s not starting a designer-shoe or lipstick brand, nor is she opening a tennis school. Instead, the budding entrepreneur and four-time Grand Slam winner has turned these parts of her golden image into shapes for a line of premium, bite-sized chewy candy.

For someone known for her punishing ground strokes on the tennis court and elegant style on the red carpet, candy was not an obvious choice for a first foray into business. But all the pieces came together.

“When I moved to the United States, I was about 7 years old, and I went to a movie theater and found a huge collection of gummy candies,” Sharapova said in a phone interview, speaking from Los Angeles on Saturday, a day after her 26th birthday. “I’d never seen anything like it in Russia. I was fascinated by the idea, and the first thing I thought was: ‘I can’t wait for my friends to see something like this!’”

“When the name Sugarpova came about in a meeting a few years ago, I felt like it was fun and young,” she said. “Then I put candy and that together, and that’s kind of how it started.”

Colourful packages of the sweets, which come in 12 varieties including Flirty (pieces shaped like sets of full, pursed lips), Chic (gummy handbags and high-heeled shoes), and Spooky Sour (sugar-coated spiders) first went on sale in the U.S. last year and have since entered stores in five other countries, including Britain and Japan. Sharapova arrives in Moscow on Monday for an event at the high-end Lotte Plaza shopping mall to mark the start of sales in Russia.

Born in the Siberian town of Nyagan, Sharapova spent her early childhood in Sochi, which she described as “the most beautiful place in the world.” She has relatives who still live in Russia and said the local market was on her radar for Sugarpova from the outset.

“I think Russians appreciate quality very much,” Sharapova said. “We all know that they like brands and they like names, but at the end of the day, I think they’re very good at differentiating what’s a good product and what’s not a good product.”

Sharapova spoke in English with the faintest of Russian accents but with the openness and geniality Americans are known for.

Being a Sochi native and a Russian Olympian — at the 2012 Summer Games in London, she became the first female flag-bearer for the Russian squad and won the silver medal in women’s singles — she is particularly excited about the 2014 Winter Games, and not just because she’s proud that they’ll be in her hometown.

“You have the Black Sea and the mountains, and I was talking about this for so long. When we got the Olympics, that was the first thing I thought of: I’m so happy because I will no longer have to tell people what that city is all about. They’ll have a chance to see it soon themselves.”

This interview has been edited for length and clarity.

Why did you choose candy for your first business?

Over the course of many years, I’ve been really fortunate to work with and be a part of many collaborations, whether it’s creating a collection for Nike or working with Cole Haan on shoes and bags or working on marketing ideas with TAG Heuer. So I’ve played a very small part in brands’ overall performance.

It took over two years to work on and create, which is maybe a little bit longer than other brands, but I wanted to make sure that everything was done right in terms of what our products stood for.

I’ve heard that you have a sweet tooth. What kinds of sugary treats are your favourite?

As a professional athlete, I’ve always had to find the right time for sweets. But those were the little rewards I would give myself. When I was younger, at the end of a practice, I would always ask my parents to buy me a little something sweet, like a lollipop back in Russia.

Are you able to harness your grit and determination from the tennis court in the business world?

There are very different kinds of businesses, and the one similarity between the candy company and tennis is the competitiveness. I want this to be the best gummy brand in the world. When I thought about the idea, I did a lot of Internet research on candies, and I asked my friends: “What’s your favourite gummy candy?” They would never mention a brand name. They would only name, for instance, the shape, like “Oh, that round one” or “bears” or “little worms.” I thought that was really interesting, because not one person told me a specific brand of candy, and I felt like there was a huge opportunity there.

What advice would you give to someone wanting to do business in Russia?

We first launched Sugarpova in the States, but Russia was a big target of mine. I think Russians appreciate quality very much. We all know that they like brands and they like names, but at the end of the day, I think they’re very good at differentiating what’s a good product and what’s not a good product. Maybe they’ll buy it once when it’s not a good product, but they realize it, and they’re not going to be repeat customers.

So it was important that we didn’t go out and try to push our candy into the country. It was the market from Russia that came to us and wanted our product because of how they saw it. We launched in the States and Australia, and then Russia asked for it.

What advice would you give to young Russians interested in starting a business?

For me, it was important to create a story that was mine about my brand and what I wanted it to stand for, the qualities it represented. I think that’s really important, because when you have an idea and you bring it into the world, you get many people’s opinions on it, and it can represent different things in their eyes. But I think you have to carry your vision no matter what, through the good and the bad, especially when you’re young and coming up.

I’m successful in what I do as a tennis player, but am I a candy connoisseur? Absolutely not. I had to learn through the process of creating the brand. I had to gain knowledge and experience to get myself to the position where I am now, where stores around the world want to carry my candy.

I had no idea that it would do so well in the beginning; I thought it would take a lot more time. But I think we were really helped by the fact that I knew what this brand represented: I wanted it to be a premium candy brand, from the quality of the products to the packaging and the way it’s represented. It was special, and I wouldn’t let anyone tell me otherwise.

Being a prominent Russian and playing for the national team, do you feel pressure to help improve Russia’s image abroad?

I’ve never really felt pressure, because I was born there and I’m very proud of where I come from. I still have a lot of family there, and I represent my country on a daily basis. I love so many different aspects of Russia, from the culture to the strength of the people and how they get through difficult situations; I think that’s a really unique quality.

I’m surrounded by foreign people and Americans because I’m based in the U.S., because of my tennis. But when I’m home and I’m around my parents and when I speak to my grandparents, I still feel like Russia plays a very big part in my life and in my heart. And do I feel a responsibility to play for my country? Absolutely, even though I left at a very young age.

Who are your role models?

That’s a tough one. I never really grew up having many role models, in or out of sport. When a little girl comes up to me and says, “I want to be just like you,” I think, “Oh, that’s great, but I think you should want to be better than me!” I admire people’s strengths, and I admire people’s actions that I believe are good or right, but I don’t think one person is good at everything.