How to stimulate the Russian economy 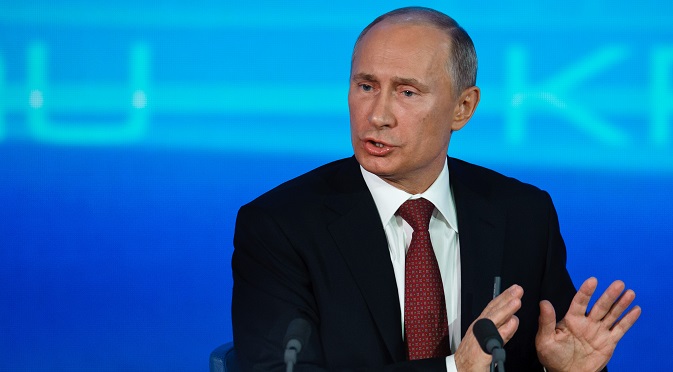 Putin said that despite global instability, the situation in Russia was not all that dire, citing the country’s large currency reserves and a budget surplus. Source: ITAR-TASS

A policy meeting chaired by the president has decided to support the Russian economy by re-jigging spending priorities and issuing infrastructure bonds. Oil funds are to remain untapped even if stagnation looms.

President Vladimir Putin has ordered his ministers to find ways of stimulating Russia’s flagging economy. Speaking at a recent meeting in Sochi, he said that the current GDP growth figure of 2.4 percent, which is well below the global average of 3.3 percent, was worrying. “We have not had it this bad for a long time,” the president said.

Russia’s economics minister Andrey Belousov warned last week about the risk of the Russian economy plunging into recession this autumn unless the government takes growth-stimulating measures. Speaking at the meeting in Sochi, the minister elaborated on his views. “The current slowdown in Russia can largely be attributed to domestic factors rather than the state of the global economy,” he said, naming a stronger rouble, higher interest rates and lower government spending among the main reasons.

Inflation, meanwhile, is slowing down. The acting Central Bank chief, Sergey Ignatyev, has reported that “so far, the 7.1-percent annualized inflation rate recorded in late March is higher than the 5-6 percent target we have set for ourselves...But I have a strong feeling that inflation will go down,” Ignatyev said, adding that the interest rates were also likely to fall. He said his confidence was based on falling grain prices, moderate money supply figures, and a balanced budget.

President Putin called for measures to ensure sustainable growth, reduce the risk of contraction in manufacturing, put in place safeguards against possible global contagion, and stimulate business activity. He warned not to expect the government to ramp up spending in an effort to stimulate growth, saying that such a path would be too risky. He also said that despite global instability, the situation in Russia was not all that dire, citing the country’s large currency reserves and a budget surplus.

Meanwhile, the OECD and the IMF have both recognised the dangers of excessive austerity, and a sharp reduction in government spending has been a leading cause of the ongoing recession in the Eurozone, Belousov said. But the Central Bank chief, Sergey Ignatyev, argued that a stronger rouble and higher interest rates should not be blamed for an economic slowdown because both indicators are currently at their pre-crisis levels, while credit financing of the real sector of the economy is growing much faster than GDP. “The situation with credit is exactly where we want it to be,” he said.

In Q&A, Putin talks about terror, takes on critics

Ignatyev was backed by Kudrin, who noted that even in Asia credit was not expanding at a faster rate than in Russia. Vyugin explained that the interest rates figure charged by the banks consisted of inflation (7 percent), risks (3 percent) and a profit margin (4-5 percent). “That is how we get the current figure of 14 percent, and that is the minimum the corporate borrowers currently pay,” he said. He added that if expensive credit really was the culprit, one solution would be to encourage the state-owned banks to cut their profit margins, and the privately owned banks would have to follow suit.

“We have already thought along these lines,” Putin said. He added, however, that such decisions must not be foisted on the economy by the government. “We do not attack our own financial institutions they way these institutions are being attacked in the West." He expressed his hope that the bankers would show responsibility and re-evaluate their risks and profit margins – taking into account the assistance they received from the state in their hour of need.

Participants of the meeting have all agreed that the so-called budget rule, which regulates the proportion of oil revenues set aside for the rainy day, must be preserved, Belousov said. Nevertheless, he still retains hope that the rule will be relaxed. “We'll have to wait and see,” he said when asked whether the size of the reserve fund could be reduced from 7 percent of GDP to 5 percent. He also said that the government was thinking about re-jigging its spending plans; there is a chance that spending on healthcare, education and infrastructure will be increased, with a commensurate fall in subsidies for state-owned companies.

Evgeny Gavrilenkov, an analyst with Sberbank CIB, says that the Russian economy consists of two segments: the privately-owned, which generates growth, and the state-owned, which generates nothing but inflation. He believes that one of the reasons for the current economic slowdown is that the budget rule has become self-defeating. The oil export revenues which are channelled to the reserve fund when the price goes above 91 dollars a barrel are simply being replaced by domestic borrowing. As a result, the government increases the demand for credit, and the interest rates rise in response. In the second half of 2012 the budget rule was already in effect, to all intents and purposes – and it came at a cost of a 150-200 basis points increase in interest rates, in addition to a slowdown in investment activity. “The paradox is that the lower the oil price, the better off the economy since it has more money left,” Gavrilenkov explains. He argues that keeping the growth in government spending under control does not necessarily require the budget rule: the effect of that rule is that the whole macroeconomic policy is bent to the single goal of increasing the size of the reserve fund. A much more sensible goal would be to reduce the inflation - that would be much more beneficial for the economy, Gavrilenkov says.

Ivan Chakarov, an expert with Renaissance Capital, doubts that the budget rule will be sacrificed in the name of supporting GDP growth. He believes that the economy might actually improve of its own accord starting from the third quarter. Analysts are predicting a good harvest this year; this will keep the lid on prices and help to increase real incomes.