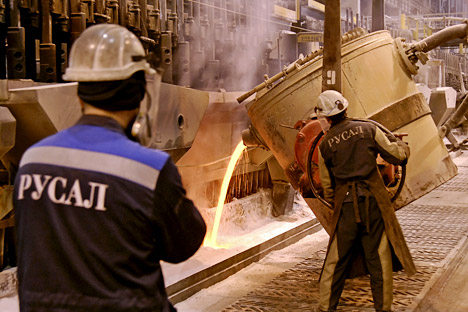 Emerging markets in South East Asia are expected to post similar growth rates in 2013, according to RUSAL. Source: ITAR-TASS

With the global aluminium market struggling with an oversupply crisis, the Russian aluminium giant believes manufacturers should scale back on production.

Skyrocketing aluminium output growth, predominantly in China, has led to a global crisis and market overheating. Prices have fallen (to $1800 per tonne), while global output shrank to a four-month low in March. The World Bureau of Metal Statistics estimated aluminium overproduction in January and February 2013 at 317,100 tonnes, despite a fairly rapid increase in demand by 472,000 to 7.6 million tonnes over the same period.

China became the unrivalled dominant force in the aluminium market last year. According to various estimates, it accounts for between 44 percent and 50 percent of global output. What’s more, throughout last year China remained a net importer of unrefined aluminium (to be fair, the difference between its imports and exports was only 7000 tonnes), after exporting more (by 433,000 tonnes) than it had imported the year before. Even though Chinese manufacturers incurred big losses due to overcapacity and falling prices, output of primary aluminium continued to grow in China at the beginning of this year (+15 percent). If it hadn’t been for China, output of the metal would have dropped by 3 percent, according to International Aluminium Institute experts.

To be fair, Russia has not stood still either. Exports of unrefined aluminium from Russia rose 5.8 percent in the first quarter of 2013. However, the gain amounted to a modest 1.6 percent for the whole of 2012.

“Now we can already talk about an aluminium overproduction crisis, which is impacting prices negatively. Around 25 percent of the global aluminium capacity is losing money today, which obviously is forcing producers to slash output and shut down inefficient capacity,” RUSAL Strategy and Business Development Director Oleg Mukhamedshin told RIR.

The Russian aluminium giant – number one in the world in terms of output – is planning to cut production by 300,000 tonnes as soon as this year. Overall, the company expects closures of 1–1.5 million tonnes of capacity worldwide, with the exception of China, which should help increase prices to $2200–2300 per tonne and see a real decrease in output as soon as in the second quarter. According to an earlier statement by RUSAL First Deputy CEO Vladislav Soloviev, China is expected to make a decision on aluminium production control in July or August.

“The entire world is approaching capacity expansion with caution: We can see that only two producers in the Middle East are planning to introduce new capacity within the next two years,” Mukhamedshin said. Emal, which intends to increase its capacity by 350,000 tonnes by 2014, and Maaden, which is expected to launch a 700,000 tonne per year project, are taking this risky step.

The RUSAL representative believes that the world’s largest producers need to slash production by 10–12 percent to create a situation where prices would within three years be driven by demand. “Otherwise, the crisis in the industry will only get worse,” Mukhamedshin added.

To complicate matters further, aluminium prices are determined today not only by an equilibrium of supply and demand, but also by the large amount of financial transactions that involve the metal. About 60–70 percent of aluminium stored at the LME’s warehouses is intended for financial transactions. “The amount in storage, at around 5 million tonnes, has remained virtually unchanged for several years. According to our estimates, we won’t see a decrease in LME stockpiles before 2014,” Mukhamedshin noted.

He also said that the desire of certain major mining companies to divest from their aluminium assets is a big mistake, because inefficient smelters simply change hands as a result of those deals, while their management issues remain unresolved. “Write-offs of previously acquired assets and ineffective investments in new capacity construction have already cost many CEOs of international metals and mining companies their jobs.”

That said, the aluminium overproduction crisis has had a very beneficial effect on demand. RUSAL is only projecting a drop in consumption in Europe so far – by 2 percent for 2013. Asia will remain the key demand growth driver. Global aluminium consumption will increase by 6 percent to 50 million tonnes in 2013. The highest growth rates will be reported in China (9.5 percent), India (6 percent), other Asian countries (5.8 percent), North America (5 percent), and Russia and the CIS (4 percent), Mukhamedshin said.

All key aluminium consumers are expected to see increased demand. For example, RUSAL projects a 5–6 percent increase in demand from the transportation sector in 2013, driven by a combination of global aluminium production and its penetration into auto manufacturing. Aluminium content in American made cars reached 150kg per model in 2012.

Demand growth is also projected for construction, which accounted for 27 percent of primary aluminium consumption in 2012. China, the world’s leading construction market, is expected to lead the way there too. RUSAL experts forecast 10 percent growth there. What’s more, emerging markets in South East Asia are expected to post similar growth rates in 2013, according to RUSAL.

Positive changes are also expected for packaging and electric engineering. The aluminium can and foil sectors (which account for a combined 13 percent of primary aluminium consumption) will keep growing as a result of population growth and the increased use of aluminium in those sectors. RUSAL estimates growth there at 4–5 percent in 2013. As far as electric engineering is concerned, producers are hoping for worn-out transmission lines to be replaced, the need to add 6000 miles of new lines in North America in 2013, a 7–8 percent increase in consumption by electric engineering sectors in emerging markets, including China, South America, India, and South-East Asia (including Indonesia), as well as the development of renewable energy sources in Europe, particularly in Germany, to compensate for a gradual phasing-out of nuclear energy. This will bolster demand even amid an adverse economic situation in Europe, the company said.