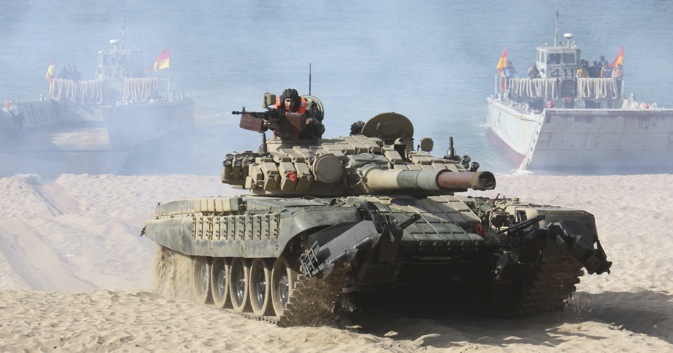 Russia is trying to designate its interests in the Black and Mediterranean Seas for a long-term period. Source: Reuters

Moscow is clearly designating its military presence in the regions because of the aggravating situation in Syria.

One of the key events to indicate the Russian Navy's stepping up its activity in the Black Sea region, was the surprise drill whose results President Vladimir Putin summed up on May 13.

On March 28, the supreme commander-in-chief ordered to launch a large-scale military exercise in the Black Sea region, and arrived in the Krasnodar Territory to check its progress. The exercise involved up to 7,000 servicemen, more than 30 ships, aircraft, rapid deployment units of airborne troops and marines.

In the recent years, all exercises of the Russian army have been conducted according to schedule. They were prepared for in advance: everything was spelled out in tactical assignments, the leadership of the Defense Ministry or even the country's leadership, and, sometimes, foreign observers arrived at the scene as the drill was at its peak. The war games were followed by routine analysis, and, of course, new decorations and promotions.

The March drill on the Black Sea dismantled this stereotype.

Putin made it clear at the conference that such "military shake-ups" would be standard. This kind of inspection of combat preparedness is most effective, as it allows for detecting shortcomings and oversights. "The purpose of these events is not to make formal reports or show off, but "to find out weak spots, and have a deep, careful and objective analysis of the situation in order to... perfect the structure and combat work of all units," Putin noted.

The establishment of Russia's Mediterranean task force would be another benchmark decision. It was announced by Navy chief Admiral Viktor Chirkov in Sevastopol as the Black Sea Fleet was marking its 230th anniversary.

The comeback of Russian warships to the Mediterranean Sea reminds of another decision: in August 2007, Russia resumed the flights by strategic aircraft to remote areas of the world. The flights had stopped in 1992. The Soviet Mediterranean squadron was dissolved on December 31, 1992.

In 2007, skeptics said the revival of strategic aviation in its former shape was not possible. At present, Russia strategic warplanes appear in the most unexpected places of the world. Things are more difficult with Russian warships in the Mediterranean region. In the Soviet times, the 5th squadron of the Soviet Navy operated in the Mediterranean Sea, and comprised 30 to 50 vessels in different periods. The task force was set up during the Cold War, and the USA's Sixth Fleet was regarded as its main opponent.

Russia creates an outpost in Belarus

At present, Russia considers a task force of five to six ships, and, possibly, a couple of submarines although the military do not rule out the participation of Mistral-type helicopter carriers. However, it is not the number of vessels but the very fact of their presence that is important now.

Meanwhile, the situation in Syria is aggravating. Vladimir Putin discussed the Syrian conflict with U.S. Secretary of State John Kerry, and then with British Prime Minister David Cameron. In world practice, diplomatic arguments are sometimes reinforced by military ones, especially because Russia is interested not only in partnership with Syria. The Syrian port of Tartus is the only point of Russian military presence outside the former Soviet Union. Moscow's wish to keep this base is understandable.

Yet the matter cannot be only reduced to political considerations of the moment. While stepping up its military activity in the Black and Mediterranean Seas, Russia is trying to designate its interests in these regions for a long-term period. It is not by accident that Putin demanded taking into account the results of the Black Sea drill in preparations for the West 2013 military exercise in the autumn.