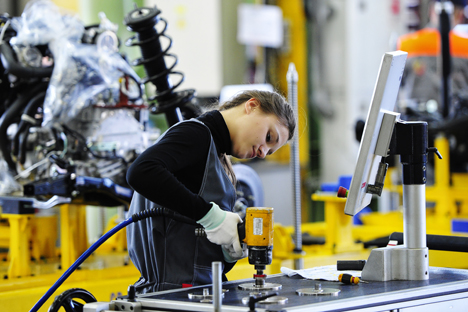 Kamaz wanted to be a part of Indian market because with the current economic situation no company in the world can sustain without the emerging economy of India, a key member of the BRICS forum. Source: ITAR-TASS

The co-chairs of the IRIGC are soon expected to receive the proposals on increasing the production of KVML plant at Hosur (Tamil Nadu) in India.

Russia and India at their intersession meeting of Indo-Russian Inter-Governmental Commission on Trade, Economic, Scientific, Technological and Cultural Cooperation (IRIGC),  last month, in Moscow, agreed to select a few  most promising projects for implementation to contribute actively to the substantial increase in the bilateral trade turnover of about $12 billion in 2012.  Indian External Affairs Minister Salman Khurshid and his Russian counterpart Deputy Prime Minister Dmitry Rogozin, who co-chaired the intersession meeting, discussed these projects, including the Russian-Indian joint venture Kamaz Vectra Motors Ltd (KVML) intended for increased production of Kamaz trucks in India, on a most priority basis.   The co-chairs of the IRIGC are soon expected to receive the proposals on increasing the production of KVML plant at Hosur (Tamil Nadu) in India.

Kamaz is based in Naberzhenye Chelny in the Russia’s Volga Republic of Tatarstan. It is the world’s 11th largest truck manufacturer and the 8th largest producer of diesel engines globally. It produces more than 30 models of trucks, as well as trailers, buses, tractors and spare parts. It also manufactures engines, power units, and components. The heavy-duty trucks produced by the plant have won the Paris-Dakar rally on many occasions. The Indian plant KVML is Kamaz’s 5th joint venture operating outside of Russia. The other four are in Kazakhstan, Pakistan, Iran and Vietnam.

Kamaz wanted to be a part of Indian market because with the current economic situation no company in the world can sustain without the emerging economy of India, a key member of the BRICS forum. Initially the KVML planned to invest $60 million in the country, out of which $20 million has already been invested for development of the assembly plant at Hosur. The remaining money was set to be used for capacity building and for bringing 100 percent indigenous trucks. In 2009, Kamaz OJSC and the Vectra Group signed the KVML joint venture agreement in Bangalore to manufacture the Kamaz range of trucks, at Hosur. In the KVML, Kamaz holds a 51 percent stake and Vectra 49 percent. In 2010, the KVML started production of Kamaz-6540 dump trucks with a gross weight of over 25 metric tons.

The plant had a capacity of rolling out 5,000 trucks annually and plans were to set up production of 7,500 units of truck variants by 2013. However, due to various reasons, including red-tapism from the local authorities and the sit-in strikes by the workers of the plant in the initial stages, the production has been far lagging behind the planned target. In 2012, it set an ambitious target of producing 3,000 trucks.

After his talks with Tatarstan President Rustam Minnikhanov in Kazan recently, Indian ambassador to Moscow, Ajai Malhotra said the KVML could achieve its projected capacity of 5,000 vehicles annually in 2014.

During its first phase, the KVML rolled out several right-wheeled truck models using the Kamaz-6540 tipper, and also started production of tractors Kamaz-5460 (4X2) and Kamaz-6460 (6X4), as well as Kamaz-6520 dump trucks. The company has localized most of the key aggregates achieving over 70 percent of indigenisation. It is planned that in three to four years 30 percent to 40 percent of all components for these vehicles will be produced in India.

During the plenary intersession meeting of the IRIGC, in Moscow, Denis Mamontov, the regional director of Kamaz for India, very briefly told the sides about the project for increasing the production of the plant in India within the framework of the KVML.

According to Mamontov, now the KVML is all set to enter serial production and establish its presence in the Indian market, as Kamaz considers India as one of its most important markets for growth and expansion with its sole commitment to it.

With this purpose, Kamaz on the basis of decades of its experience in producing trucks, is currently focusing on high tonnage, high capacity trucks and heavy commercial vehicles. The company is fully convinced that similar products will succeed in the Indian market too, although such products are not popular in India. In fact, it has been testing its products rolled out at Hosur plant on the Indian roads for the last two years, taking into consideration all local conditions so that the vehicles could be well-adapted to the Indian market.

In order to give a powerful boost to the production, in the next few years, the KVML is also planning to offer a customized design of its vehicles if so demanded by the customer, showing its commitment to customer satisfaction. So far as the component suppliers, the company is open to multiple suppliers for all components, with the choice of supplier influenced by market demand. The company is also keen on conducting large programmes for creating dealers and service centres across the country, with a view to having a multiple dealers in each state.

Secondly, in addition to fulfilling the demand of the Indian market, the plant is also exploring the possibility of exporting vehicles to Southeast Asian and African countries. Once the KVML fulfils its set target of production of 5,000 trucks, it will unveil plans for export to foreign countries. However, currently, its main target is to stay firmly in the Indian market. It expects to get a 10 percent share of the heavy-duty truck market in India and plans to export at least 20 percent of its products to foreign countries.

During the IRIGC intersession meeting, the Russian side also raised the issue of problems  faced by joint ventures of small businesses, including the KVML, in India from time to time, which seriously affect the production and subsequently bilateral trade and economic relations, in the long run.

In this connection, the Russian side cited the “illegal strike” by the workers of the KVML at Hosur, in February 2012, which paralyzed the production for over a month. It may be recalled when Kamaz started to reequip the plant, local trade unions demanded that it must hire 32 formerly dismissed workers, a demand which was fulfilled by the Russian producer. Late last year, the local trade union demanded that Kamaz hire another 15 workers, which was rejected by the plant’s management, after which trade union members broke into the premises of the plant to obstruct production. They seized the plant and did not allow the Kamaz to continue work.

Expressing high optimism on the decision to increase the production of KVML plant at Hosur, Kamaz sources on the sidelines of the IRIGC meeting said any agreement to increase the production was good for both the countries. “I think that Kamaz will be even more popular in the future in India, as the country has virtually no truck producers of its own,” one official told this writer on the condition of anonymity.

“Unlike other foreign truck manufacturers in India, Kamaz has actually made its name on Indian roads, known to be tough taskmasters, and given its track records, it will definitely make its mark on the Indian market as well,” he noted.