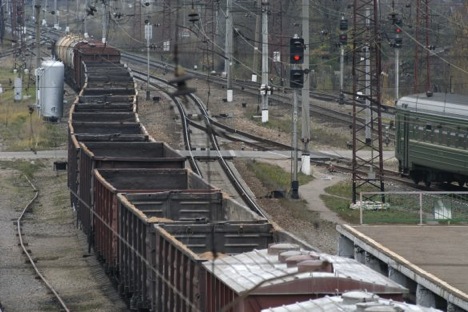 The idea of North South corridor linking Russia’s south to India through the vast Eurasian landscape is getting off the ground with the construction of the Caspian Sea Eastern Rail Corridor.

The inauguration of Caspian Sea Eastern Rail Corridor in Astana a few days back added another element to the rising vision of Eurasia as a connected space for trade, communication and development. The rail road originally mooted by Iran, Kazakhstan and Turkmenistan holds high potential in not only linking Central Asia to Persian Gulf but also in linking Russia to India, China and Indian Ocean through Central Asia. The resource rich countries of Turkmenistan and Kazakhstan are landlocked, and the building of the rail road would bring better prospects of trade and development for those countries as well as for the whole region. The idea of North South corridor linking Russia’s south to India through the vast Eurasian landscape, consisting of the former Soviet Union and neighboring countries, has become an increasing possibility with the building of this road. Iran expressed jubilation at the opening of the road and hoped that the road will shorten the distance of trade between Central Asia and Iran, and will further extend the road link to other countries of the region.

While inaugurating the 146 kilometer rail road of the larger project of about 1000 kilometer road, the leaders of Kazakhstan and Turkmenistan made it clear that this rail road linking Kazakhstan, Turkmenistan and Iran is not the end of this connection process. Turkmen President, Gurbanguly Berdymukhamedov widened the joint ambition of linking the railroad “to such economic centers of global development as China, India and the Asia-Pacific.” Kazakh President, Nursultan Nazarbayev too harped on this broad agenda of making the whole Eurasian space well connected. He emphasized in his speech: “Today, when many countries are still overcoming the consequences of the financial crisis, we have managed to complete such a large-scale transport project.” Besides the rail road the two leaders also declared the launch of a fiber optic data line which would link “Kazakh networks with those of Afghanistan, Turkmenistan and Iran, and Turkmen networks with Russia, Eastern Europe and Asia via Kazakhstan.”

One of the major hurdles against development, particularly in Central Asian region, is lack of connectivity. Though the region is historically traversed by the famed Silk Road with its famous centers like Samarkand and Bukhara, the region is comparatively less economically developed with trifle bilateral trade. For instance, the bilateral trade between Turkmenistan and Kazakhstan stands at about $345 million, not even one billion. Besides poor economic cooperation, the ethnic strife among some of the countries, and spill over effects from Afghanistan, and the rise of radical forces made this region laggard in economic development.

The signs, however, are propitious in the context of integration. Instead of building a grand Eurasian corridor, the trend so far has been building smaller linkages and then connecting all those linkages into a wider North South Eurasian Road, which can have components of concrete road as well as rail road, and at places it can be linked by sea. There are already attempts in this direction. Chinese involvement in building roads in Central Asia including in Uzbekistan and Kyrgyzstan, India’s involvement in building roads in Afghanistan can further the integration process. The roads in Central Asia can be further linked to Afghanistan, and towards India and Indian Ocean through Pakistan. In east west direction it can be stretched from the Persian Gulf through Iran to Pacific Ocean through Russia and China. In terms of trade in energy, there is already a pipeline operating between Turkmenistan and China via Uzbekistan and Kazakhstan since 2009. Pipelines like TAPI and IPI are also positive signs for this integration in the Eurasian space.

The Caspian railroad, built at the cost of $433 million, will help reduce both transaction and time costs from these two Central Asian countries to Iran, and it will give them access to Persian Gulf. Besides, it will increase trade between these three countries. One thing that needs mention is the Iranian involvement in this Eurasian project. Currently undergoing a huge geopolitical churning, the increasing Iranian involvement in Eurasia will enhance its geopolitical clout in the international stage. Iranian Minister of Road and Urbanization Ali Nikzad expressed satisfaction that the joint railway connecting national networks of Iran, Turkmenistan and Kazakhstan would promote energy, trade, economic, transportation and communications interactions in the region.

One of the ideas that Russia has harped on particularly after Vladimir Putin assuming the current presidency is the idea of Eurasian integration. The integration of Eurasia is not an infeasible proposition but a practicable reality. Whether it is Silk Road in the region or the ethnic or linguistic links within it, an integrated Eurasia has the potential to emerge as the largest economic zone in the world. Besides economic, other areas of focus of this integration process will be to tackle religious extremism and terrorism and drug trafficking.