Embassy of the Russian Federation in the Republic of India 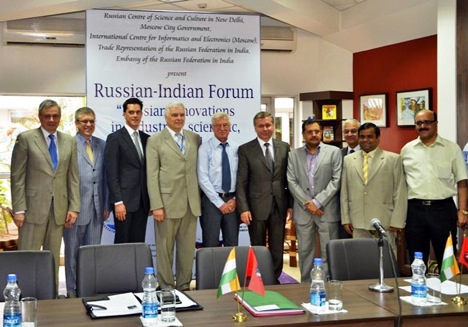 The potential for Delhi-Moscow cooperation is very high. Source: Embassy of the Russian Federation in the Republic of India

A two-day Indo-Russian forum introducing Russian innovations in different fields to Indian counterparts, organised at the Russian Centre of Science and Culture (RCSC) in New Delhi on May 21-22, 2013, concluded with a clarion call on intensifying bilateral tie-ups by means of exchange of delegations, technical know-how, investments and adoption of innovations.

Mr. S. E. Cheremin, Minister of the Moscow Government, Head of the Foreign Economic and International Relations Department of the City of Moscow, Chairman of the Board of the Business Council for Cooperation with India, member of the Russian-Indian Inter-Governmental commission on Trade, Economic, Scientific, Technological and Cultural Cooperation, provided an enlightening lead to the round-table discussion on the second day. He described the event as a significant meeting of Moscow and Delhi representatives to discuss the multi-dimensional development of modern mega-metropolises. Citing the large plans of building the Moscow agglomeration, the Minister underlined the finalisation of the concept of the capital city’s development as the new international financial centre.

“The current level of Moscow’s gross regional product (GRP) is estimated above $ 320 billion. GRP volume puts Moscow among the world’s largest front runner cities. Moscow concentrates over 80 percent of the national cash flow and more than half of Russia’s bank capital”, Mr. Cheremin said. He recalled the successful joint work in the course of the Economic and Investment Cooperation Forum that took place within the framework of the Days of Moscow in Delhi in October, 2012, and the signing of the Cooperation Programme between the governments of Moscow and Delhi for 2012-2015. He offered some key topics for discussion such as drafting the plan of sharing experience and consultancy services on mega-cities security and possibility of joint software development.

“Joint infrastructure projects aimed to provide security of the residents of the big cities, creation of programme products for managing the traffic and creation of medicines on the basis of Russian scientific and medical centres can be promising areas of our cooperation,” Mr. Cheremin said in his speech at the solemn opening of the forum.

He also noted that the Government of Moscow is interested in modernisation of the healthcare objects using the newest Indian medical technologies and equipment. “We also invite Indian companies to take part in Moscow’s purchasing and state investment programmes and cooperate in making Russia’s capital the international financial centre,” Minister Cheremin said.

The Moscow City Government was also represented by Vladimir Lebedev, Deputy Head of the Department for Foreign Economic and International Relations of the Russian Capital. Mr. Lebedev stressed that, since the Moscow area is being expanded, there is considerable demand for foreign investment and international business cooperation in the fields of construction, modernisation of transport systems, social infrastructure and medicine. He noted that Indian business in Moscow is developing fast, and the present increase is at the rate of 20 percent.

Special focus was made on cooperation in security issues. A round-table was held between representatives of the Russian Ministry for Civil Defence and Urban Development Department of the Government of NCT of Delhi.

Addressing the meeting, Mr. Michael Rapota, Russian Trade Commissioner in India, referred to Delhi-Moscow cooperation as a matter of highest priority. He stated that the potential for inter-regional cooperation was very high, adding that the innovation was an important objective of the current forum.

Making his observations, Mr. Vyacheslav Vasyagin, Deputy Director-General of the International Centre for Informatics and Electronics from Moscow made it emphatic that the aim of the mission was to introduce the Russian innovation in machine-building and production of light aircraft equipment, chemicals and other fields such as trade, tourism, education, etc. He said that 500 Indian companies have already been registered in Russia. “In the field of joint research and exchange of technological know-how, there is great potential between Russia and India”, Mr. Vasyagin pointed out.

Hailing the business atmosphere in Russia and India as encouraging, Mr. Evgeniy Korshunov, Deputy Trade Commissioner, noted that despite the global financial crisis, the bilateral trade turnover crossed the $ 11 billion mark, and the share of high-tech was increasing. By 2015, the figure is expected to reach $ 20 billion. The export from Russia in items such as equipment, power energy, oil and gas constitute 50 percent. Explaining the positive effect of Indian investment in sectors like IT, computer, pharmaceuticals, energy saving and nuclear technology, he noted that last year a number of business delegations visited India.

“I am happy to note that India is the first country of South-East Asia, attended by the Russian delegation in the framework of business and humanitarian missions of InterEVM”, said Director of the RCSC Mr. Rozovskiy. “Russia puts more efforts to represent itself in South-East Asia”, he added. In May-June, 2013, the delegation will visit Nepal, Vietnam and Cambodia.