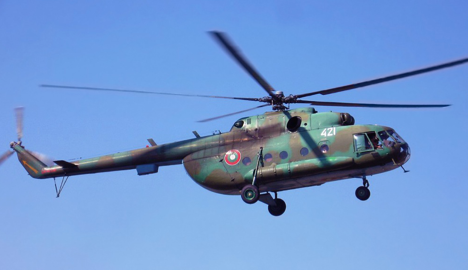 Only the Defence Ministry’s Mi-8 helicopters will be grounded. Source: Press Photo

The Russian Defence Ministry has grounded its Mi-8 helicopters after one of them crashed in the Volga area at noon on Tuesday.

A Mi-8T helicopter, owned by the Syzran branch of the Gagarin Air Force Academy’s training centre, crashed while performing a scheduled training flight near the village of Ivanovskoye in the Saratov Region.

The aircraft’s pilot in command and his trainee used parachutes to evacuate before the helicopter crashed. They received minor injuries and are now under medical supervision. Their condition is not life-threatening. The third crew member - a flight engineer - was unable to leave the cockpit and died.

“Air Force Chief Commander Lt. Gen. Viktor Bondarev ordered to suspend flights of helicopters of this type pending an investigation into causes of the crash,” the Defence Ministry said in a statement.

A defence ministry commission is now working at the site of the crash. The helicopter’s flight data recorder and cockpit voice recorder have already been recovered.

Russian investigators have launched a criminal investigation into suspected violation of aviation rules.

This is the fifth accident involving a Mi-8 helicopter in Russia this year.

A Mi-8 helicopter carrying nine people crashed in the Irkutsk Region on May 6. The helicopter was on a mission to monitor the flood situation in the area, and was carrying 1.9 metric tonnes of explosives to blast ice dams in a river.

On March 16, a Russian military helicopter crashed during a landing attempt in bad weather near Grozny, the capital of Chechnya, killing three people and injuring one.

The other two accidents were minor and resulted in no deaths or casualties.