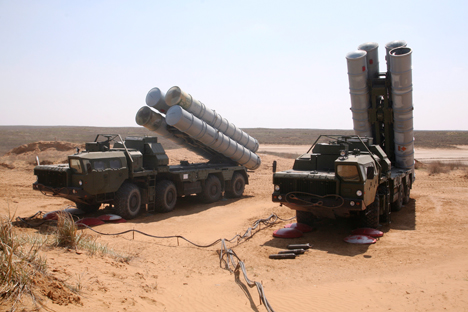 The S-300PMU1 long-range surface-to-air missile system is designed to fight off the most widely used modern aircraft, as well as cruise, aeroballistic, tactical and short-range attack missiles. Source: ITAR-TASS

The S-300 is a family of initially Soviet and later Russian surface-to-air missile (SAM) systems. RIR looks at several modified versions of this system, which Russia may supply to the Syrian regime.

In the late 1960s, the Soviet Union began developing a new 100 km-range surface-to-air system in view of the growing potential of air assault weapons, particularly after the air-launched cruise missile ALKM was introduced in the USSR approximately at the same time the West was working on the design of its Patriot SAM complex.

The new weapon, named the S-300, was devised as a universal antiaircraft and antimissile system. Its first trials were held in the mid-1970s.

Designated use and features

The first medium-range S-300 model was designed to defend important administrative, industrial and military facilities against strikes by strategic and tactical aircraft, as well as cruise and aeroballistic missiles. This system has been the core of the country’s air defence forces since 1975.

The key feature of this SAM complex is its high mobility and multi-channelling capacities, allowing it to engage several targets at the same time, which is vital for fending off large-scale aircraft and cruise missile attacks.

A number of S-300 variants have been in service with the Soviet and Russian air forces, including both land-based (wheeled and tracked) and naval versions.

The S-300 PS is a self-propelled model (the “S” in the name; the P suffix stands for PVO, that is, the country’s air defence forces) introduced in 1983 in consideration of the lessons learned during military operations in Vietnam and the Middle East, where the survivability of air defence systems depended on their mobility and ability to leave a shelled area in a timely manner.

The new SAM only required 5 minutes to switch to travel mode or be deployed at a new position after a march. After 1991, the S-300 PS was tested at a firing range and found to be highly effective against missile strikes, outperforming the US Patriot surface-to-air system.

Though appearing similar to previous models, the S-300PM (“M” for mobile) had a number of features differentiating it from other S-300 variants and the Patriot system. One of the key differences was a new single-stage surface-to-air missile employed in the system.

The 48N6 is capable of attacking an aircraft flying at a speed of up to 1,800 m/s from a maximum engagement range of 150 km and of intercepting stealth cruise missiles at altitudes of 100 m or less from within 38 km. The missile remains permanently ready for combat throughout its service life and does not require regular maintenance.

The S-300PM was produced in mobile (mounted on all-terrain vehicles) and towed versions. The manufacture of the S-300PM and S-300PS, which had been the cornerstone of Russia’s air defence for years, was discontinued in 2011, as the country’s military is gradually transitioning to more advanced SAM systems.

The S-300PMU1 long-range surface-to-air missile system is designed to fight off the most widely used modern aircraft, as well as cruise, aeroballistic, tactical and short-range attack missiles.

This automated jam-proof SAM system can be used stand-alone or as part of an air defence unit. The first mass-produced S-300PMU1 prototype was presented at the International Aviation and Space Show (MAKS) in 1995.

Compared to its prototype, the S-300PMU1 has an extended engagement range of 150 km and 40 km for aerodynamic and ballistic targets, respectively, and a wider target speed range (35-2,800 m/s). The system is available in mobile and fixed options.

The S-300PMU2 Favorit long-range area defence missile system is an extensively upgraded version of the S-300PMU1 designed to protect key facilities of military and national importance, as well as troops, from any modern airborne threats, day and night and in any weather, climatic and geographical conditions, against a backdrop of intensive electronic jamming by the enemy.

Some of the S-300 Favorit’s key features include: Maximum engagement range extended to 200 km.Increased efficiency against aerodynamic, including low-observable (stealth), targets at extremely low altitudes in a complex radio interference environment.

Can be integrated into other air defence systems, including NATO’s, and use S-300PMU1 missiles.

The S-300 Favorit has a great export potential, as it is believed to be the most universal air defence system invented to date. The older S-300PM and S-300PMU1 systems may be upgraded to the S-300PMU2.

The S-300 Favorit is equipped with a command and control centre consisting of a detection radar connected to up to 6 SAM complexes.The command and control unit automatically distributes the targets between the SAM systems and does not have any missiles itself. A universal mobile tower provides increased fire range control capabilities. The Favorit may also be fitted with two additional all-altitude and low-altitude radar stations.

Russia’s S-400 systems represent the next generation of surface-to-air missiles taking after the S-300.

Each of the 6 SAM complexes constituting part of the system includes up to 2 self-propelled launchers capable of carrying a maximum of 4 missiles each, as well as one fire control/illumination radar.

When the Soviet Union collapsed, some 3,000 launchers representing various S-300 modifications were deployed in the country. S-300 SAM systems have never been used in any actual military operations. Numerous firing drills conducted by the countries employing the S-300 have produced evidence that, according to various experts, testifies to a very high combat efficiency of this air defence system. The S-300 outclasses its American counterpart, the MIM-104 Patriot, in many key areas.

As of today, various S-300 modifications are used both in Russia and abroad, including in several CIS states, as well as Slovakia, Bulgaria, Croatia, Greece (Crete), China, Vietnam, Venezuela and Algeria. Turkey is also reported to have plans to acquire the S-300 for its army. In order to study the system, the United States purchased some of its components in the 1990s. The S-300 technology has also been used by South Korea, which developed its Cheolmae-2 SAM system jointly with Russian specialists.

Based on materials published by the Oruzhie Rossii [Russian Weapons] news agency and in public domain resources.