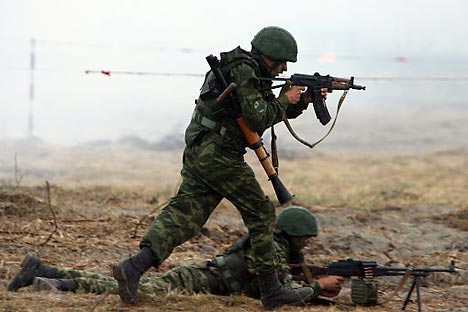 At the end of May, the Russian military was subjected to the biggest exercise in the last two decades to assess its capability to fend off and launch assaults in the sky.

On May 27, several thousand Russian soldiers were woken up at 5:00 in the morning by a surprise alarm. The Russian Ministry of Defence staged the biggest drills in more than twenty years to test the country’s Aerospace Defence Forces, Long-Range and Military Transport Aviation, the Missile Defence Division in charge of defending the Central Industrial Region and Moscow, as well as the Western Military District’s 1st Air Army.

In February this year, the country’s Airborne Forces and Central Military District troops underwent the same test. In March, President Putin ordered that drills be carried out with the participation of the Southern Military District troops, the Black Sea Fleet, as well as Air, Missile Defence and Airborne Forces corps and units stationed in the Krasnodar and Rostov Regions. This time, the exercises were extended to include the Aerospace Forces, which were set up just over a year ago by joining the Space, Air and Missile Defence Forces, as well as Early Warning Radar, Space Tracking and Electronic Warfare units.

The tasks at hand were rather challenging: for example, several Western Military District’s Air Force regiments equipped with S-300PMU2 Favorit surface-to-air missile systems were relocated from the Leningrad Region to the Ashuluk military station in the Astrakhan area. There, the troops marched several dozen kilometres before deploying in pre-combat formations to repel a massive air offensive by the opposing forces.

The role of the aggressor was assumed by several attack aviation squadrons, which took off from the Baltimor airfield near the city of Voronezh to attack the targets at Ashuluk. They launched an offensive at all altitudes, coming at the ground compounds from all directions and using jamming systems to impede target engagement by anti-aircraft radars.

Even so, according to the observers, all cruise missile strikes aimed at the anti-aircraft units were intercepted and aircraft and were destroyed by the S-300s.

The MiG-31 interceptors stationed for round-the-clock combat duty in Russia’s northern territories have trained in detecting and destroying enemy aircraft, the military confirmed. An A-50 radar picket aircraft ensured timely engagement of the approaching targets by the interceptors.

During the drills, the Western Military District’s bombers were redeployed to defend the outlying airfields against Su-24 and Su-34 attack aircraft bombing and carrying out missile strikes on ground targets, as well as to launch an offensive against the enemy aircraft and cruise missiles in the sky. In the meantime, the Aerospace Defence Forces were warding off hostile sea-borne assaults.

The Russian Aerospace, Air and Anti-Missile forces have not participated in any drills of such a scale for more than twenty years. Given the absence of any public media reports on previous military exercises involving Moscow’s missile defence troops, which are now part of the Aerospace Forces, the Russian government seems to attach great importance to keeping these units ready to counter an unexpected nuclear strike.

The Russian military did not disclose who the potential enemy dealt with during the drills was but there are reasons to believe we may already know the answer.

Russia has repeatedly expressed concern over plans to create a European missile shield. This issue was highlighted in a recent communication exchange between Vladimir Putin and Barack Obama, as well as at an international conference on European security held in Moscow the day before the drills. After the event, Russia’s Defence Minister Sergei Shoigu paid a visit to the Voronezh-DM early warning radar station in service in the Kaliningrad Region.

Russian President Vladimir Putin said the results of the drills this week to test the country’s Aerospace Forces were “satisfactory” and urged the military to modernise its control and telecommunications systems.

In this light, the question of which state or organisation is capable of challenging Russia’s missile defence today has quite an obvious answer: the United States and NATO, respectively. Apparently, they were the “potential enemies” during the drills.

No foreign military observers were invited to monitor the manoeuvres – not only because the decision to carry out the drills came at such short notice but also because the Vienna Document only requires experts from abroad to be present at military exercises in which more than 9,000 people participate. This time, the drills were 300 people short.

At a Russian Defence Ministry general meeting held on May 30, it was confirmed that surprise tests assessing the combat readiness of various military districts, services and branches of the country’s armed forces will continue in the future.