The Russian economy: 22 years after modernization 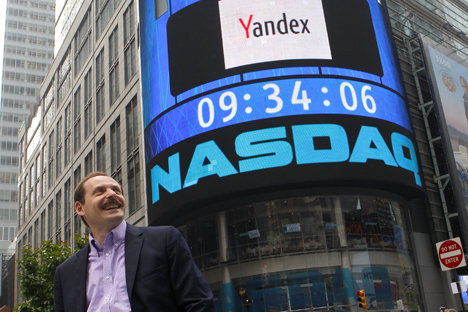 Yandex is one of the most successful Russia's IT-companies. Source: Reuters

The Russian economy now has an opportunity to harness the unique heritage of the communist empire with modern ideas and solutions.

In 2009, the Russian economy fell by almost 8 percent, alarming many citizens who feared a repeat of the crash in 1998, when whole branches of industry came to a standstill, the most systemically important banks went bust and candy wrappers almost became currency.

Drawing lessons from the 1990s

However, it turned out that Russia had learned the hard lessons of the late 1990s, grasping the importance of living within one's means. For 13 years, the government did not allow a budget deficit, and only last year, during the election period, did federal expenditure exceed revenues by 0.1 percent of GDP.

Russia's public external debt is now among the lowest in the world. According to Timur Nigmatullin, an expert at the analytical agency Investkafe, as of April 1, 2013, it stood at just $49.8 billion — with national GDP at approximately $2 trillion.

The main "thank you" should, of course, be reserved for energy consumers. Oil and gas make up more than 50 percent of budget income (based on 2012 figures), making the public finances extremely sensitive to fluctuations in world commodity prices, on the one hand, and recessions and global downturns relatively painless, on the other.

Drawing lessons from the 1990s, Russia now invests some of the surplus from the export of raw materials into various special funds, and these piggy banks certainly cushioned the 2008-2009 crisis — despite a 7.8 percent drop in GDP and a 3-4 fold reduction in world energy prices.

The economy withstood the shock through an extensive program of financial support from government reserves. That fact has been acknowledged by rating companies, which have gradually increased Russia's sovereign rating to investment grade — albeit at the lowest boundary.

Moody's assigned a rating of Baa1 with a stable outlook, while Fitch and S&P opted for BBB (stable).

"Russia is a more profitable investment today than at some point in the rosy future when the measures adopted to improve the investment climate and economic growth will kick in.

The ideology at work here is the same as on the stock market: It is more profitable to buy shares when the price is relatively low. And now costs are modest," Karina Artemyeva, head of analysis at National Rating Agency, told RIR.

Meanwhile, the share of oil and gas revenues is gradually decreasing. The government plans to reduce the figure to 8.5 percent of GDP by 2015, down from the current 10.5 percent.

However, back in 2010, then Finance Minister Alexei Kudrin predicted that the share would drop to 14 percent only by 2020.

When the Soviet Union collapsed, Russia's economic structure was quite different. It was in tune with the requirements of a planned economy, but hopelessly ill-adapted to market conditions.

It is fashionable to criticize Russia for being too slow in making progress, but much of the current system simply did not exist 22 years ago — for example, a competitive banking sector. Today, the banks have turned into the economy's vascular system.

Russia ‘has all chances’ to avoid economic recession - PM

In the first quarter of 2013, according to Deposit Insurance Agency, the total portfolio of deposits grew to 14.74 billion rubles. In February and March, the Russian public banked 11.3 billion rubles every single day: approximately double the previous year's figure.

According to market research by Romir Holding, the proportion of Russian citizens with savings has risen to its highest level in 20 years — 75 percent. And the share of those who keep money in the national currency has climbed to 80 percent.

In mid-2005, more than half of respondents stated that their families did not have any significant savings.

In the Soviet Union, there was not even a stock exchange. Nowadays, total market capitalization stands at 20 trillion rubles, or 32 percent of GDP. The government plans to return this figure to 100 percent of GDP by 2018.

Moscow has set itself the ambitious goal of becoming one of the top 10 leading international financial centers, but, so far, it lags behind in 64th place.

On February 15, 2013, the Moscow stock exchange, which was created through the merger of the Moscow Interbank Currency Exchange and the Russian Trading System, held its own IPO.

The combined exchange was estimated at $4.2 billion: a fifth of the capitalization of the Hong Kong Stock Exchange, but comparable in value to London and Tokyo.

This allows the Russian government to harbor plans to create an international financial center in Moscow, although it is understood that one successful IPO is not enough.

Another result of the restructuring was the development of the service sector. Ninety percent of the goods sold by the Soviet Union were produced domestically.

After the transition to a market economy, most enterprises were unable to adapt quickly to the new conditions, which, in the late ‘80s and early ‘90s, caused empty shelves and hours-long lines of people, even in Moscow.

Today, 99 percent of retail sales are generated by the private sector, and small business accounts for more than half of turnover. Retail chains, though, are gradually increasing their share — now almost 22 percent.

Online economy and IT sector

A few years ago, Russia set about modernizing its technological infrastructure, and government programs gave impetus to the development of the IT industry. In 2011, the online economy amounted to roughly 0.6 trillion rubles (equivalent to 1 percent of GDP), while 2012 saw the sector grow by about 30 percent.

Overall, the economy of all Internet-dependent markets amounted to 2.52 trillion rubles, comparable to 4.62 percent of GDP, as reported by RAEC director Sergei Plugotarenko. Russia's IT exports are expected to match its arms shipments by volume within 5-6 years.

In terms of the size of the domestic IT service market ($10.7 billion), Russia already ranks in the world's top 20. However, exports of Russian software are small, amounting in 2011 to just $1.4 billion.

The fact is that Russian software exporters tend to focus on developing knowledge-intensive applications for, among others, the accountancy majors and the aircraft and car industries, catering mainly to the markets in Europe and the United States.

Incidentally, in terms of broadband access, Russia outstrips its closest competitors. In India, for example, only IT clusters have developed networks (according to a UNCTAD report on the development of the information economy).

Although the Russian government has repeatedly assured that it is becoming less dependent on raw material exports, the share of primary goods in the country's GDP has not stopped rising.

But this increase is due to price dynamics rather than structural failures in the economy, insists VTB Capital's chief economist for Russia, Maxim Oreshkin.

He believes that, in recent years, growth outside the oil and gas sector in real terms has been much stronger (for example, the aforementioned IT industry).

"A de facto reversal is in progress. Hydrocarbon prices in the last two years have not risen, so we need to strengthen other areas," says Oreshkin. Despite the reduction in energy demand across Europe — Russia's main market — the country's economy is showing a modest but real rise in GDP.

Domestic operations on average yield around 20-30 percent profit, say experts, which is 4-5 times higher than the average in Europe.