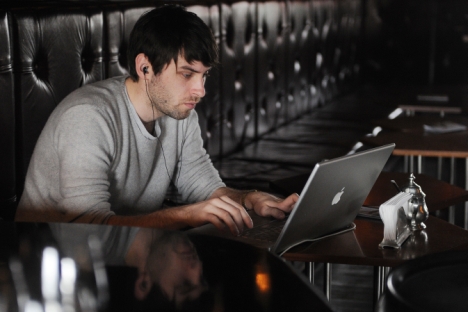 Russian Internet majors Yandex, Mail.Ru Group, Google, and the Russian Association of Electronic Communications have proposed their own amendments to the document seen by them as “harmful.” Source: ITAR-TASS

The bill in its present form allows out-of-court blocking of content over suspicions of copyright and neighbouring rights infringement.

The anti-Internet piracy bill recently adopted by the Russian State Duma lower parliament house has been met in a hostile way by both representative of the Internet business and by opposition lawmakers. They say that the bill, at least in its present wording, will only hit bona fide copyright holders, while “pirates” will be off the hook.

The bill on the protection of intellectual property rights in the Internet that was passed in the first reading last week allows out-of-court closure of websites over suspicions of copyright infringement. The bill’s authors substantiated their initiative by massive infringement of copyright in the web.

According to Robert Shlegel, a member of the ruling United Russia party faction, online piracy has reached threatening scale and the problem cannot be solved by mechanisms of self-regulation. Internet piracy inflicts 60-billion-rouble (about $2 billion) losses a year.

“What is now happening to copyright in the Internet is an utter outrage. Any search engine will give a heap of links to illegal sites offering to download any film, book, song, etc. for free. The state is no longer satisfied with this state of things, so the initiative to establish any sort of order in this sphere is only logical,” the RBC daily cites Sergei Zuikov, the director general of Zuikov and Partners Co.

The bill in its present form allows out-of-court blocking of content over suspicions of copyright and neighbouring rights infringement. Under the bill, the copyright holder can apply to the federal oversight agency in the area of communications, information technologies (Roscomnadzor) and the mass media, which has three days to inform the hosting provider (a company that provide space on a server owned or leased for use by clients) of the violation. The latter has one day to inform the site owner about the Roscomnadzor warrant to remove the questionable content. If it is not done, the hosting company is obliged to block the website by its IP address within three days.

It will be up to the Moscow City Court to rule whether the law was violated or not. And it will do it already after the site is blocked.

The website blocking mechanism provided by the bill has raised serious concern of information technologies experts. The thing is that if this procedure is applied, along with the particular copyright-protected content, Internet users will have no accesses to the entire website, since the document does not specify the procedure of URL-blockage of a particular page.

Russian Internet majors Yandex, Mail.Ru Group, Google, and the Russian Association of Electronic Communications have proposed their own amendments to the document seen by them as “harmful.”

In its statement, the Russian Association of Electronic Communications said it is worried over the fact that the bill does not oblige to specify the exact violation or infringement. It means that the copyright holder will not have to refer to any particular materials. According to the industry experts, it places the entire responsibility on a provider, which will have to find the counterfeit content by its own. If the bill is passed it its current edition, the association maintains, “It will trigger mass exodus of Russian website owners to foreign jurisdictions, and hence financial losses and large-scale infringement on the rights of law-abiding Russian individuals and legal entities.”

One of Russia’s biggest Internet companies, Yandex, has described the bill as “technically unrealizable and potentially dangerous.” According to Yandex experts, the current blocking mechanism “will lead to mass and systemic violation of rights of other law-abiding copyright holders, providers and users” and will open a path for mass misuse.

“Making a choice between the very bad and the bad,” as Yandex put it, it offered its own amendments to the bill in a bid to “reduce possible damage to the Internet development in Russia.” The company’s suggestions have it that the law must concentrate on blocking the particular copyright-protected content not to harm other bona fide sites. Yandex also recommends to make a provision that restrictions under the law could be applicable only in case when the site administration, the hosting or Internet provider fail to react to the copyright holder complaint.

Another Internet major, Google, said it was against this bill, since it allows out-of court blocking of content by communications providers and such a practice would inevitably threaten Internet resources specializing in legal distribution of content.

Mail.Ru Group shares the opinion of its colleagues and says legal action should be taken only in cases when Internet providers “fail to react to copyright complaints in reasonable time.” “All big players on the Internet market agree that anti-piracy measures and measures to protect the copyright are badly needed. But such mechanisms should be well-balanced, adequate in order not to open a path for misuse or errors,” the Vedomosti newspaper cites Anton Malgin of Mail.Ru Group’s legal service.

“Counteracting piracy by prohibitive measures, blocking IP addresses, is obviously inefficient, it would be much better to use economic measures,” Tatiana Matveyeva of Gazprom Media Digital told the Gazeta.Ru.

Opposition lawmakers also voiced concern over the state’s interference into the relations between the copyright holders and users. The say they law might be used as a tool of political censorship to block entire sites giving room to both “pirated” content and quite legal content with criticism of the authorities.

“The idea of blocking websites is absolutely untenable, since it will be the “pirates” who will come off unscathed, the Novye Izvestia newspaper cites Dmitry Gudkov, an opposition lawmaker. “The bill will hit only law-abiding copyright holders who will find themselves next door to ‘pirates’ on a web resource,” he said.

So, it looks like the bill is likely to be dramatically amended by the second reading. Thus, the Duma legislation committee noted that “the civil procedure legislation provides for no provisional remedy,” which means that it is illegal to block a website with pirated content until the court pronounces its decision in the action.