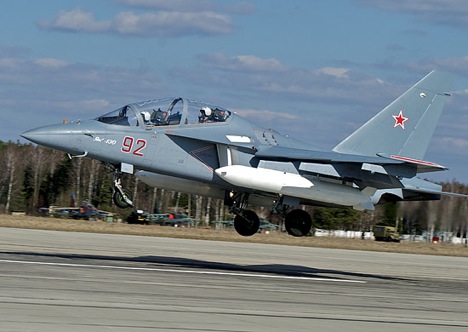 Yak-130. Source: Ministry of Defence of the Russian Federation

An unspecified number of the aircraft have been produced by aircraft-builder Irkut as part of the $550 million deal for 36 Yak-130s.

Russia has manufactured several Yak-130 combat trainer jets for Syria as part of a deal signed in 2011, but no final decision on delivery has yet been made, a Russian official source said on Thursday.

An unspecified number of the aircraft have been produced by aircraft-builder Irkut as part of the $550 million deal for 36 Yak-130s.

“They are standing outside the factory waiting for a political decision,” a source with the Russian delegation at the Paris Air Show told RIA Novosti on Thursday, without revealing the number of planes.

The aircraft are bare airframes only and have not yet been fitted with their engines or avionics, the source added.

“If a positive decision is made, the maker’s specialists will intall the engines and avionics and the planes will be delivered to the customer,” the source said.

Earlier this month, Russian Kommersant business daily reported that Russia has already received an advanced payment of $100 million from the Syrian government for the first six jets under the contract.

Russian officials have previously said Russia would not deliver any new types of offensive weapons to Syria, including the Yak-130 aircraft, but insisted they will fulfil contracts for "defensive weapons."

Intended for training pilots of advanced fighter aircraft, the Yak-130 can also be equipped with air-to-surface weapons including guided missiles and bombs, according to the Yakovlev design bureau. Damascus has previously deployed similar fighter ground-attack aircraft against the rebel forces fighting in the civil war in the country, several of which have been shown to be shot down in videos posted on the internet.

Russia has said it will deliver Yakhont shore-based supersonic anti-ship missiles and air defense missile systems and their associated equipment to Syria.

Western nations have criticized Russia for supplying military equipment to President Bashar Assad's regime, but Moscow insists all its arms deals with Damascus are legal and do not break international agreements.