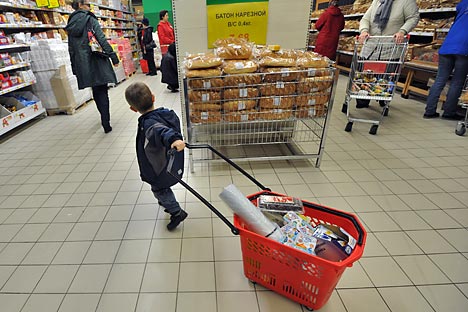 The resilient Russian consumer will ensure a respectable 3 percent growth in 2013. Source: Kommersant

The Russian consumer has accounted for 65 percent of growth over the last decade. This remains a key factor in 2013.

The recent slowdown to 1.6 percent growth in the first quarter of 2013, combined with stagnant investment and industrial production and falling corporate borrowing, has prompted the government to review its economic policy. It has also sparked talk of recession, but this is an overreaction. In my view, the resilient Russian consumer will ensure a respectable 3 percent growth in 2013.

There are two reasons for thinking the recent slowdown is not a slide to recession. First, the presidential election last year distorted the picture. There was a surge in public spending before and around the election, peaking at a 38 percent annual growth rate in March 2012, which flattered growth at the end of 2011 and in early 2012. Since then, there has been a sharp and sustained slowdown in public spending to 3 percent in April, which has depressed growth. But this spending cycle is in the past, and the distortion is already dropping out of the numbers, with growth picking up to 2.6 percent in April. Second, many parts of the economy have continued to tick along — notably the labor market, where unemployment is at a post-Soviet low and vacancies are rising, as well as the loan market.

The Russian consumer has accounted for 65 percent of growth over the last decade. It remains key in 2013. This year, I expect resilient private consumption thanks to robust wage growth, supported by consumer borrowing and falling savings.

Wage growth is running at 12 percent in cash and 4.2 percent in real terms, and real wages will likely rise slightly through the year for two reasons. First, the labor market is tighter than last year, with lower unemployment, higher vacancies and stronger private sector wage growth in key sectors such as services, finance and construction. Second, inflation should fall from the current 7.4 percent to below 6 percent later this year, helped by a better harvest and subdued monetary growth.

Russia has comparatively low household debt — 12 percent of gross domestic product — and the average Russian spends only 4.2 percent of income on debt service. With consumer borrowing running at a robust 36 percent in April and some capacity to take on more debt, I expect the net transfer of resources from banks to consumers to continue, supporting consumption.

Surprisingly, savings picked up at the end of 2012 and are 30 percent higher than a year ago. With low unemployment, savings should fall, supporting consumption.

The big risk, however, is a fall in the price of oil. Oil and gas account for two-thirds of exports and half of federal budget revenues. A sharp fall in the oil price could plunge the economy into recession. But the oil price is range-bound, given the combination of limited global spare capacity and tepid growth. Moreover, there is a headwind to a fall in oil prices from Saudi Arabia, the OPEC leader, who is publicly committed to a $100 per barrel target. It is producing oil at record levels, which gives it substantial capacity to curb output in support of its price target.

Looking ahead, this consumer-driven growth model is ultimately unsustainable. Companies cannot afford to keep paying wages that increase faster than productivity growth. Consumers cannot increase borrowing and run down savings continually. I think Putin's strategy of moving to a growth model in which investment plays a more central role makes sense. But this structural challenge is more important for future growth. In 2013, the Russian consumer will again save the day.

First publsihed in The Moscow Times.