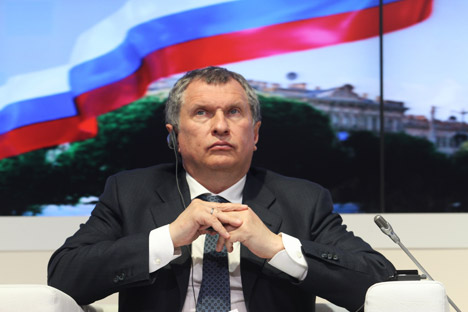 Rosneft’s head Igor Sechin said the contract envisages the export of 365 million tonnes of oil to China over the next 25 years.

Rosneft’s head Igor Sechin said the contract envisages the export of 365 million tonnes of oil to China over the next 25 years.

The deal will reshape the geography of oil exports from Russia, currently the world’s largest producer of crude. Most Russian oil currently goes to Europe via a network of pipelines from West Siberia, while only a fifth of it is exported to Asia.

In 2009, Russia completed construction of a 2,700 kilometer (1,700 mile) pipeline across Siberia to China’s Manchuria region.

In April, Rosneft and CNPC signed an agreement to deliver 37 million tonnes of oil a year.

The issue of increasing exports of Russian oil to China has been repeatedly raised this year. Rosneft’s intention to boost oil supplies to China has been underpinned by opening the second line of Russia’s East Siberia-Pacific Ocean (ESPO) pipeline in December 2012.

“Expansion of cooperation between Rosneft and China is utterly positive for the company, as it creates additional market outlet, which is important given the aggressive growth of its resource base,” according to Ivan Anoshkin, an analyst at Invetscafe.

Given that the projected capacity of the ESPO stands at 31 million tonnes a year, Rosneft needs to use alternative export routes. These might include via the pipeline network through Kazakhstan or via the Kozmino oil port.

“However, as a vector to the tightening energy relations between the two countries, the optimal variant looks to be to construct additional pipeline capacity,” the Investcafe analyst concluded.