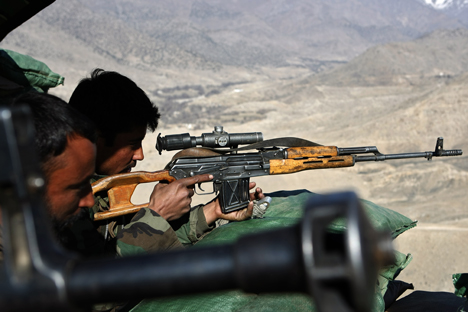 Various modifications of the SVD and its local versions can be found across the globe. Source: AFP / East News

In June, the Russian Armed Forces celebrated the 50th anniversary of the induction of the Dragunov sniper rifle (SVD). RIR gives you a lowdown of the designation of this powerful weapon, its modifications and prospects.

In the late 1950s, a design competition was held for a self-loading (semi-automatic) sniper rifle for the Soviet Army. The winning team was led by designer Evgeny Dragunov. In 1963, the rifle, named after its developer (literally the Dragunov sniper rifle), was inducted into the military. A special sniper cartridge with a steel core was developed for the rifle; despite that, it is capable of using the entire range of domestically-manufactured 7.62х54R cartridges.

The tactical role of the SVD rifle in the Soviet and then the Russian Army is somewhat different from the traditional ‘sniper’ role in other armies. The SVD rifle’s main designation is to extend the effective range of a rifle unit to beyond the standard range of automatic weapons, up to 600-700 metres. The fact that the SVD is often used as a sniper rifle implies that the Russian security and defence agencies have had no special weapon of this kind until recently, although the SV-98, which has the same caliber, may eventually change the situation when it is inducted into the army.

The SVD proved itself in the Afghan and Chechen wars and throughout many military conflicts around the world. It is one of the most coveted military trophies. Foreign specialists used to write about the SVD: “There’s nothing excessive about it, nothing sophisticated or fragile: you aim and shoot.” In 1989, the Swiss military magazine Schweizer Waffen-Magazin published an article about the SVD, which read: “The Soviet Dragunov sniper rifle using the classical Russian 7.62×54mmR cartridge is a rare piece in any western weapon collection. We tested one of them… It is very well designed. Contrary to the rules for design of precision weapons, the former marksman Dragunov made his rifle a light weapon. NATO has a spread requirement within 15 inches (38.1 centimetres) for all shots in a 10-round group fired at targets at 600 yards (548.6 metres). The Soviet SVD rifle was well within this range. The recoil is moderate, despite the powerful ammunition. The Dragunov sniper rifle has a reputation for being able to operate in adverse conditions without requiring any special care.”

The SVD has the same action as the AK-47; however, it has a modified gas system. The Dragunov rifle is issued with a 4x magnification optical sight; a night sight can be fitted to it. Some of the early variants included wooden grips and butts; however, newer models have plastic grips, whereas butts can be made from wood or plastic. The SVDS is fitted with a separate pistol grip made of plastic and a side-folding metal butt. A characteristic feature of the SVD is that it has a special device for fitting a bayonet on to its barrel.

Various modifications of the SVD and its local versions can be found across the globe. It is used in Russia and the former Soviet Union, India, Finland, Hungary, Romania, the Czech Republic, Slovakia, Poland, Bulgaria, Albania, China, Mongolia, Afghanistan, Iraq, Iran, Turkey, Venezuela and Nicaragua.

The Dragunov has had many modifications. The SVDS with a shortened barrel and a side-folding butt was developed for airborne infantry. The civil hunting rifles Medved (which is not produced any longer) and Tigr are still in strong demand.

SVD copies and clones are produced abroad; some of them are very similar to the original (the Chinese 7.62х54R Type 85); some are imitations based on the Kalashnikov assault rifle (the Yugoslav M91).

Izhmash is Russia’s biggest manufacturer of combat automatic and sniper weapons, guided artillery shells and civil weapons: hunting and sporting guns, weapon mounts and tools. The company was founded in 1807. Izhmash supplies its products to 27 countries, including the USA, UK, Germany, Norway, Italy, Canada and Thailand.

The SVU (shortened sniper rifle) has a bullpup layout. Its developers managed to cut 100 millimetres off the barrel without compromising the weapon’s basic characteristics. The rifle also features a sound suppressor to help obscure the sniper’s location in close quarters combat. The SVU is used by special operations units of Russian security agencies.

In the early 1990s, the SVU-AS (shortened semi-automatic sniper rifle with a bipod) was developed for the Interior Ministry’s special operations units.

Last month, Izhmash presented the prototype of the VS-121 sniper rifle, which builds on the SVD. The bullpup layout makes the new rifle smaller, lighter and better balanced. The VS-121 is equipped with a tactical silencer. Any contemporary sniper accessories can be fitted on to it. The VS-121 is currently undergoing tests.

Rate of fire: 30 rounds per minute

Firing rate: up to 30 rounds per minute

This article uses materials from the official Rostec portal, the Oruzhie Rossii (Weapons of Russia) website and publications in open sources.