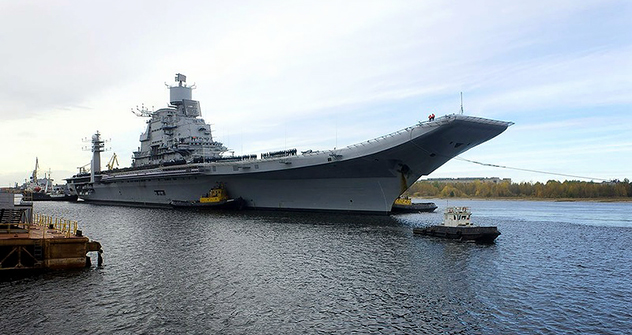 A mixed Russian-Indian crew is on board the warship, while the Indian sailors learn how to operate the vessel.

The Vikramaditya (formerly Admiral Gorshkov), which has been refitted at the Sevmash shipyard in northern Russia, is due to he handed over in fall 2013. A mixed Russian-Indian crew is on board the warship, while the Indian sailors learn how to operate the vessel.

“Everything is alright. The ship will be delivered [to India] this fall, we cannot afford any more delays,” Sevastyanov said on the sidelines of the International Maritime Defense Show (IDMS-2013) in St. Petersburg.

The refit of the ship has lurched from one crisis to another since India and Russia signed a $947 million dollar deal in 2005 for its purchase and refit. Delivery has already been delayed three times, pushing up the cost of refurbishing the vessel to $2.3 billion, amid acrimony between Moscow and New Delhi over the contract.

The Vikramaditya was supposed to have been handed over on December 4, 2012, after earlier delays, but sea trials last September revealed the ship's boilers were not fully functional.

The source of the problem, which reduced the ship's maximum speed, was due to use of low-grade Chinese-made firebricks in the boiler insulation instead of asbestos, according to Russian shipbuilders.

The Vikramaditya was originally built as the Soviet Project 1143.4 class aircraft carrier Admiral Gorshkov. The ship was laid down in 1978 at the Nikolayev South shipyard in Ukraine, launched in 1982, and commissioned with the Soviet Navy in 1987.

Renamed after the collapse of the Soviet Union in 1991, Admiral Gorshkov sat in dock for a year for repairs after a boiler room explosion in 1994. In 1995, it briefly returned to service but was was finally withdrawn and put up for sale in 1996.

India has already started taking delivery of MiG-29K naval fighter aircraft for the Vikramaditya, which were ready before the refit was completed. The MiG-29Ks will operate in STOBAR (short take-off but assisted recovery via arresting wires) mode.