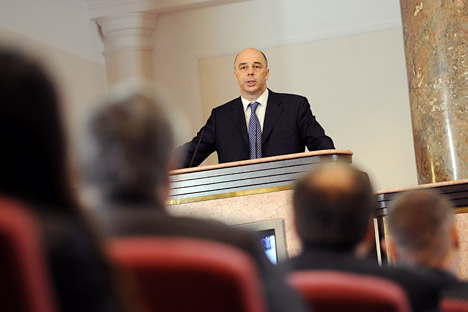 Finance Minister Anton Siluanov said the budget parameters, even based on the unfavourable macroeconomic forecast, do not guarantee it would be fulfilled. Source: ITAR-TASS

Many argue that the authorities are undertaking too many social obligations, and should such a policy continue, the government will find it more complicated to draft budgets.

Not only experts, but even ministers, doubt the country’s budget for 2014-2016 that the government approved a week earlier, may be realistic. Experts suggest the government should review the budget by increasing the state debt. The government, however, has a task to fulfil the promises President Vladimir Putin gave during his election campaign. A lack of manoeuvre along with the lower rate of the economic growth and the stagnating oil prices mean this year disputes around the budget will be bigger than usual.

All participants in the government’s meeting, who spoke in the brief open part, doubted the 2014-2016 budget may be fulfilled. Finance Minister Anton Siluanov said the budget parameters, even based on the unfavourable macroeconomic forecast, do not guarantee it would be fulfilled: the forecast is based on “rather optimistic suppositions” that the world growth will begin in the second half of 2013.

Realistically, it means a refusal from the policy, which earlier the Finance Ministry had been promoting and Russia’s Prime Minister Dmitry Medvedev had been supporting: to increase the reserves where prices are high and to spend exclusively where oil and gas revenues are falling.

The document, which is not published yet, has already become a reason for a public conflict inside the government: the social block has accused the financial authorities of saving money at the expense of the disabled, orphans and the programme to support families with children.

Traditionally, the finance ministry is playing a role of a “budget Cerberus,” which would not let other ministries and authorities have bigger expenses, thus causing conflicts around drafting of the country’s major financial document, Lenta.ru portal writes. However, this year, the finance ministry is facing an extraordinarily complicated situation.

First of all, the country’s economic growth is slowing down, thus threatening the budget revenues. Secondly, the state treasury over next three years may lose almost 887 billion roubles due to the outstanding privatisation. Besides, even the 2013 budget may have a gap: the finance ministry forecasts it may happen if most negative risks of the economy’s development come true.

How to stimulate the Russian economy

It is especially complicated to follow the obligation to fulfil President Vladimir Putin’s election promises. Based on those promises, he inked several pre-election orders in May of 2012 and has already criticised the government several times to insufficient efforts to carry out the orders.

The orders, among others, are on investment of funds in development of the Far East and Trans-Baikal regions, on almost doubling of wages to state employees, on organisation of 25 million high-paid jobs and on many-billions’ investments in the infrastructures. At the same time, Putin himself promise at first to keep a balanced budget, and later to eliminate a deficit, thus the finance ministry is unable to increase the expenses by mere borrowings in the market.

The Vedomosti daily writes the country’s requires two trillion roubles over next three years to fulfil Putin’s orders. The newspaper offers a way to save money: the Vedomosti writes the government will cut expenses for healthcare and education.

Many experts share the view that Russian authorities are undertaking too many social obligations, and should the policy of the kind continue, the government will find it more complicated to draft budgets.

“There have been so many promises, that the current budget parameters would not allow their fulfilment,” the Nezavisimaya Gazeta quotes Natalia Akindinova of the Higher School of Economy as saying. Since the Reserve Fund is not bottomless, she suggests using an active programme of state borrowings. Nothing prevents from it - over near future the borrowings would not exceed 15 percent of the GDP, which is not much, in fact.

“The risks of lowering economic growth are very high, and the lack 500 billion roubles in the federal budget’s revenues are not the limit,” she said. Within this year, the government will not be able to keep the desired revenues of the Reserve Fund from the high oil prices. The reasons being the excessive and non-reducible social obligations.

The budget’s construction has also hidden risks, the RBC daily reports MDM Bank’s CEO Oleg Vyugin as saying. The construction is based on the top level of the realistic macroeconomic forecast.

“Over the period in question, the growth of the global economy and financial markets will be rather limited. This means, the raw materials’ price forecast is rather optimistic and may be corrected toward reduction only. Even despite the moderate planning of the budget part, the budget bears the risks of non-fulfilment due to lower oil and gas revenues,” Vyugin said.

Director of the Institute for Strategic Analysis Igor Nikolayev is sure claims to the country’s major financial document for the next three-year period would only grow. The document is rather disputable, Nikolayev said. One of the reasons being the draft budget is based on the expectation Russia’s economic growth would continue. However, the situation in the economy is quite the opposite. In May, the Ministry of Economic Development fixed the growth rate was down by one percent. Over the year, the growth may reach the zero level.

Nikolayev cannot realise what the government’s officials mean by planning the GDP growth in 2014 at 3.7 percent. This is unreachable for the Russian economy. The price of the mistake is about 500 billion roubles, which the country may fail to receive. “The budget deficit rate then will change dramatically. The deficit may make not 0.4 percent, but between one and 1.5 percent of the GDP,” the economist said.