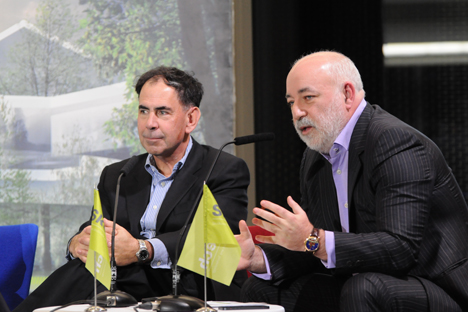 Skoltech President Edward Crawley (L) and head of the Skolkovo Foundation Viktor Vekselberg during the forum in Skolkovo. Source: PressPhoto

Analysts believe elimination of mandatory contributions to the endowment fund will not cause Skoltech to collapse.

President Vladimir Putin has canceled the instruction issued by his predecessor, Dmitry Medvedev, which required state-run companies to make contributions to the endowment fund of the Skolkovo Institute of Science and Technology (Skoltech).

The new order issued by Putin was a “For Official Use Only” document. Putin’s spokesman Dmitry Peskov confirmed that state companies will now be able to finance Skoltech projects on a voluntary basis.

The Skolkovo Foundation and the Massachusetts Institute of Technologyestablished Skoltech in 2010.

The original plan was to accumulate up to 30 billion rubles (about $1 billion); officials believed state corporations would continue injecting money into the project after that term expired.

So far, however, the endowment fund has accumulated 4 billion rubles ($130 million), and no contributions were made in the first half of 2013.

Skolkovo residents were not shocked by Putin’s decision. One top executive of the project told RBTH that Skoltech had been notified a few months beforehand. He said that the endowment fund also benefited from private contributions, so, if state-run companies wished to discontinue their cooperation, the situation would become less convenient but not critical.

Skoltech is just one of Skolkovo’s many initiatives, and it does not play the core role in the innovation center. State financing of other programs will continue; budget allocations have been approved for the period through 2015, and orders have been placed by private customers as well.

Vedomosti reported that the move to cancel mandatory contributions to the Skoltech endowment fund was initiated by state companies, which complained that, despite their financial injections, they had no right to manage projects, commission research, or have their specialists trained at Skoltech.

A top manager of a state company stated: “That’s why they decided to encourage innovation independently. Transfers to Skoltech looked like a tribute rather than investment.”

Pavel Kudyukin, assistant professor in the state and municipal administration department of the Higher School of Economics, welcomes the decision to change Skoltech research to private financing only; yet it should be clear how the scheme will work, he believes.

There is a chance that there will be no official document requiring state companies to pay. Even so, unofficially, they may be “forced” to make contributions. Transfers may be made voluntary, based on an “imperative recommendation.”

In this case, elimination of the payments will have been a formal move and transfers would continue — though it would be harder to control money flows.

Kudyukin believes that the negative impact on the project will only be obvious in about a year’s time, when financial receipts during the two periods—prior to abolition of the document and after it — can be compared.

Karen Kazaryan, chief analyst at the Russian Association for Electronic Communications (RAEC), believes that the state will not leave Skolkovo unsupported.

“In the short term, the federal budget will pay to make up the shortage. In the future, however, Skolkovo will not do without an endowment fund if it wants to pursue independent projects, the way the leading research centers in the U.S. and the U.K. operate,” said Kazaryan.

“However, the fund should be formed by sponsors that are genuinely interested in the projects, so as to ensure control over spending and encourage competition.”

Alexander Moskalenko, president of GCE Group, explains that the state will have to keep investing in research and development anyway, in order to ensure a high level of innovation in Russia, which can be attained by combining applied research and fundamental research.

“There is fundamental research, there is applied research, and there is the R&D level that aims at creating viable models. Fundamental studies are there to satisfy human curiosity, because their results have no applied relevance, at least today,” said Moskalenko.

“Applied research aims to bring fundamental science closer to practical application. It produces ideas rather than technologies that work. For example, the graphene was created at the level of applied studies but, in order to use it in production, we require additional research, because this material is not ready for use yet,” the GCE president said.

According to the expert, Russian corporations invest in research and development in order to make a profit — but you cannot win new market products this way.

“You can invest all you want, but there will be no breakthrough as long as you build your studies on old knowledge. If people don’t know of the laws of relativity, they will never come up with the nuclear bomb. Nevertheless, corporations don’t invest in fundamental science. Commercial organizations are created to make a profit and they want a return on their investments. They want to see a new product or at least a new technology,” Moskalenko said.

“We carry out research to fulfill our customers’ orders, and they all want specific results: a system, product, or tool that is ready for use. If we finance research independently, we still have plans to market the result,” said Moskalenko.

Researchers spend rather than make money, but it is this sort of investment that encourages new technologies. Still, no businessman wishing to market a new product fast will agree to finance such research. The Russian Academy of Sciences, financed entirely by the state, is a characteristic example.

“At Skoltech, we saw an attempt to make state companies pay, even though any commercial organization should invest in something to profit from. Long-term investments in ‘some project’ or ‘just in case’ won’t suit corporations, which need to see a return on their money. The Skoltech case showed the awkwardness of major corporations, which yield to campaigns to squeeze money out of them and pay in order not to have fights,” said the GCE president.

“Even so, this foundation should be financed by the state from extra reserves or targeted funds.”