Russia has disposed of over 75 percent chemical weapons stockpiles 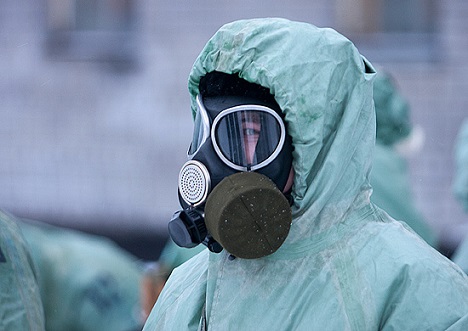 Under the relevant federal programme, Russia has to dispose of all chemical weapons by December 31, 2015. Source: Ministry of Defence of the Russian Federation / mil.ru

30 tonnes of “category one” chemical weapons, which make up over 75 percent of the declared stockpiles have been destroyed.

Russia has disposed of 30 tonnes of “category one” chemical weapons, which make up over 75 percent of the declared stockpiles, Viktor Kholstov of the Ministry of Industry and Trade, said.

He attended the 73rd session of the Executive Council of the Organisation of the Prohibition of Chemical Weapons (OPCW) in The Hague.

“We reported at the session that Russia has four active chemical weapons disposal plants,” Kholstov told ITAR-TASS in an exclusive interview on Monday, July 22. “These are Maradykovsky, Pochep, Leonidovka, and Shchuchye. Two facilities - Kambarka and Gorny - have already disposed of all of their stockpiles. The four abovementioned facilities are operating in accordance with the plans submitted by Russia to the OPCW and are disposing of the chemical weapons as scheduled,” he said.

Kholstov noted that the construction of the last, seventh, chemical weapons disposal plant is drawing to an end in Russia - Kizner in Udmurtia. “It will start disposing of chemical weapons in the fourth quarter of the year,” the official said.

He noted that facility at Leonidovka has started recycling “complex weapons” that contain both toxic agents and bursting charges. Their disposal requires the use of complex and costly technologies as well as enhanced personnel and environmental safety measures. The plant has already disposed of more than 1,400 such weapons.

A similar disposal process will be launched at Maradykovsky in the fourth quarter of this year.

The plant, where more than 40,000 aerial bombs and missile warheads were stored since 1953, had finished destroying 232.6 tonnes of sarin and more than 150 tonnes of yperite-lewisite mixtures by the star of this year. It had destroyed over 90 percent of 4.5 tonnes of V-X ammunition and is disposing of soman, one of the most dangerous nerve agents. Of 1,972.1 tonnes of this chemical agent, 864.5 tonnes had been destroyed.

The Maradykovsky chemical weapons disposal plant in the Kirov region was reported to be in Phase Four of the federal chemical disarmament programme. By the end of Phase Four, the plant will have disposed of over 6,900 tonnes of toxic agents kept in its arsenals since the middle of the 20th century.

Maradykovsky is the third Russian facility that began full-scale disposal of chemical weapons in September 2006, and the second-largest by the amount of toxic agents stored in it. Over 40,000 aerial bombs and warheads stuffed with mixtures of toxic agents had been stored in its arsenals since 1953.

Maradykovsky became operational on September 8, 2006 and became Russia' s third chemical weapons disposal plant. Over 6,900 combat nerve gases - V-x, sarin, soman and mixtures of yperite and lewisite - in over 40,000 aerial bombs and warheads had been kept there since 1953. The plant started destroying V-x gases first.

The chemical weapons disposal plant in Gorny, Saratov region, was the first Russian facility to start disposing of toxic agents in December 2002. In 2005, it finished disposing of more than 1,143 tonnes of yperite, lewisite and their mixtures.

The authorities said the plant in Gorny would be decommissioned by 2017 and converted into a fully state-owned federal enterprise in order to ensure better state control over the use of products resulting from the recycling of toxic agents, keep employment in the area and generate tax revenues.

The facility will be put out of service in the next two years. It will take another three years to convert it to new uses. During this time, its employees will keep their jobs.

The bulk of the decommissioning work would be done by specialists from a company to be selected through a tender. Currently, three companies are seeking the contract.

The Pochep site in the Bryansk region stored over 7,500 tonnes of nerve gases and plaid a special role in the final stage of the federal chemical disarmament programme. The site contained almost 19 percent of Russia's war gases. All of them were disposed of within the period of time prescribed in the Hague Convention.

The facility in the village of Leonidovka, Penza Region, is also involved in the implementation of the programme. Another facility is in the town of Shchuchye, Kurgan region.

The final stage of the programme envisions the destruction of 100 percent of chemical weapons by the end of 2015. The plants in the town of Pochep, Bryansk region, and the town of Kizner, Udmurtia, will take part in the implementation of this stage.