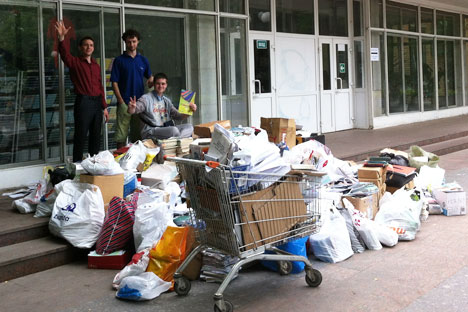 'Clear Action' project has already sent off about 10 tons of paper to be recycled. Source: Press photo

In an attempt to create greater environmental consciousness, students at the Moscow Institute of Physics and Technology are leading by example with a recycling campaign in their institute and in the city nearby.

The idea of a recycling system was suggested to Anton Fedorenko—a young scientist and a Moscow Institute of Physics and Technology (MIPT)student—by his friend last winter, and, as easy as April, he and his friends had presented a recycling project to Potanin Scholarship Charity Foundation, which helps outstanding students improve themselves. With the financial help of this foundation, as well as partial aid from the Institute, project “Clear Action” (“Chistoye Delo” in Russian) was born.

First, students designed a special container for paper waste. There were many difficulties, including long delays with assembly, problems with finding a place for installation and subsequent failure with the storage location. Still, paper collection became rather popular. Clear Action no longer needed an advertisement: Students would come up every day with piles of paper, while others would come to offer their help.

Thus, after a long discussion with the Institute’s administration, it was decided to build a 15,000-gallon cabin for the collection and storage of paper on campus. Specially designed with attention to detail, the cabin was ready by the end of this academic year.

“I can’t say it was very difficult to do this. Of course, we had some minor problems, but we were ready for them; other students and even workers from a construction site nearby were glad to help us,” says Anton.

Now this collection center works day and night, and everyone can leave paper in its special window. Regularly, workers come and pack the collected paper accurately. When the volume of paper becomes large enough, a truck moves it to one of the recycling centers nearby.

One ton of wastepaper saves 10 trees. There are around 3,000 students at MIPT and several offices, so around 22 pounds of paper are spent each year. This means that one year of recycling paper on MIPT campus will save about 300,000 trees.

“By the way, there were some fun moments. Once, a girl asked me to let her look through the tossed paper, because she thought she threw her passport in with it as well. Or when we were helping a local publishing office and, while we were moving packs of paper, I found an old envelope with 10 dollars in it. That was a bit strange, but we gave it back to the office,” the MIPT student says.

By now, Clear Action has sent off about 10 tons of paper to be recycled.

In the near future, Clear Action plans to buy a press for plastic and install special containers for plastic bottles around the city of Dolgoprudny, where MIPT is located. Some of these containers have already been placed on the campus.

“We are discussing this with the administration of the city. Our project is not just ecologically friendly, but it also could bring in income. So, we already have some companies ready to cooperate,” says Anton. According to calculations, it will cost around 1.1 million rubles ($34,000) per 100 000 citizens.

Click to enlarge the image 'Clear Action' of the MIPT

By their plan, people will just throw plastic bottles into containers next to ordinary waste baskets, where, once a week, a collector will come by and take the recycled plastics to the press. After this, pressed plastic will go to one of the recycling centers in Moscow. Clear Action is planning to enlarge its territory of collection and acquire a special recycling machine. It will simplify the entire process.

In addition, to ensure that the system continues to work even if the founders move away, the plan is to grow into a stable project with professional workers and cleaners, rather than volunteers or students who can suddenly give up on their duties.

“It’s not as difficult as it seems. In a number of cities—for example, in Kharkov [Ukraine] where I am from—this practice is used successfully,” says Anton.

Yet this project is not just about ecology. One of its co-founders started researching the bacteria contained in wastepaper. In addition, Anton himself is also working on another project named "Emission," based on the works of Nobel Prize winner Luc Montagnier and promising a breakthrough in agriculture and medicine.

Anton is going to continue the Clear Action campaign, even after graduating from the Institute: “We will work for it as long as we are here. And even if we would move away, the project would be settled enough to continue working without us.”