Why Russia is bolstering its Pacific Fleet 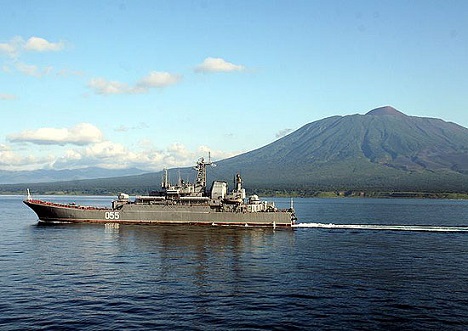 The Russian Navy will take delivery of 36 new warships and auxiliary vessels in 2013. A significant portion will be used to bolster the Pacific Fleet. Source: Ministry of Defence of the Russian Federation / mil.ru

In the light of the Asia-Pacific's growing economic and political significance, ensuring the security of fishing and merchant vessels and protecting the country's maritime borders are becoming the Russian Navy's top priorities.

Russia's Pacific Fleet was involved in two major exercises in July: a surprise week-long operational readiness inspection and a joint drill with the Chinese Navy in the Russian Far East. Both events testify not just to Russia's intensified activity in the Pacific but also to the growing significance of that region in international politics on the whole.

The booming economic growth of Asia-Pacific countries leads to conflicts of economic interests, the forming of new regional associations, and the flaring up of territorial disputes.

The presence of seabed oil and gas reserves contributes to increased maritime activity in the region, if not to greater tension between the different regional powers. The exact volume of the said reserves and their economic value are yet to be assessed. However, given the unstable situation in the Middle East, the Asia-Pacific hydrocarbon reserves may prove to be of considerable interest to regional and extra-regional players alike.

Strengthening of the Chinese Navy

The current geopolitical situation is forcing Asia-Pacific countries to bolster their naval power, since a major stretch of state borders and trade routes in the region are maritime. Particularly noteworthy in this respect are China's efforts to strengthen its Navy.

China may already be considered the world's third naval power after the USA and Russia, if not in absolute terms then in terms of its potential. The service entry of the nation's first aircraft carrier Liaoning in September 2012 became a milestone achievement in the history of the Chinese Navy. The Chinese government has been repeatedly stressing the Navy's key role both in increasing the PLA's combat capability and in developing the country's economy.

US presence in Asia-Pacific

The USA is also actively involved in the Asia-Pacific processes. There is an obvious military aspect to President Barack Obama's pivot to Asia strategy. Washington has notably built up its military presence in the region in recent years. Examples include the recent deployment of a USMC detachment to Darwin, Australia, as well as the return of the US Seventh Fleet to Subic Bay in the Philippines (which used to be a US Navy base until 1992). Although it is as yet early to be speaking of an open confrontation between naval powers in the Pacific, let alone of an arms race in the region, the situation is evidently becoming tenser than it was but a decade ago.

In this situation, Russia's on-going effort to bolster its Pacific Fleet appears to be fairly logical.

In the light of the Asia-Pacific's growing economic and political significance, ensuring the security of fishing and merchant vessels and protecting the country's maritime borders from a variety of threats are becoming the Russian Navy's top priorities.

According to Russian Navy Deputy Commander-in-Chief Vice-Adm Alexander Fedotenkov, the Navy will take delivery of 36 new warships and auxiliary vessels in 2013.

Fedotenkov does not specify how these new ships will be distributed among the country's different fleets, but it is safe to assume that a significant portion will be used to bolster the Pacific Fleet. Furthermore, the first French Mistral-class amphibious assault ship of the four on order should be added to the Pacific Fleet inventory in 2014.

That said, Russia is not interested in escalating tensions in the Asia-Pacific because such a scenario would pose a serious threat to its own national security.

On the contrary, the presence of a third, neutral naval power in the region might become a restraining factor in a possible standoff between the USA and China.

In addition, it is worth remembering that Russia has been investing heavily in strengthening and developing cooperation with Asia Pacific countries.

It involves joint military drills and exchange of experience, as well as arms trade. According to a report on the international arms market published by the Stockholm International Peace Research Institute, 65 percent of all Russian armament exports between 2008 and 2012 went to Asia and Oceania. The share of naval weapons systems in total Russian arms exports currently amounts to some 11 percent. Russia's efforts, hence, to develop, modernise and rearm its naval force will help Moscow to promote trade with Asian countries and further expand economic cooperation in the region.

Russia is also keen on participating in bilateral and multilateral naval exercises. The most representative upcoming events of this kind to be attended by Russian troops will be the International Fleet Review Sydney in October 2013 and Exercise RIMPAC 2014.