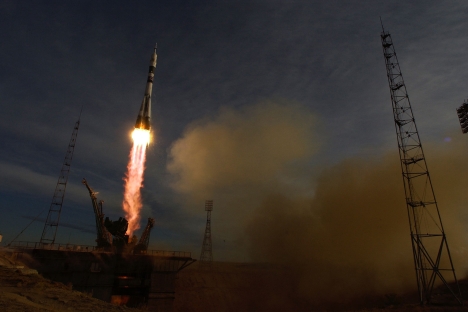 The best precondition for a future revival of the Russian space industry would be the development of new space vehicle designs based on advanced technology. Source: NASA / Press photo

Budget cuts in the country’s space programme may serve the struggling sector well in the long run.

Russian Space Agency (Roscosmos) head Vladimir Popovkin was recently told by the finance minister that the budget of the federal space programme in 2013-2020 would be cut by a total of 63.5 billion roubles (around $19 billion).

“The primary factor in the [proposed] deviations from the maximum budget funding figures […] was a recalculation of the dollar exchange rate applied to the rent being paid for the use of the Baikonur [cosmodrome in Kazakhstan by Roscosmos],” reads the Finance Ministry's diplomatically vague explanation.

To understand what is going on in Russia's space sector it will be useful to look back at the history of global space exploration. As soon as humanity's dream of space flight got realised in the USA and the USSR, it became clear that space exploration could take one of the two possible routes. You could go down the road of “breakthrough” launches and image-boosting programmes whose scientific and economic value was next to zero. Or you could be more pragmatic, rationalising your space priorities based on the defence-and-security and/or economic needs of the day.

The USSR in the meantime was pursuing the option of “glorious space achievements.” Says Lt-Gen Georgy Lysenkov, formerly first deputy commander of the Soviet Defence Ministry's Space Units: “Our leadership never spared money on space exploration. With defence projects in particular, any attempt to mention excessive programme costs would easily lose you your job.”

The times have of course changed. Roscosmos privatised the sector in the early 1990s, setting up a series of joint ventures with EU and US partners. The START I disarmament treaty of 1991 allowed Russia to convert its Soviet-era SS-19 intercontinental ballistic missiles into Strela and Rockot commercial launch vehicles.

Nevertheless, the Russian government's love for flashy effects is simply not giving in to sensible pragmatism when it comes to space exploration. To take but one example, is the GLONASS satellite-based navigation system a necessity for Russia's economy? It certainly is. However, the GLONASS programme is organised in such a way that each and every vehicle across the country is now mandated to have a GLONASS receiver on board. But will civilian users really benefit from choosing GLONASS over the US GPS Navstar system? Not in the foreseeable future.

Russia has no rivals in space tourism

As a consequence, the GLONASS system, which is so urgently needed by the Russian Army, emergency relief units and other government agencies, has been failing for years to reach its full operational strength of 24 serviceable satellites in orbit. It is no surprise then that the Finance Ministry in August 2012 froze the GLONASS budget at the 2011 level of only 19.3 billion roubles.

It would be quite difficult to argue with Ivan Moiseyev, head of Russia's Space Policy Institute, who points out that the country's space ambitions should be measured against its financial capabilities: “We want too much: a new launch vehicle, a new piloted spacecraft, a new spaceport, a Lunar base; but the sector's productivity is appallingly low. It would make more sense if we invested in modernisation and improvements to production effectiveness.”

Colonisation of the Moon and Mars, which used to be the Holy Grail of the early space age, will undoubtedly happen sooner or later. Today, however, the best precondition for a future revival of the Russian space industry would be the development of new space vehicle designs based on advanced technology – even though for some this might signal a serious departure from the grandiose fantasies of the past.